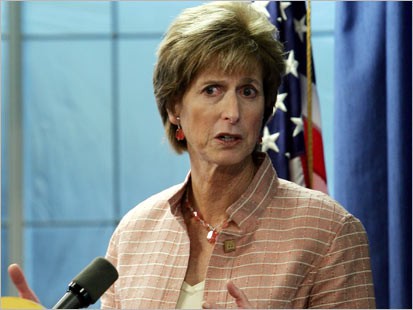 Whoever the Democrats nominate for president this year--Hillary Clinton or Barack Obama, the initial excitement going into the fall campaign will be attached to that party's candidate. That's because, as everybody knows, either nomination will be historic, first woman nominated by a major party or first African-American.

John McCain, straight-talking war hero though he is, will be hard-pressed to negate the Wow Factor the Dems will have going for them. And, as we have seen from the Obama phenomenon, the Wow Factor can propel a candidate to a lot of victories.

So, what should McCain do?

Simply, the Arizona senator, who has always shown a penchant for departing from form, should toss convention aside.

Ordinarily, McCain, who it's alleged is not a conservative Republican, would be expected to choose a vice presidential running mate to solidify his standing among the Limbaugh crowd going into the fall campaign. Advisors will urge him to shore up the base.

Many think that Mike Huckabee has been angling for second place on the ticket by remaining in the presidential race, demonstrating his appeal to social conservatives...although arch conservatives like Limbaugh hate him. If that's Huckabee's game, he needs to get advice from other people. By remaining in the race, he will likely erase the respect thus far accorded him by McCain, turning himself into a thorn in the flesh for a presumptive nominee anxious to unite the party for the fall, if he stays in.

I've previously suggested that a great potential veep candidate to run under McCain could be Senator Joe Lieberman, the one-time Democratic nominee for the same office.

But, there's someone else who, I suspect could help McCain even more: Former New Jersey Governor and EPA administrator Christine Todd Whitman.

Yes, Whitman is considered by some in her party to be a liberal. Her views on abortion are anathema to social conservatives, to be sure.

But she's a fiscal conservative, a leader of the Republican Leadership Council, and someone who has a demonstrated ability to win votes from independents and Democrats. She has a good record on environmental issues, something that, along with McCain's position on global warming, could negate the Democratic advantages on these matters.

She would do two other things for a ticket topped by John McCain: (1) She would fire the imaginations of the electorate, demonstrating that the GOP too, has people who previously couldn't have been considered for the presidency or the vice presidency, namely, a woman. Having Whitman on the ticket would somewhat the history-changing advantage conferred on the Democratic nominee, whoever that turns out to be. (2) She would bring New Jersey and perhaps other states in the Northeast into play for the GOP, something that hasn't happened for that party in decades.

Some will argue that if McCain, viewed as suspect by some conservatives, brought on a pro-choice running mate, he would be abandoned by conservatives on election day. I don't think so. Where will those conservative votes go in November?

Impressive though Barack Obama is, I don't think that the hard core conservatives Republicans have as their base are going to vote for him this fall.

In the end, the battle will be for the votes of independents. Christine Todd Whitman will help John McCain get those votes.
Posted by Mark Daniels at 12:23 AM