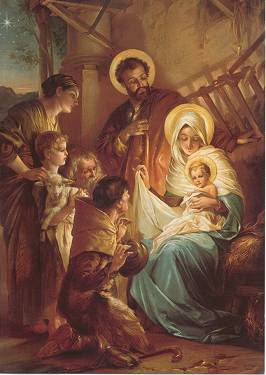 In just a few moments, I'll be driving to our church building to get ready for tonight's Christmas Eve Candlelight worship. This is really my favorite service of the year, the best part of Christmas for me.

Near the end of the service, I'll read the prologue to John's Gospel while everyone in the sanctuary holds a candle. Then, by the same candlelight, we'll sing the Austrian hymn, Silent Night. (Stille nacht, heilige nacht...)

Silent Night well evokes the understatedness of the first Christmas. Like all true things, I think, the importance of the first Christmas was mostly unseen and unrecognized by the people of Bethlehem and the surrounding territory. It could be perceived only through the eyes of faith, though none of it happened in secret. (That remains true to this day.)

God did choose to send an angel choir to announce the birth of the world's Savior to some shepherds. But isn't that just like God? I mean, for Him to send word to shepherds.

He's always choosing the lowly, the despised, the victims of prejudice, injustice, and poverty to be His witnesses.

It makes sense when you think about it: the proud and powerful, the people who think that their wealth makes them all that could hardly be counted on to take notice of the birth of Jesus, let alone tell the neighborhood. They would be too dazzled with themselves and their baubles to care. It's easy to live in denial about one's need of a Savior when your ego and your pockets are stuffed. Not so for those who live in poverty or deal with the pain and difficulties of life or know that the world isn't theirs to control. People like this have always been the ones to lead the rest of us in true worship of God.

That's probably why Jesus said that it would be harder for a wealthy person to enter the kingdom of God than for a camel to get through the eye of a needle. It isn't that a wealthy person can't hear and respond to God's call to own up to our need of Him. Abraham, patriarch of God's people, the Hebrews, was wealthy. It's just harder for the wealthy to surrender to God because of having so much more to surrender.

Mary seemed to know all of this, impoverished girl as she was, and it's reflected in the words she spoke to Elizabeth in the Bible lessons most Christians heard together as they worshiped today:

“My soul magnifies the Lord, and my spirit rejoices in God my Savior, for he has looked with favor on the lowliness of his servant. Surely, from now on all generations will call me blessed; for the Mighty One has done great things for me, and holy is his name. His mercy is for those who fear him from generation to generation. He has shown strength with his arm; he has scattered the proud in the thoughts of their hearts. He has brought down the powerful from their thrones, and lifted up the lowly; he has filled the hungry with good things, and sent the rich away empty. He has helped his servant Israel, in remembrance of his mercy, according to the promise he made to our ancestors, to Abraham and to his descendants forever.” (Luke 1:46-55)

I love Christmas Eve because, in a single event, God telescopes everything about Himself and everything He thinks and feels for us.

God isn't removed from us. He becomes one of us, a baby who soils His diapers.

God doesn't disdain stuff. He made it and wants to redeem His children and in fact, all creation.

God doesn't come to wow us, but to save us from our sin.

The child was laid in a stone feeding trough in a barn that was probably a cave. Later, wise men from the East would bring, among other things, myrrh, a spice used to anoint the dead. Jesus' very birth foretold His sacrificial death. It also hinted of something else that would happen in a cave: the resurrection of Jesus' flesh, the undeniable guarantee that all who turn from sin and follow this Savior, even if they die, they will rise again with Jesus and live with God forever.

Christmas tells us how much God loves us and how much those with faith in Christ have to look forward to, here and in eternity.

"I am so glad each Christmas Eve, the night of Jesus' birth. Then like the sun, the star shone forth, and angels sang on earth."

And the song will go on forever and ever, world without end. Amen!
Posted by Mark Daniels at 5:20 PM

We have the same candlelight closing and singing of "Silent Night" while reminding one another that Jesus sent us out to be the light of the world.

As I told people at our Christmas Eve service, it's the second-best holiday ever (after Easter, of course). Christmas is indeed profoundly moving, as are your grace-filled words. Thanks for sharing.

Jeff:
Thanks so much for your comments. Yes, Easter is of course, our greatest festival. But I love Christmas!