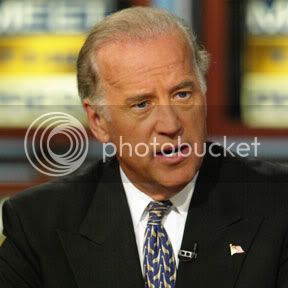 The *Daniels Fairness Patrol, an altogether non-partisan emphasis, must go into action again.

I mean, you got the first mainstream African-American who is articulate and bright and clean and a nice-looking guy.

Clean! So, then, Biden's campaign is over, right?

Imagine if Rush had called Obama the "first...clean African American."

Liberal Kos of the DailyKos agrees with Althouse and Hewitt, writing of Biden:

It's clear his career has dragged on one election cycle too many.

But let's get out of the spin cycle for a moment.

This is what Biden told WaPo regarding Obama:

My guess is that in the NYObserver article, "clean" was a synonym for "fresh" for Biden.

He also lauded the fact that in 2008, there will be a credible female candidate and a credible African-American candidate for President.

Biden does tend to speak off the cuff, which, irrespective of his politics, is something that makes him refreshing to hear. His interview with CSpan, featured prominently on his web site is so refreshingly candid that it reminds you of the interviews given by those who've retired from politics. Freed from the oppression of handlers, ex-pols tend to reveal more of their true selves, making me lament the fact that while "in the game," they concealed a lot of their humanity. But there are obvious risks to being so transparent.

There's little doubt that Biden stepped into it and it is the kind of thing that could prove fatal to his campaign. But I don't think that Joe Biden, who involved himself in the push for civil rights back in his 20s, is a racist.

[THANKS TO: RealClearPolitics for linking to this post.]
Posted by Mark Daniels at 11:49 AM

I agree. Seems like a number of people are taking cheap shots. When every word a politician says is scrutinized for double-meanings, it makes all of them less inclined to say what they think. A working Democracy needs dialogue.

Does not sound like Biden was racist when he said Oboma was attractive. Sound like he wanted a date. In america the only straight man that finds another man attractive is a white man sucking up to a black man. If Obama is nominated we will have a year of the republican saying how handsome he is, desperatly trying to proove that he is a good white boy.I hope Obama wins because atleast he is a man