Should Clergypeople Be Elected to Public Office? 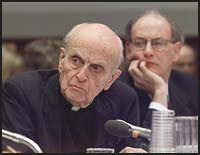 On the day when one ordained clergyperson announced he was forming a presidential exploratory committee, another who served in Congress for ten years passed away.

Former Arkansas governor Mike Huckabee, a Southern Baptist minister who once was president of his state's Baptist convention, is, as has long been speculated, looking at a run for the Republican presidential nomination.

Father Robert Drinan, a staunch liberal and ardent opponent of the war in Vietnam, resigned from Congress in 1981, at the end of his fifth term, "after the Vatican ruled that no priest could hold a legislative position." He died yesterday.

Through the years, I've known of several clergy-politicians, particularly during my brief tenure as a staffer of the Ohio House of Representatives. This may surprise some people. In fact, when people learn of my background in politics--I also ran a congressional campaign more than three decades ago--the typical comment is, "Wow! You really had a conversion experience!"

But clergypeople and politicians, at least the good ones, are often motivated by similar desires to improve the human condition and to serve others.

There's also probably an element of ego in the motives of both pastors and pols, a desire to be in the spotlight, evident even in those who feel called by God to their professions. This side of the grave, we will never wash sin out of our lives, however altruistic and commendable our actions may be.

But is the election of an ordained clergyperson an inherent risk? I hope not. I myself ran for the Ohio House of Representatives three years ago, finishing fourth in a five-way primary race. While I now feel that run may have been a mistake, I see nothing intrinscially wrong with it.

From a Christian perspective, a pastor differs from other members of the Church only in function. Pastors are called to a ministry that my own Lutheran tradition calls "Word and Sacrament." Such ministry doesn't always happen in a congregational setting. There are pastors serving as administrators of social service agencies, as college professors and presidents, and in other such church-related roles and nobody questions their continuing faithfulness to their callings.

The word pastor means shepherd. In a sense, all pastors are called to fulfill the same ministry Jesus gave to the apostle Peter. In the last resurrection appearance recorded in the New Testament gospels, Jesus told Peter to, "Feed my lambs...," "Tend my sheep...," Feed my sheep..." (John 21) The pastor is called to be a servant leader who helps the sheep--the human race--to experience the grace and new life Christ wants all people to experience.

Churches have proven quite expansive in defining what's involved in pastoral ministry. The late Fred Rogers, for example, had already long been the host of his daytime children's show, MisterRogers' Neighborhood, when he attended seminary. He was ordained in the Presbyterian church, with a call to television ministry to children. While Rogers never preached Christ on PBS, the grace of Christ certainly came through his work.

As I see it, there is one big danger, again from a Christian perspective, in clergypersons getting involved in politics. It's the danger of seeming to say, "Thus saith the Lord..." about one's own individual political views. God isn't a Republican or a Democrat and separation of Church and State is good for both. A pastor involved in politics risks subordinating the Good News--that God so loved the world that He gave His only Son so that all who believe in Him will live with God forever--to particular isms. This no doubt is why the Vatican told clergy to get out of politics in 1980.

What about from the vantage point of society? Is our country threatened when clergypersons enter politics? As I said earlier, pastors differ from laypersons only in function. All Christians share in what's called "the priesthood of all believers." Peter wrote about this priesthood in the New Testament:

But you are a chosen race, a royal priesthood, a holy nation, God’s own people, in order that you may proclaim the mighty acts of him who called you out of darkness into his marvelous light. (First Peter 2:9)

Christian laypeople are under no less obligation to live the Christian ethos of love for God and neighbor, to tell others about Christ, and to pray for others than are their pastors. That being the case, it's fair to point out that the lion's share of US presidents confessed faith in Jesus Christ. The funeral of Gerald Ford and the eulogy for him delivered by his successor, Jimmy Carter, have recently reminded us that for some of our Presidents, faith in Jesus Christ has been central to their lives. Yet their faith didn't threaten the Republic.

Some of our Christian Presidents have been Christian in name or membership only, no doubt. Some clergy who've been elected to public office have probably been hypocrites too. After all, everybody is drawn from the same human stock, each of us corruptible and mortal. But I think we can say that just as the Republic isn't threatened by people of faith, whatever their faith, serving in public office, there's no inherent danger when clergypersons become public officials.

The problems happen when those in elected office attempt to force their own religious views on society at large. But then, that's not only incompatible with living in a democracy, it's incompatible with being a Christian. Coercion has no place in sharing Christ with others. Peter also writes:

Always be ready to make your defense to anyone who demands from you an accounting for the hope that is in you; yet do it with gentleness and reverence. (First Peter 3:15-16)

Only one ordained person has ever served as president, Ohioan James A. Garfield. His administration ended after he'd been in office 199-days when Garfield was gunned down by an assassin.

Civil service reform was a major goal of Garfield's. His successor, Chester Alan Arthur, wasn't expected to do anything about that. Arthur had been the collector at the Port of New York and while not personally corrupt, looked the other way while those who were stole from the federal treasury there. But Arthur, a pastor's son, decided that he wanted to institute Garfield's reforms, shocking his one-time allies and becoming one of our most courageous presidents. Faith very probably affected the agendas of both Garfield and Arthur once they were in the White House. That didn't turn out badly.

A few weeks ago, Ohio swore in a new governor. Democrat Ted Strickland, a former Congressman, is also an ordained clergyperson of the United Methodist church. While there are those who disagree with his politics, it's not because he's a pastor. By the way, at his recent Inaugural ceremony, Strickland himself gave the opening prayer.

[This has been cross-posted at RedBlueChristian.com.]

[THANKS TO: John Schroeder at Article6Blog for linking to this post.]

[UPDATE: Here is a remembrance of Father Drinan from one of his faculty colleagues.]
Posted by Mark Daniels at 8:07 AM

Well said, Mark. A great many people today feel threatened by Christians, and maybe especially by Christians in government. Clergy in positions of power would be even more threatening to those who fear that religious conservatives want to create a theocracy. All Christians in positions of authority need to be careful not to do or say things that may smear the good name of Christ, and somehow we need to calm those fears. It's a difficult balancing act, isn't it?

Yes it is a difficult balancing act.

Look at Deborah's comment on this, as cross-posted at RedBlueChristian.com.