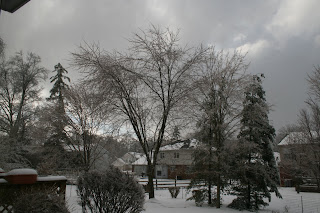 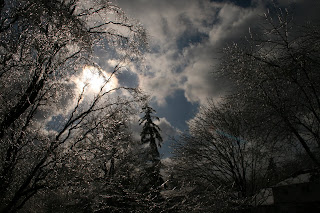 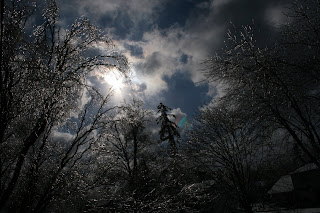 Two weeks ago, on February 6, we got hit with a fairly heavy snowstorm here in the Cincinnati area. One week later, freezing rain along with more snow arrived.

The second storm left behind it scenes of terrible beauty. Beauty, because, as my wife put it, the treetops looked as though they had been dipped in silver. But terrible in that the burdened trees and electric lines gave way in many area communities. Branches and whole trees fell onto power lines, meaning that about 100,000 homes in our area were without electricity, some for as little as an hour-and-a-half and others for several days. (Places north of us, like Columbus, were hit with more snow than ice.)

The ice also took the life of a little girl in our community. While playing outside on a snow day, a large branch fell and killed her.

But if you were able to safely observe the scenes left behind by the recent storms, there were some incredible sights. These are some of the pictures taken by my son, Philip, here in our neighborhood just last week.

[By the way, another Cincinnati area pastor has some interesting reflections inspired by our ice storm here.]
Posted by Mark Daniels at 4:27 PM

Mark, Enjoyed meeting you at Hope for Cinci last week -- thanks for putting a comment up over on the Eagle and Child -- I gave you a mention in my post today (monday feb 19).
russell