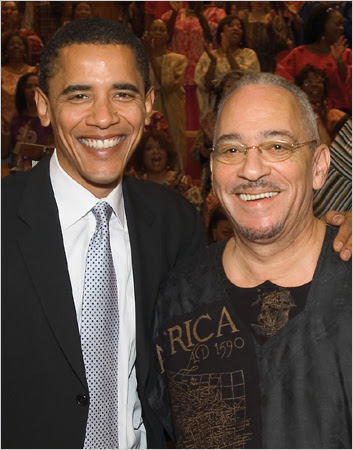 I've withheld expressing any opinion on the pronouncements of Jeremiah Wright, former pastor of Trinity United Church of Christ in Chicago and Barack Obama's former pastor. One reason for this is that my schedule has been so busy lately that it wasn't until a few days ago that I'd had the chance to look at the videos everyone has been talking about.

In fact, I hadn't even looked up Wright's sermon excerpts until after I listened to Senator Obama's speech on race while working on some thank you notes the other night. So, to some extent, I've experienced this controversy in reverse order: first, Obama's call for racial conversation, then, Wright's incendiary sermons.

Earlier this evening, CNN gave heavy coverage to articles by Wright and by a Hamas functionary which appeared last year in Trinity's bulletin. Some of the comments were antisemitic. Others were anti-Israel and some anti-Italian, replete with racial and ethnic slurs. Let me hasten to say that talk like this has no place in Christian discourse. In the most famous passage in the New Testament, Jesus told Nicodemus that God so "love the world," that's everybody. (The universality of God's love does not mean that God accepts all human behaviors. God calls us to repent for our sin, to turn from it. If we want to hold onto our sin, with no intention of turning from it and embracing dependence on Christ alone, we cannot enter Christ's kingdom. See here.)

Furthermore, I've never understood how Christians could be antisemitic. The Savior we follow, Who we believe was both God and human, was Jewish. The Jewish people were the womb and cradle of our Lord. The first Christians were all Jews.

In the past, a disturbing lie developed among Christians, one embodied in certain Roman Catholic liturgies and in the antisemitic rhetoric of the founder of the Lutheran movement of which I am a part, Martin Luther, blaming Jews for the crucifixion of Jesus.* But anyone who looks at the New Testament accounts of Jesus' execution and the early Church's reflections on this event will conclude that the entire known world of Jesus' day--Jewish, through its leaders, and Gentile, through the Roman Empire--repudiated Jesus and called for His death. We all are responsible for Jesus' crucifixion. We all are culpable. The sins of us all are the reason that Jesus died. This point is well-underscored in the words of the hymn, Ah, Holy Jesus, which our congregation sang one week ago, on Good Friday:

Who was the guilty? Who brought this upon Thee?
Alas, my treason, Jesus, hath undone Thee.
’Twas I, Lord, Jesus, I it was denied Thee!
I crucified Thee.

Wright's comments are bound to cause Senator Obama further grief as he tries to nail down the Democratic nomination for president, both distancing himself from Wright's sentiments and embracing him as his spiritual "uncle." There are important questions to be considered when it comes to Obama's twenty year association with Wright. After so long an association with Wright, it will become increasingly difficult for people to believe that Obama was unaware of the seeming depths of Wright's prejudices.

But I will lay the political questions aside. To me, the far more important questions raised by the Wright debacle are spiritual, particularly the effect the former pastor's incendiary rhetoric has had on the public's perceptions of Christian faith and whether his sentiments represent Christianity.

In an intriguing column, Martin Marty, a grey eminence of my own Lutheran movement, talks about his long association with Jeremiah Wright. Wright was a student of Marty's at the University of Chicago. He describes a warm association that included frequent visits to Trinity, where he and his wife, both white, were welcomed lovingly. He describes sermons in which he heard the Gospel of Jesus Christ--what Christians scholars call "the kerygma": the good news that God so loved humanity that God the Son entered our world, submitted to universal condemnation by the human race, died on a cross, and rose from the dead to give life to all who turn from sin (repent) and trust in Christ as Lord.

This kerygma has animated the Church's ministry for two-thousand years. It's a message that assures all people that we can be reconciled with God, enjoying relationship with God and others today and in eternity. All are sinners in need of a Savior; Christ is a Savior for all people. The apostle Paul puts it this way in the New Testament book of Romans:

For I am not ashamed of the gospel; it is the power of God for salvation to everyone who has faith, to the Jew first and also to the Greek. For in it the righteousness of God is revealed through faith for faith; as it is written, “The one who is righteous will live by faith.” (Romans 1:16-17)*

This proclamation, says Marty, was central to every sermon he ever heard Jeremiah Wright deliver.**

That's an important statement, especially coming from a Lutheran. If you're at all familiar with the Lutheran theological tradition, you know it began with theological concerns, concerns that the Word of God as seen on the pages of the Bible, was being shunted aside or not given its proper place as--in phrasing most Lutherans know or have heard a million times--"the authoritative source and norm of our life, faith, and practice." One of our confessions affirms that the Church can be identified as the Church solely because in it, the Gospel is rightly proclaimed and the Sacraments are rightly administered (Article 7, The Augsburg Confession). Lutherans have always been sticklers for the belief that when anyone dares approach a pulpit when God's people assemble for worship, the Gospel--the Good News--and the Word of God must be proclaimed. According to Martin Marty, he heard Jeremiah Wright adhere to that injunction whenever he preached at Trinity United Church of Christ. That is something to be considered as we delve into Jeremiah Wright's disturbing statements.

But there seem to have been other messages being sent by Jeremiah Wright and Trinity over the past thirty years. What were those messages? Were they at variance with Christian teachings and belief? I hope to look at these and other questions over the next several days.

*I was a voting member at the Churchwide Assembly of the Evangelical Lutheran Church in America (ELCA) when we repudiated the antisemitic writings of Martin Luther and apologized to the Jewish community for them. Luther's antisemitic writings were never part of the confessional documents of the Lutheran movement, although his antisemitism both reflected sentiments extant in Germany in the 16th.-century and later and may have provided philosphical undergirding to the tragedy of the Third Reich.

**Marty also repudiated Wright's close association and commendation of Louis Farrakhan and his belief in the notion that the US government created the AIDS virus to infect African-Americans. He also reserves the right to more harshly adjudge Wright with the development of more information.

***The quote is from the Old Testament, Habakkuk 2:4. The idea is that we are called righteous, right with God, not because of our moral rectitude or our membership of a particular ethnic group, but solely because we repudiate our sin and trust in the God revealed first to Israel and, we Christians believe, ultimately in Jesus of Nazareth.

While it is true that he "propagated" an editorial by a pro-Palestinian/anti-Israeli writer, the entire context of this blog post seems to be as if Wright has made comments of his own. As far as we know, he hasn't.

I was wondering why none of the anti-Semitic comments that Wright made were being reported, and this is presumably why.

Pyronite:
Thanks for dropping by. If you go here: http://www.reuters.com/article/politicsNews/idUSN2738625820080327, you'll see that Wright did write some of the incendiary stuff being talked about on Thursday.

Thanks again and God bless!

I have a lot of problems squaring the proclamation of the gospel with the preaching of bitterness, mistrust, falsehood, and racism. I will look forward to your as-always wise and gracious insights.

I'm not a fan of Wright, but the journalist in me has some issues. One, I can't find this issue of the magazine anywhere. All I could find was a 2006 issue. The website looks as if it has been taken down.

I guess, what I am trying to find you is if these assertions are backed up with facts. What issue of the magazine was this from?

Again, I was trained as a journalist, so I always have flags up when something can't be substantiated.

The first (in June) was a letter which said that Israel was working on an "ethnic bomb" to kill blacks and Arabs.

The second (in July) was a reprint of a Hamas piece denying Israel's right to exist.

CNS mentioned the ethnic slurs in Wright's Easter message based on reporting in the church's magazine.

*I was a voting member at the Churchwide Assembly of the Evangelical Lutheran Church in America (ELCA) when we repudiated the antisemitic writings of Martin Luther and apologized to the Jewish community for them ...

What took so long?

And why not walk out of the church with the namesake of Martin Luther, who wrote as the last paragraph of "On the Jews and Their Lies"

So long an essay, dear sir and good friend, you have elicited from me with your booklet in which a Jew demonstrates his skill in a debate with an absent Christian. He would not, thank God, do this in my presence! My essay, I hope, will furnish a Christian (who in any case has no desire to become a Jew) with enough material not only to defend himself against the blind, venomous Jews, but also to become the foe of the Jews' malice, lying, and cursing, and to understand not only that their belief is false but that they are surely possessed by all devils. May Christ, our dear Lord, convert them mercifully and preserve us steadfastly and immovably in the knowledge of him, which is eternal life. Amen.

The point of course, is that this doublestandering makes one head swim.