John McCain and 'The Vision Thing' 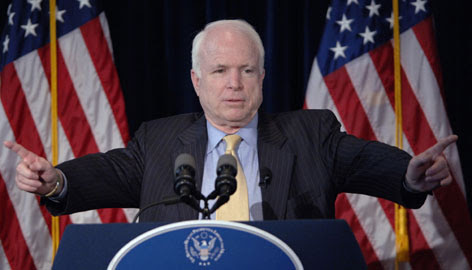 A politician lacking "vision" can be vulnerable.

When Senator Ted Kennedy could give no succinct description of where he intended to lead the country if he were elected president, his 1980 bid to wrest the Democratic nomination from incumbent President Jimmy Carter was doomed.

And George H.W. Bush, widely acknowledged as better prepared to be president than most previous chief executives was also seen as lacking in vision, even by his friends. As he prepared to run in 1988, hoping to become the first Vice President to be elected directly to the presidency since Martin Van Buren did it in 1836, Bush told a friend that when he was President, he would bring the very best people into the government. "That's great, George," the friend told Bush. "What will they do?" From the standpoint of many, that friend told Bush an uncomfortable truth. After being elected in 1988, the forty-first president was often excoriated for lacking a sense of where he wanted the country to go, eliciting complaints from Bush over obsessions with "the vision thing," which he disdained.

On Thursday, Senator John McCain, the presumptive Republican nominee, spent some time revealing his preferred future for the United States. In a speech at the Columbus Convention Center, McCain took his audience to the 2013, the end of the upcoming presidential term, and looked back on his Oval Office accomplishments. If McCain is half as prescient as he claimed to be, we certainly are looking to a rosy future. Most US troops will be out of Iraq and the economy will be on the upswing, among other things.

McCain came under immediate criticism for the speech. On Friday's installment of WOSU television's Columbus on the Record, Ohio Public Radio's venerable Bill Cohen and Columbus Dispatch columnist Amy Fisher both made light of the senator's speech for being tall on dreams and short on roadmaps. Oliver Willis poked fun at the Arizona senator with his own wickedly funny vision of his personal 2013.

As someone who has been leading people for nearly twenty-five years, I have mixed feelings about vision. On the one hand, I deem it essential that leaders have a vision. On the other hand, I view vision as an aspect of leadership that's somewhat overrated. Some assign almost magical properties to vision. I wrote about this several years ago in the second installment of a series I wrote, called Leadership Lessons:

Leaders need to have a vision. But their visions must be kept in tension with other elements of the leaders' art...

Fundamentally, leaders earn the right to cast visions by a combination of factors, including enjoying the trust of those they lead and the circumstances of the organism they lead, whether it's a church, company, university, social service agency, or country. If leaders fail to attend to the task of gaining trust or ignore the circumstances of those they lead, their visions will move few and go nowhere fast.

The most frequently cited example of a dramatic presidential vision from recent decades is probably President John Kennedy's May 25, 1961, call for the United States to land a man on the Moon before the end of the decade. I've heard some claim that Kennedy had no idea whether we had the capacity to make good on his challenge or not. While the lunar landing was far from a "gimme" and it happened two years later than NASA officials were telling the President it could take place, Kennedy's bold vision was more than a pipe dream.

Already during the Eisenhower Administration, NASA had given three alternative visions for the future work of the agency: (1) Exploration of the Moon and the planets using unmanned space vehicles; (2) Focusing on "the practical applications" of space exploration; (3) Aiming toward a manned landing on the Moon.

Kennedy had this list in hand as he began his administration's mostly-disastrous opening months. His legislative program was stillborn and April brought two major disasters: the Bay of Pigs fiasco in which expatriates from Fidel Castro's Cuba, under the aegis of the US and Kennedy's Administration, were slaughtered and Yuri Gagarin's orbital flight in space. These two Cold War events laid the spirits of the country low, in ways difficult for those who didn't live during that era to imagine.

It was under these circumstances that Kennedy arranged to speak to a Joint Session of Congress. He wanted to deliver what he described as a "second State of the Union Address." And he wanted to lay down the vision of a Moon landing, enacting a plan that NASA already had prepared.

What I learn from Kennedy's space challenge, my study of History, and my own experience as a leader is that a vision must stretch people to imagine. It must incite work and sacrifice and hope. It must be beyond easy reach. But there must be some notion of the pathway.

In every way, Kennedy's challenge to the country to land a man on the Moon in the decade of the 60s, qualified as a vision. But, for now anyway, Senator McCain's Columbus speech was more in the vain of wishful thinking, embodying what most Americans would like to see between January, 2009 to January, 2013, with little sense of how McCain intends to get us there.

I once heard a pro football coach say, "If 'ifs, ands, and buts' were candy and nuts, we'd all have a merry Christmas." True. "A goal," the leadership gurus tell us, "is a dream with a deadline." Senator McCain set forth some interesting goals in his speech on Thursday. But for it to become a vision, he needs to give us some notion of how we will attain it.

We should expect nothing less from our president, whether that turns out to be Senator McCain or Senator Obama.