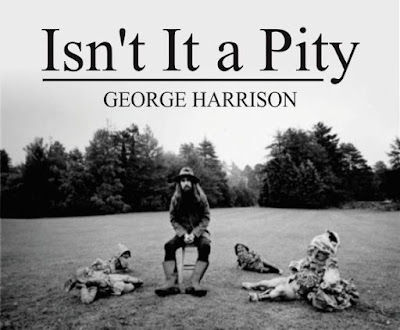 My wife and I watched the second part of Martin Scorcese's documentary about George Harrison, Living in the Material World, last night. It left me feeling sad and empty.

Not just because of the tragic last years of Harrison's life, which included cancer, remission, an attack by a would-be murderer that nearly killed him, and the re-appearance of the cancer that did kill him.

And not just because of the loss of a talented musician, still in his 50s, whose music helped comprise, as some have said, "the soundtrack of my life."

What saddened me was the source of Harrison's well-known spiritual quest. Harrison was more aware than most of us are of the basic human need to know God. But in the church of his upbringing (in this case, a Roman Catholic church), he didn't get to know God.

As a Christian, that saddens, chastens, and angers me. To know that there are people who, usually without being aware of it, come to our churches hungry for God, but never get fed is, to me unspeakably sad.

The great thing about the Church is that it's composed of human beings. Imperfect though each Christian is, she or he is empowered by God to let others know, see, and experience God.

Faith isn't something we attain through recited prayers and creeds, mantras, or beads, though any number of human practices can support us in our faith journeys.

But faith, actual knowledge of, friendship with, and trust in, God is a gift ordinary Christians can give when, by word and deed, they tell others about God-enfleshed, Jesus Christ. God's Holy Spirit works faith in the person who hears the Gospel, the good news about the new life that comes to all who trust what Christ has done for us through His death and resurrection.

Philipp Melancthon writes in Article V of The Augsburg Confession, a basic statement of faith for we Lutheran Christians:


...through the Word [about Christ] and administering the sacraments [Holy Baptism and Holy Communion], as through instruments, the Holy Spirit is given and the Holy Spirit produces faith, where and when it pleases God, in those who hear the Gospel. That is to say, it is not on account of our own merits but on account of Christ that justifies [makes right with Himself] those who believe that they are received into favor for Christ's sake... [italics added for emphasis]

In other words, there's nothing we can do to find God. And we don't have to perform any task to know God. We don't even have to do any work--like chanting a mantra--to know God. God makes Himself known in Jesus Christ.

Christ commissions the Church to let others know God through Himself.

The Holy Spirit takes the witness of ordinary Christians--dishwashers, plumbers, teachers, hairdressers, computer programmers, even preachers--and creates faith in those who hear the good news about Jesus.

Earlier I said, "The great thing about the Church is that it's composed of human beings."

Do you know what the horrible thing about the Church?

It's composed of human beings.

Knowledge of God, relationship with God, and trust in God are all free gifts God grants through Christ and spreads around through Christians operating in the power of His Holy Spirit.

But because sin still lives in Christians and will until the day we die, we Christians sometimes hide God's free gifts beneath the veils and thick brick walls of religiosity, pomposity, and authoritarianism.

That, I think, is what victimized George Harrison. It's why he never got to know Jesus Christ, the One Who makes God known. (One passage in Scripture, the witness of one who had known Jesus before His crucifixion and resurrection, says: "No one has ever seen God. It is God the only Son [Jesus Christ], Who is close to the Father's heart, Who has made Him known" [John 1:18].)

George Harrison grew up in a church that appeared to him so bent on maintaining its rites and its status that he couldn't see God.

The irony is that in his quest for God through Indian spirituality, he took up rites of religiosity to go looking for God.

Jesus is the One Whose coming into the world we celebrate during Advent and Christmas and Whose return one day to bring His eternal kingdom in its final form that we excitedly anticipate. Jesus is God revealed to all the world. "The Father and I are one," Jesus once said (John 10:30).

It saddens me to realize that churches around the world obscure the views others need to have of God. They bury Christ beneath the rubble of religion and in some cases, legalism ("You've got to do this or that to know God.") and in others, spiritual libertarianism ("Do whatever you want; God just wants you to be happy, no matter how monstrous you may act.").

But when Christians and churches allow themselves to simply and humbly tell others about Christ, serve in His Name, and share the Sacraments Christ instituted, one vulnerable human being in need of God to another, that's when people can see God, know God, and believe in God.

I'm sorry that, for whatever reason, whether because the church of his youth obscured the Gospel about Jesus from his view or because his ears, mind, heart, and will were closed, George Harrison never got to know Jesus.

Not some Life of Brian straw man version of Jesus, easy to dismiss or tear down.

Not the means for clergy or churches to exercise power over fearful or disbelieving people.

But the real Jesus, full of grace and truth. The One Who bore the burden of our sin, death, and futility on the cross. The One Who, by His resurrection, opened the gates of eternity for all who believe in Him.

George Harrison wanted to know God so much. I wish someone had shown him the God revealed definitively to the whole human race in Jesus Christ.

Isn't it a pity that someone didn't do that?

UPDATE, evening, 11/30/12: We didn't know last evening when we watched Scorcese's documentary about Harrison that it was the tenth anniversary of George Harrison's death.
Posted by Mark Daniels at 1:30 PM