Hello, Goodybe: Whatever Will I Wear?

As I've prepared to take on my new call as pastor of Saint Matthew Lutheran Church in Logan, Ohio, I've also been saying goodbye to the people of Friendship Lutheran Church, Amelia, Ohio. I've been the pastor of Friendship for seventeen years. Part of that process of transition has involved publishing old pictures on the Friendship news blog. Included are the three below, taken at Friendship's first worship service on May 19, 1991: 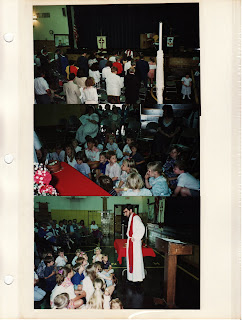 [Click on image to enlarge.]
As you can see, in these snapshots from my younger, thinner, and bearded days, I was wearing what has become standard attire for Lutheran clergy leading worship. Seeing them led one Friendship member to ask when, exactly, I stopped wearing this attire during worship at Friendship and whether I would resume doing so at Saint Matthew. The short answers to those two questions are: Early in Friendship's life and yes.

But the questions might warrant a lengthier examination, beginning with describing just what "standard attire for Lutheran clergy leading worship" is and what it's all about. Tomorrow, hopefully, I'll talk about why I stopped wearing this attire over the past seventeen years and why I'll take it back up again once I'm in Logan.

The bottom picture of the three seen above shows me in...
In seminary worship classes, we were taught the meaning of each of these pieces of clothing.

The alb is meant, broadly, to represent the purity of God. In ancient times, clergy went clothe-less beneath these garments, an apparent repudiation of their reliance on anything but God. They may also have had in mind Saint Paul's call for Christians to "put on the Lord Jesus Christ, and [to] make no provision for the flesh, to gratify its desires" (Romans 13:14). These ancient clergy also wore the alb shoeless. I don't know anyone who follows these precedents today. It wouldn't be such a hot idea. After all, we clergy have enough reputation problems these days; we don't need to add to them by going around in our altogethers under our albs!

The alb may also allude to the vision of believers in heaven given by the risen and ascended Jesus to John. John wrote down this vision in the book of Revelation. You can see that here. The problem with that symbolism is that all who have followed Jesus are in white in John's vision, not just those who've filled the pastoral or priestly roles.

The cincture, according to some sources has only a practical use: keeping flowing robes from tripping up clergy. But I seem to recall some more pious purpose attributed to it, though I can't recall what it was.

The stole, worn over the shoulders of clergy members, is supposed to refer to the special burden of leadership--to lead the church diligently--and alludes to Christ's words in Matthew 11:29-30:

"Take my yoke upon you, and learn from me; for I am gentle and humble in heart, and you will find rest for your souls. For my yoke is easy, and my burden is light.”

But, of course, this call is issued not just to clergy, but to all who believe in Jesus Christ.

Stoles are usually colored according to the season of the Church Year or, as in the case of the pictures of me above, according to the particular occasion. Friendship happened to begin its life on Pentecost Sunday, when the assigned color is red.

Stoles can be multicolored, though, and often, as is the case of the one pictured to the left, they're adorned with various symbols of the faith or with the season with which they're associated. The stoles I own were woven by a nun who was a fine artist, a participant in the Greater Columbus Arts Council's Artists in the Schools program, which my wife administered in the early-1980s.

Ask most clergy who wear clerical collars and they'll tell you that they symbolize their office. The shirts, they'll say, are signs of Christ and the Church having set them apart to fulfill a certain function.

And I'm sure that they've become that for many people. When clergy walk into a hospital room or a nursing home, the personnel in those places will generally know what the clergy person's function is and what they're doing there. (Although, in an age of terrorism and various predatory behaviors, it's always advisable for such facilities to require clergy to carry some form of identity or to register as a visitor as well.)

Years ago, I was angered by a pastor's wife who told me why her husband routinely wore his clergy collar. "Restaurants always let us get tables quickly when Bob wears his shirt," she told me, giggling. But this is the opposite of what the collar is meant to represent in today's Church. Clergy aren't supposed to be privileged characters, only Christians who fill a particular function.

The office of pastor is a calling and a privilege. But its function is to be a servant of the servants, someone who encourages and helps others in the Church to do all that God has called His people to do. If Jesus bent down to clean the filthy feet of His disciples, who am I to use Jesus and my office in His Church as a pretext for getting faster service at a restaurant? Jesus promises all believers that "the last will be first, and the first will be last" anyway. So, there's no need for pushing ahead. We're called to a different way of life!

The story behind the widespread adoption of the clerical collar as the uniform of pastors and priests is pretty humdrum. It was only after the fact of its use that the explanations mentioned above came to be used. When much of the Christian Church came to be centered in Rome, the Roman (Catholic) Church adopted the organizational scheme of the Roman Empire. Since the Bible never outlines a specific mode of organization, the bishop at Rome had to adopt some way of organizing and administering the far-flung church and adopting the system of an empire that had been so successful for so long made sense.

The uniform of the local bureaucrats for Rome's empire was the clerical collar. They were clerical workers. So, as the local administrators of Word and Sacrament, parish priests began wearing the same attire. When the Roman Empire died, the bureaucrats disappeared. But by that time, their uniform had been adopted by the priests.

This is one more example of how through the centuries, the Church has adopted and adapted customs and even holidays already extant in their cultures and "Christianized" them. Some people point to the recasting of the Roman holiday of Saturnalia as Christmas as though it somehow takes away from Christmas or the celebration of Christ's birth. No, it was a convenient leap from celebrating a holiday about light to remembering the light of the world who came into our lives in Jesus Christ.

Soon: Why I stopped wearing this attire at Friendship and why I will resume doing so at Saint Matthew.
Posted by Mark Daniels at 11:59 PM