[Most weeks, I try to publish at least one post dealing with the appointed Bible lessons for the upcoming Sunday. My hope is that I can at least help the people of the parish I serve as pastor, Saint Matthew Lutheran Church in Logan, Ohio, to prepare for worship. Others may find these explorations helpful because we use the same Bible lessons used by most other North American Christians each Sunday.]

The Prayer of the Day:
God of all peoples, your arms reach out to embrace all those who call upon you. Teach us as disciples of your Son to love the world with compassion and constancy, that your name may be known throughout the earth, through Jesus Christ, our Savior and Lord. Amen

General Comments:
1. All of the lessons deal with several common themes: (a) The God Who was first revealed to the descendants of Abraham and Sarah, the Jews, is the God of all people. (b) God desires relationships with people of all backgrounds. God wills to create and respond to faith in all peoples.

2. It's interesting to note that these themes are seen in both the Old Testament and the New Testament readings, that is, in Isaiah and the Psalm in the first case and in Romans and Matthew in the latter.

In the Old Testament lessons, the universality of God's dominion and God's command that foreigners be treated justly underscore this theme.

In the New Testament lesson, Paul's letter to the first-century church at Rome, composed largely of Gentiles, reminds the Christians there that God's grace toward them doesn't mean that God has taken grace away from the Jews.

The lesson from Matthew's Gospel, a document thought to be addressed primarily to Jewish Christians, emphasizes that from the beginning, though Jesus' earthly ministry was directed to "the lost sheep of the house of Israel," the grace of God was available to all with faith in the God revealed ultimately and definitively in Jesus.

General Comments on the Lesson from Matthew:
1. I'm going to preach on the Gospel lesson this week. My choice is to focus only on Matthew 15:21-28 and to forgo the optional 15:10-20. But because understanding a specific passage of Scripture is helped by considering the context in which it appears, I'll briefly touch on what happens in those preceding verses.

2. All of Matthew 15 deals with the question of "ritual purity." Who is pure in God's eyes? Who is impure, defiled?

The Pharisees weren't completely off-base in their concern with this issue. The Old Testament did enumerate lists of ritual laws meant to afford God's people the ability to express gratitude for all of God's blessings.

But for many in their camp, these laws weren't seen as the means of expressing gratitude, but the means by which they could say who was in with God and who wasn't.

For them, it was clear that the only people who were clean and part of the club were Jews who kept not only Old Testament laws, but also human traditions.

Lost in all of this was the role of faith. By faith in God's promises and not be the performance of the stipulations of ritual laws, Abraham had been declared righteous, right with God. By faith, centuries later, David had repented for his sins and trusted in God's mercy, knowing that God doesn't honor ritual observance devoid of trust.

3. Another great theme of both Matthew 14 and 15 is faith. In Matthew 14:31, Jesus chastises Peter, who began to sink after initially walking on the water, for being "of little faith." In this passage, a foreign woman is extolled by Jesus for having "great faith."

Verse-by-Verse Comments:
21Jesus left that place and went away to the district of Tyre and Sidon.
(1) Jesus is apparently getting away from the Pharisees whose strident opposition of Him is increasing. They may have been emboldened in going after Jesus after John the Baptist, someone else they found pesky, had been executed. 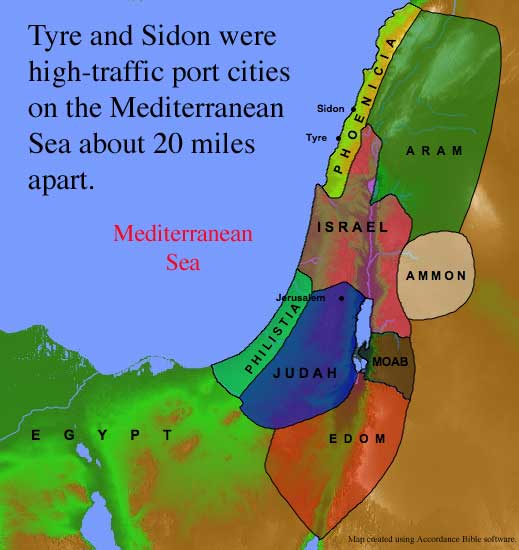 (2) This is one of only two times in the Gospels that Jesus is said to have traveled outside of His homeland. For more on Tyre and Sidon, go here. They're located north of Judea, where Jesus lived.

22Just then a Canaanite woman from that region came out and started shouting, “Have mercy on me, Lord, Son of David; my daughter is tormented by a demon.”
(1) In recounting this incident, Mark calls the woman, Syrophoenician, the designation used in Jesus' time. Matthew uses the more ancient term, Canaanite. The Canaanites were the enemies of God's people in ancient times. The Canaanites were, in the Old Testament, thought to be cursed and to be annihilated.

Being a foreigner--a Gentile--would have been one among those "outside" things that would have caused the Pharisees to dismiss this woman out of hand. She was ritually unpure, below both God and God's people. Matthew didn't call her a Canaanite by accident. He wanted to demonstrate that God's grace can reach anyone and that faith in God can be exhibited by anyone.

(2) The woman uses a loaded word herself. The designation, "Son of David" means that she understands Jesus to be Israel's long-promised Messiah, Christ. This is something that most who know of Jesus within His own country don't see or confess.

(3) The woman claims no special privileges. Nor does she claim to deserve what she asks of Jesus. "Have mercy on me!" she cries.

23But he did not answer her at all. And his disciples came and urged him, saying, “Send her away, for she keeps shouting after us.”
(1) Many are inclined to interpret Jesus' initial unresponsiveness to the woman as callousness. Others think that Jesus is testing the woman. But based on what happens subsequently, I think that if Jesus is testing anybody, it's the disciples. He's certainly going to teach them an important lesson momentarily.

(2) Brian Stoffregen points out that the word translated here as shouting is, in the original Greek of the New Testament, krazo. It means, basically, making an annoying noise. This woman is bugging the disciples. (I can't help but think of Bono on the live concert LP by U2, The Rattle and the Hum. He's singing the band's anti-apartheid song, Silver and Gold, when he says, "Am I bugging you? I don't mean to bug you.") Interestingly, this is the same word used in Matthew 14:26, where these same disciples cried out--annoyingly, maybe--in fear during the Galilean storm on seeing Jesus walking on the water. The difference, of course, is that the foreign woman cries out in faith, while they cried out in blind fear.

24He answered, “I was sent only to the lost sheep of the house of Israel.”
(1) N.T. Wright points out that this is Jesus' mission. He is the Messiah of Israel. His mission was to the lost sheep, the spiritually wandering defectors, of God's people. He will later commission His followers to expand that mission to Jerusalem, Judea, Samaria, and the world. But before the world can be called, the Messiah must do His ministry and call Israel to faith. Had Jesus embraced any other ministry, He would have been faithless and rendered God's Old Testament prophecies about the Messiah lies. Still, in the incident as it's about to unfold, Jesus always was open to foreigners with faith and in that openness, foreshadowed the international ministry of His Church.

25But she came and knelt before him, saying, “Lord, help me.”
(1) Once more, the woman isn't claiming to be a special case. She just needs help. Her confidence isn't in herself, but in the One from Whom she asks for help.

26He answered, “It is not fair to take the children’s food and throw it to the dogs.”
(1) Dogs was a derogatory term used of foreigners. But Jesus uses a word that might more appropriately be translated as puppy or pet. This hints at Jesus' intentions. He and the woman are now engaged in a playful dialog, making clear that Jesus will grant this woman's request.

27She said, “Yes, Lord, yet even the dogs eat the crumbs that fall from their masters’ table.”
(1) The woman agrees with Jesus. It isn't fair for the dogs to get the children's food. The Gospel belongs first and foremost, to the children of Israel. But, the woman says, playing along with Jesus' softened image of foreigners, "even the puppies get crumbs from the lord's dinner."

The woman acknowledges that she has no right to the main course. After all, she's no descendant of Abraham. She doesn't keep the ritual laws. She doesn't worship in synagogue or the Temple in Jerusalem. She's simply asking that a few morsels of God's abundant grace, undeserved as grace always is, will come to her daughter.

By now, the woman seems to understand that she and her daughter have become object lessons used by Jesus to convey something very important to His disciples.

28Then Jesus answered her, “Woman, great is your faith! Let it be done for you as you wish.” And her daughter was healed instantly.
(1) Jesus extols the woman's great faith. Stoffregen points out that this is the second time that Jesus has mentioned a person's great faith. As mentioned above, it contrasts to the little faith exhibited by the disciples in the boat in Matthew 14.

(2) Jesus didn't change His mission after this encounter. He continues to minister to the "lost sheep of the house of Israel." But we do see a preview of coming attractions in this incident. On the first Pentecost, fifty days after Jesus' resurrection, when the Holy Spirit gave birth to the Church, Peter alluded to several passages from the Old Testament when he said, "Everyone who calls on the Name of the Lord shall be saved" (Acts 2:21, see also Psalm 145:18). Jesus shows that to be true here.

[The map above comes from Bibletrack.org. The information regarding Tyre and Sidon is among the many wonderful resources you can find on the web site of Hosanna Lutheran Church of Houston, Texas.]
Posted by Mark Daniels at 1:01 PM