The girls wanted me to make a video so that they could show off their new Arena Baseball uniforms. 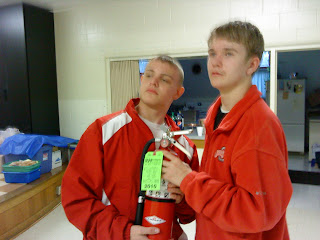 Stephen (r) and friend Isaac (l) designated themselves as the Fire Extinguishers for tonight's Arena Baseball game. After winning 14-7, they presented themselves with an appropriate trophy. What the far-off gazes are about, I have no idea. We had a smaller group than usual this evening. [Click on pictures to enlarge.] 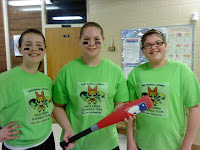 A still pic of the girls' in their new uniforms. 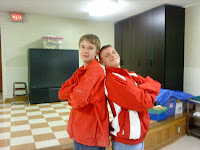 The boys striking a triumphant pose.
Posted by Mark Daniels at 9:11 PM