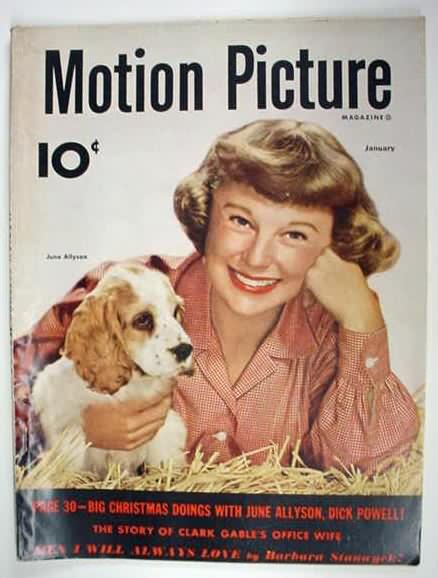 Except for an occasional involuntary drive-time scan-through, I hadn't listened to ESPN radio host Colin Cowherd since late January. But, while driving today, the ninety-three or so radio shows I listen to before I even consider listening to him were all either doing commercials or something else boring. So, being in a charitable mood, I turned Cowherd on.

Big mistake! I tuned in just in time to hear him complain that a network TV newscast spent three whole minutes profiling film star June Allyson, who died on Monday. Cowherd couldn't understand why so much time would be spent on somebody that neither he or his wife, both evidently fortysomethings, had ever heard of.

I'm fifty-two. When I was growing up, it was nigh-on impossible not to see June Allyson movies on television. (She also hosted a weekly anthology TV series.) But even granting the possibility that Cowherd either lived under a rock or missed all of Allyson's films when they were shown on the small screen during his growing-up years, I couldn't believe his insensitivity.

Believe it or not, Colin, not everyone is forty or below. There are millions of people who remember June Allyson's film performances. For many, including me, although I missed her prime as a film star, she was the embodiment of the American girl-next-door.

Although perhaps not a great actress, her performances in any number of memorable movies in the 1940s and 1950s reflect an important element of the American experience. In that sense, she was historically important.

That's probably insignificant to Colin Cowherd, though. Whether the persona he projects on his radio show is anything like the real person, I have no way of knowing. But in addition to being crass, boorish, sexist, materialistic, hedonistic, and shallow, the Cowherd-on-the-Radio persona also has a sense of history akin to that of the common housefly. Anything that happened before yesterday is deemed insignificant, to hear Cowherd tell it. (Or, as I used to hear him tell it, back when I was trying to give his show a fair shot.)

Although he seems to give lessons in anti-civics with great frequency, I don't expect Colin Cowherd to do a civics class on his radio show. But I would hope that the next time he ponders saying something about the passing of a cultural icon or about an American historical event and he really doesn't know what he's talking about, he would just clamp his jaw shut tight until he can think of something to say about the Boston Red Sox or the Tampa Bay Buccaneers.
Posted by Mark Daniels at 5:54 PM

Without reading the post I'm going to guess this is about his assinine opinion about the Pittsburgh Steelers winning the Super Bowl last season. Now to go see if I'm right....

Okay, I was way off. What you heard is way worse than what I heard. (What I heard was stupid and inflamatory, but at least not crass, boorish and insensitive.)

Oh how I miss Kornheiser....

Ice:
I do miss Kornheiser.