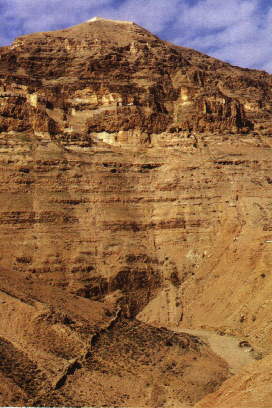 [To see the first pass and what these passes are all about, see here. Of necessity, these comments will have to be, quick, down, and dirty.]

Verse-by-Verse Comments:
1Jesus, full of the Holy Spirit, returned from the Jordan and was led by the Spirit in the wilderness,
(1) Jesus is here returning from His Baptism at the Jordan River. (See here and here.)

(2) As much as Luke emphasizes the importance of prayer in Jesus' ministry, he gives as much attention to the presence of the Holy Spirit in it. The Spirit leads Jesus into the wilderness.

(3) The wilderness, of course, was the place in which God's ancient people wandered for forty years after God freed them from slavery in Egypt and to the promised land. (A trip that should have taken eleven days.) This story is told in the book of Exodus.

2where for forty days he was tempted by the devil. He ate nothing at all during those days, and when they were over, he was famished.
(1) The words translated as tempted in this text are peirazo and ekpeirazo may, with equal warrant, be translated either as tempt or test. I'll give some consideration to this fact in my message, which I hope, will appear here tomorrow.

(2) The ancient Israelites (or Hebrews) were in the wilderness forty years and largely failed in being faithful to God. Only two of the generation who originally left Egypt survived the trip to the promised land. One of them was Joshua, Yeshua in the Hebrew, the same name given to that of the Savior of the world, Jesus (Yeshua). In the Old Testament story, God chose the man named Joshua to take over leadership from Moses on the latter's death. Having refused to rebel against God, the Old Testament Joshua led God's people into that promised land. Jesus leads all who turn from sin (repent) and entrust their lives to Him (believe in Him) into an eternal relationship with God.

(3) Tonight, during the Questions and Blessings portion of our Saturday GoDeep worship celebration, one person very sensibly asked if the devil knew that Jesus was God, why did he bother tempting Jesus. The Bible affirms that Jesus was true God and true man. He had to be human as well as God in order to become the human sacrifice for sin on the cross. Jesus' humanity represented His soft underbelly, if you will. His deity allowed Jesus to foresee with perfect clarity what would suffering He would undergo should He remain steadfast in His life mission of suffering and dying for us. His humanity wished to avoid this. The devil's temptations were designed to keep Jesus from fulfilling this mission. The devil wanted Jesus--and wants us--to take the easy path. So long as Jesus stayed away from His cross, the devil could continue to have some hope that his rebellion would hold fast and he could continue to be a sort of tinhorn deity. But Jesus ignored the devil's allurements, pressing on to Jerusalem and the cross.

3The devil said to him, “If you are the Son of God, command this stone to become a loaf of bread.”
(1) The word translated as if renders a word from the original Greek text, ei, which can mean either if or since. I agree with those scholars that the devil likely didn't contest Jesus' sonship here. He's not likely saying, "If you are the Son of God..." as though to taunt Jesus. Such a rendering overlooks what the Bible often tells us, that the devil is subtle. His stock in trade is to play up to our egos, telling us what he thinks that we might like to hear as a way of winning us over.

Instead, I think that the devil tells Jesus, "Since you are the Son of God, tell this stone to become food." The temptation here, of course, is for Jesus to use His capacity to countermand the usual laws of nature for selfish reasons rather than to create signs that point others to an awareness of Who He is.

(2) In the message, to be posted tomorrow, I'll mention to what in the Exodus experience this temptation relates.

4Jesus answered him, “It is written, ‘One does not live by bread alone.’”
(1) Jesus quotes words spoken by Moses in his farewell discourse to the people of Israel, in which he recalls lessons taught them during the wilderness wanderings.

5Then the devil led him up and showed him in an instant all the kingdoms of the world. 6And the devil said to him, “To you I will give their glory and all this authority; for it has been given over to me, and I give it to anyone I please. 7If you, then, will worship me, it will all be yours.”
(1) This temptation also relates to an Exodus experience and I'll mention that in my message.

(2) Notice that the devil is asking Jesus to violate the First Commandment: "You shall have no gods before Me."

8Jesus answered him, “It is written, ‘Worship the Lord your God, and serve only him.’”
(1) For the second time, Jesus responds to the devil's temptation by recalling God's Word. Paul says in the New Testament:

All scripture is inspired by God and is useful for teaching, for reproof, for correction, and for training in righteousness, so that everyone who belongs to God may be proficient, equipped for every good work. (Second Timothy 3:16-17)

9Then the devil took him to Jerusalem, and placed him on the pinnacle of the temple, saying to him, “If you are the Son of God, throw yourself down from here, 10for it is written, ‘He will command his angels concerning you, to protect you,’ 11and ‘On their hands they will bear you up, so that you will not dash your foot against a stone.’”
(1) The devil now uses Scripture to tempt Jesus. Don't be surprised by this. You can bet that the devil knows the Bible better than any of us do. But the one Jesus calls "the father of lies" always tells it with his own particular spin. The devil has perfected the craft of telling the truth in a lying way.

13When the devil had finished every test, he departed from him until an opportune time.
(1) I believe that the "opportune time" came when Jesus was on the cross and the taunting soldiers and one of the criminals between whom He was crucified challenged Jesus to quit His mission of dying for us: