Of Lennon, McCartney, Feuds, and Grudges

Rummaging through my old vinyl LPs tonight, I found this photograph, included as a stand-alone pic in the original 1971 release of John Lennon's Imagine album.

In spite of the supposedly irenic intentions of the title track, Lennon's posing with a pig is a less than kind slam at his former Beatle bandmate and co-composer Paul McCartney.

Such are the sorts of things that happen in the wake of messy divorces and the break-up of the Beatles was among the biggest messy divorces of all time. 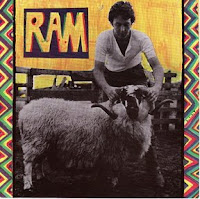 By 1971, Lennon was in the second year of his hipper-than-thou campaign, attempting to prove himself the avant garde rocker to Macca's bland Muzak Man. He did this most notably in the famed interview he gave to Rolling Stone's Jann Wenner. Oddly, he seemed to convince the Rock and Roll intelligentsia of the accuracy of his spin in spite of the body of Beatles work, which showed both McCartney and Lennon to be equal part rockers and balladeers.

Because the Rolling Stone interview was turned into a book which probably sold even more copies after Lennon's tragic murder, his assessment of McCartney became a sort of textus receptus for music critics and other Rock elites. McCartney-bashing went hand-in-hand with Lennon-eulogizing in spite of the fact that the two "divorcees" had reconciled long before that fateful day in December, 1980.

I've no doubt that it was, in part, because of the early post-Beatle spinning of Lennon, along with some of the regrettable bubble gum pop produced by McCartney in the mid-1980s, that the latter's entry into the Rock and Roll Hall of Fame as a solo artist was delayed. (McCartney finally was admitted into the hall in 1999, four years after he was first eligible.)

Feuds can produce headlines. They can cause others to line up to take sides. They even bring in revenue.

But, my reaction to the Beatles feuding and clash of egos is similar to that of U2's Bono. I once heard him say that a motivator for his bandmates and him to stay together is that they wonder what might have happened had the Fab Four stuck it out.

But, Lennon's death, so tragic and unexpected, which came before he and another Beatle, George Harrison, could reconcile, also serves as a pointed warning to us all to drop our grudges at the earliest opportunities. Tomorrow never knows, as Lennon famously sang; but more significantly, we can't know even if we have a tomorrow in this life. Better to reconcile than to live or die with regrets.

There's more than music or financial success at stake when any of us refuse to forgive others, though. Jesus Christ says that we can't count on God's forgiveness when we fail to forgive those who've done us wrong:

Of course, because we're all sinners, having the forgiveness God offers to those who turn from sin (repent) and entrust their lives to Christ (believe) is critically important. Unforgiven, we stand before God in our sins, unworthy for fellowship with God and for eternity with Him. Forgiven, covered with Christ, we're reconciled to God...forever.

Is there any grudge we hold so worth holding onto that we're willing to walk away from God and all His blessings?

When we consider just how totally God offers to forgive in Christ, it only makes sense to drop our grudges. I only pray that God will help me to always remember that! (See here.)

[Click the images above to see them enlarged.]
Posted by Mark Daniels at 11:29 PM

I'd never heard that about U2 or thought of them in that way. Any of them could have launched out on his own, but obviously they've chosen and managed to work together instead of apart. Good for them. Divorce almost always creates more problems than it solves.

And I never liked Lennon. His pride, pretension, and self-importance were so obvious they turned me off to ever considering his music. McCartney may not get the credit Lennon did for artistic genius, but he has consistently written enjoyable music.

You couldn't pay me to spend an evening hanging out with John Lennon. I'd gladly spend the same time with Paul McCartney.