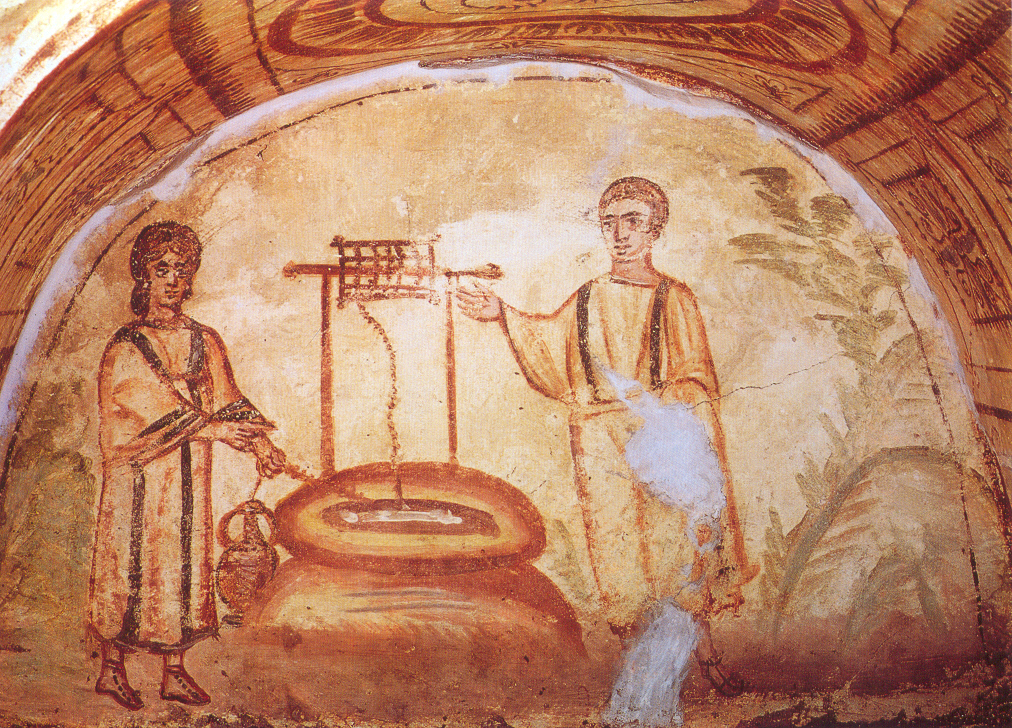 [You might want to look at the first two passes for this week. The first, here, also explains what the passes are about. Here is the second pass.]

Because the Gospel lesson for this coming Sunday, John 4:5-42, is so long, I'm not going to do verse-by-verse comments. Instead, a few general comments.

1. In 930 BC, the kingdom of Israel split into two nations. The south, with worship and civic life centered in Jerusalem, came to be called Judah or Judea. Jesus was raised in the hinterlands of Galilee, in the northern reaches of the southern kingdom.

The breakaway nation of Israel, with its worship and civic life centered on the city of Samaria, was the so-called northern kingdom. Israel, also called Samaria for its primary city, fell in 722 BC. (Judah was later conquered in 586 BC.)

But long after the northern kingdom was conquered, the enmity between the two peoples who had been part of God's people, the Judeans and the Samaritans, remained.

The Judeans, with some justification, regarded the Samaritans as faithless perverters of the faith. They looked down their noses on the Samaritans. Contact with Samaritans of any kind was something that Judeans avoided. This is why Jesus' conversation with the woman at the well in the Samaritan village of Sychar is so remarkable. It's the longest conversation of Jesus recorded in the Gospels.

For more on Samaria, see here.

2. Jesus, a Jew, speaking to a Samaritan, as happens in this narrative, isn't the only convention he flouts here. Men were also not supposed to speak to women in public. But Jesus not only speaks with this woman, He initiates the conversation.

3. Typically, scholars and preachers (including this preacher) have seen this woman as a person of loose morals, married five times and now living with another man without a marital commitment. The fact that she treks to the village well at the hottest part of the day also is suspicious, indirect evidence that her loose morals had earned her the shunning of the other women of the village, who would have gone to the well before or after the heat of the day.

But Fred Craddock, writing in his commentary on John, isn't so sure that this typical understanding of the Samaritan woman is right:

To be sure, Jesus knows she has been married five times and now "has" a man who is not her husband, but what are the particulars? Deaths? Divorces? Legal tangles? Or is it promiscuity? We do not know. All we know is that Jesus, as is his custom in [John's Gospel], reveals special knowledge of the individuals he encounters and alerts them that in meeting him they encounter the transcendent. Jesus does not urge the woman to repent or change her behavior.

So, we'll leave questions about the woman's virtue aside for now. This isn't of central importance to the text anyway.

4. My seminary mentor, the late Bruce Schein, writing in his commentary on John, saw a deeper significance to the woman's five husbands. It's based on the fact that the common Aramaic word for husband, baal and its plural, baalim, is the same name used of the false idols many in Samaria worshiped, either exclusively or with other deities. Hosea, a prophet from the northern kingdom, who lived in the seventh-century BC upbraided his fellow Samaritans for being faithless brides who, rather than keeping the First Commandment, had chased after other gods. Hosea had equated idolatry to adultery.

The talk of marriage and husbands, baalim, evokes thoughts of the prophet's language and naturally directs attention to the top of the mountain that overshadows them. There is the holy place which Judeans claim has been covered with temples to baalim borrowed from five pagan countries. Here the present worshipers do not truly acknowledge God as their only husband.

Understanding that Jesus isn't really talking about her husbands, but the idols which she and her fellow Samaritans venerate while still trying to be in relationship with God, makes sense of her next comment to Jesus: “Sir, I see that you are a prophet."

5. The theme of "living water" picks up on the Old Testament incident. Water is essential for life. And Jesus can be the source of water that, to those who receive, "will become...a spring of water gushing up to eternal life.”

6. I like what Craddock says in summarizing the significance of this encounter:

If any wish to be fascinated by this woman, let them be so [at what she does and says in verses 28 and 29]. She is a witness, but not a likely witness and not even a thorough witness. "A man told me all that I ever did" is not exactly a recitation of the Apostles' Creed. She is not even a convinced witness: "Can this be a the Christ?" is literally "This cannot be the Christ, can it?" Even so, her witness is enough: it is invitational (come and see), not judgmental; it is within the range permitted by her experience; it is honest with its own uncertainty; it is for everyone who will hear...

This woman, in fact, with her tentative recognition of Jesus, is a great model for all Christians to follow for sharing Jesus Christ. We don't have to have all the answers. (In fact, the person who claims to have all the answers is a terrible witness for Christ!) We just say, "This is what I personally know of Jesus. But come and see for yourself."
Posted by Mark Daniels at 2:45 PM