This guy, while also giving the reasons why Concepcion should not be a Hall of Famer, presents the most convincing arguments in Concepcion's favor that you'll find:


He was part of the best infield of all-time and one of the best Shortstops of all-time. The guy was money in the playoffs, batting a career .297, batting over .300 in 4 of his 9 series. Let’s look at his career numbers. 2326 hits (good enough for #130 on the all-time list). While that may not look so impressive, here’s some players he has more hits than: Jim Bottomley, Eddie Mathews, Bobby Wallace, Kirby Puckett, Kiki Culyer, Joe Cronin, Mike Schmidt, Willie Stargell, Joe DiMaggio and Willie McCovey. These aren’t cupcake, shrub-type names. These are ALL Hall-of-Famers, and some are recognizable household names. He has more hits than Joe DiMaggio, one of the most iconic figures in baseball history. When you compare him to similar players, www.baseball-reference.com lists Bobby Wallace, Pee Wee Reese & Luis Aparicio (all Hall-of-Famers), Alan Trammell (still on the ballot and should be a Hall-of-Famer), Edgar Renteria (a man who definitely has a case) & Tony Fernandez (one of the best Shortstops of his era).

9 All-Star Games. That is something only 92 people have ever achieved. He started 5. That’s one of 87. So who else has 9 appearances? Albert Pujols, Bobby Doerr, Don Drysdale, Joe Gordon, Jimmie Foxx, Bob Gibson & Goose Gossage. 5 starts? Roy Campanella, Lou Gehrig, Chipper Jones & Jackie freakin’ Robinson. (All those are Hall-of-Famers or sure future Hall-of-Famers.)

While it's not a no-brainer decision, I believe that Concepcion, who taught a generation of shortstops how to play their position on artificial turf and was certainly the best shortstop in the 1970s with the greatest National League team of all time, deserves to be in the Baseball Hall of Fame. 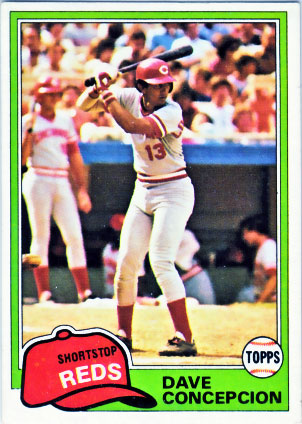 Thank you. I am humbled. I always grew up with the 75 Reds and believing they were the greatest team ever.

Justin:
Your post on Concepcion's case for being in the Hall of Fame was really great!

Thanks for stopping by here.

The '75 Reds were a truly great team. I bet you've read Joe Posnansky's book, 'The Machine.' It's very good.

By the way, if you're on Facebook, we have a group, 'Put Concepcion into Cooperstown': http://on.fb.me/gXZUNk.