Pic #2 from Our Recent NYC Trip 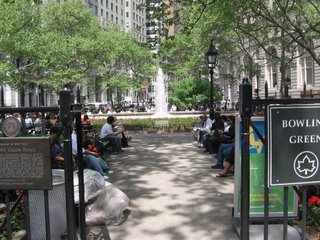 Bowling Green, the place where the remarkable Alexander Hamilton, seventeen years old and only in New York from Saint Croix for a short time, delivered a stirring speech advocating independence from Great Britain.

Hamilton, the hustling immigrant, has to qualify as central casting's idea of the prototypical New Yorker...and American.

This park was the site of a large statue of George III, which New Yorkers brought down, Baghdad/Saddam-style, once the Revolution began. They later melted the likeness down and made musket balls. The same thing was apparently done with the little balls that once adorned the tops of the wrought iron fence posts you see here.
Posted by Mark Daniels at 5:45 PM