Musings on Blair, Lame Duckdom, What Happens Next, and the Politics of Triangulation 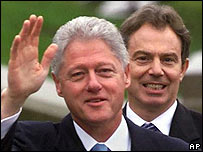 Blair's position within Labour had become increasingly tenuous. While his center-left politics of triangulation brought Labour an extended period of parliamentary majorities, many in his party thought that they came at the expense of party principles. Socialism often gave way to free market policies. And a more independent foreign policy gave way to one more closely tied to that of the US government. Labourite discontent evidently only grew with Blair's dogged support of the US war in Iraq and hius agreement with the Bush Adminstration on the recent war in Lebanon.

But I can't help mulling over several things...

(1) Doesn't Blair's announcement make him a lame duck? I hate term limits at any level of government in this country because it makes office holders lame ducks--and so, ineffectual--the moment they're re-elected for the final time. (I talk about that here, here, and here, by the way.)

And though I would be loathe to go to a parliamentary system--I like our Constitution's separation of powers and system of checks and balances, British PMs have historically enjoyed an ability not given to second term US Presidents because of the Twenty Second Amendment: The ability to exercise influence over the government so long as they retain the confidence of the people and of the legislative branch.

But Blair's announcement fritters that advantage away, no matter than he hasn't announced a departure date. He has become irrelevant and you can bet, the wrangling over the future of Labour has already begun. No new policy initiatives will be possible.

I wouldn't be surprised to see Blair step down within the week.

(2) What do you do if you're only fifty-three and after a ten year run at the zenith of your profession, you're put out to pasture?

Recent US Presidents, like Jimmy Carter and George H.W. Bush, have spoken of the profound hurt from which they had to recover after suffering repudiation from the electorate. Blair no doubt feels some of that, making it even more difficult for him to figure what he'll do next.

My guess is that after some time for healing, Blair will have opportunities on both sides of the Atlantic, particularly as it relates to one of his favorite causes, Africa. (Blair, a one-time rocker who apparently still practices the guitar each day, might even cut a record.)

(3) What gets forgotten because of the close relationship he's forged with George W. Bush is that Blair was probably even closer to Bill Clinton. In fact, Blair's "New Labour" was, in many ways, an adaptation of the "third way" triangulation that Clinton developed with the Democratic Leadership Council prior to his election in 1992. Blair drew counsel from Clinton operatives and welcomed the former President to speak to a Labour Party Conference a few years ago.

Over the long haul, triangulation can't be sustained, particularly when you're the member of a party whose philosophical moorings are emphatic in one direction or another. Eventually one's co-partisans become restive. The wars in Iraq and Lebanon finally proved Blair's undoing; he simply couldn't keep a major Labour faction quiet when they felt their principles were being violated.

And besides all that, there simply seems to be a feeling among other Labour MPs that Blair has had his day in the sun.

The Blair era is likely to end in days. It will be interesting to see what happens next in Britain...and in the life of Tony Blair.
Posted by Mark Daniels at 10:35 PM

Thanks for posting about the "lame-duck" syndrome that seems to affect presidents/prime ministers after their term has a limit set on it.
I guess I had not thought about that much, but it really makes sense.
Keep up the good posts!