Some Thoughts on Steve Irwin's Death 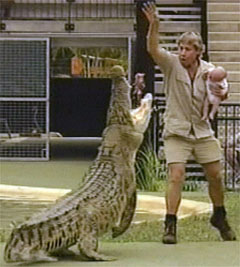 This morning, before going to breakfast in the Cleveland hotel at which we were staying, we flipped on the television to get the forecast for the day. Almost immediately, the image of Steve Irwin appeared on the screen, along with the news of his death.

Before this morning, my knowledge of Irwin was very limited. Channel surfing (and a friend of mine, who's fond of imitating Irwin) had taught me that he said, "Crikey" a lot, that he always wore shorts, and that he had once taken a foolhardy chance by feeding a crocodile while holding his small child. I also was aware that he had appeared in a movie a few years back. But that was about all I knew of him.

If you'd asked me last night, "Who is Steve Irwin?," I simply couldn't have told you.

So, the reaction to his death has taken me a bit off guard.

Once in the hotel dining area, I watched as dozens of people stopped what they were doing in order to gaze at the Plasma screen TV mounted above the line where they were loading up on eggs, bacon, and sausage, listening intently as Soledad O'Brien reported on Irwin's death.

Surfed-through newscasts seem to have been full of Irwin eulogies and retrospectives this evening. My daughter called tonight to ask if we'd heard the news. She also said that the cable channel on which Irwin's show had appeared was giving wall-to-wall coverage of his life.

Apparently, this fellow I'd known as only the Crikey Guy was a more significant presence in people's lives than I knew. I can't imagine that I'm alone in that.

My guess is too, that in this age of cable channels and web sites, there will be lots of celebrity TV hosts, recording artists, actors, and authors, people who will have significant international followings, but whose celebrity won't necessarily be widespread. Irwin was one whose celebrity had "crossed over" various demographic lines, making him at least somewhat recognizable to the general culture. Yet, he surely didn't enjoy the general recognition that once belonged to Marlon Perkins, owing to his Irwin-like Mutual of Omaha's Wild Kingdom TV show forty years ago.

Back then, there were only three TV networks (PBS, which existed in embryonic form, didn't really count as a full-fledged net then), there were no computers, and families generally sat in front of the television, watching the same shows and revering the same personalities together.

The long tail of today's internet world will confer star status on more people, who'll fill significant cultural roles, but there will be fewer megastars than we've had in the age of mass media. (There's a terrific article in the latest issue of Ode magazine on this subject, by the way.)

But of more immediate concern to me in all the eulogies that are being made for Steve Irwin is that impressionable young people will decide to pursue a life like his. From what little I know of Irwin, although he seems to have been an unfailingly nice man, he also appears to have been unnecessarily risky. How, for example, was the cause of conservation of which he was an ardent advocate advanced by dangling food before a crocodile while holding his month-old son? It's the sort of derring do that gets a crowd, to be sure. But what does something like that really accomplish?

The Jackass phenomenon, for example, has encouraged people to do all sorts of things to risk the wrath of animals. This has always struck me as exploitative of the animals who, after all, don't have the power to control their instincts or to think rationally that we human beings have. Why goad them into doing what they instinctively do to protect themselves and their own? It makes no sense to me.

Some risks are appropriate, of course. Life wouldn't be very interesting and the human race wouldn't advance very far if we all decided to quit taking reasonable chances. We can be thankful for people like Christopher Columbus, Martin Luther, the Wright Brothers, Charles Lindbergh, the astronauts, and so on. I only hope that the warm tributes being given to Irwin today don't cause young kids to take big, superfluous, and dangerous risks with their own lives.

I am with you as to personal knowledge of Steve Irwin. I would not have known his name in conversation nor would I have known him as the 'Crikey Guy'.

Your line, "So, the reaction to his death has taken me a bit off guard." fits my reaction perfectly.

I'm certainly hopful that he had a more personal knowledge of jesus Christ than I had of him.

Re: kids taking risks today I take it you have not hit the YouTube (or others) videos of kids on bikes and skateboards.

Evil Knievel and Steve Irwin have a lot of competition as far as foolhardy stunts go...

P.S. I meant to capitalize Jesus name in the previous comment. Sorry - I guess I did not press the shift key hard enough...

Perfect chance for you to walk in forgiveness!

This NYT essay says it well regarding youthful public admiration of Steve Irwin.

And, of course, people are particularly pained at the sudden death of someone so vibrant, appealing and youthful. I believe that was part of the mourning for Princess Diana, as well.

I have watched quite a few episodes of the Croc Hunter show, and I always had the impression he knew what he was doing and was very careful. Many jobs are dangerous.

Stingrays are not particularly dangerous animals, and swimming with stingrays is a common tourist attraction generally thought of as very safe. It's strange that after taking much more serious risks it would be a relatively unrisky endeavor that claimed his life.

It's interesting that particular article said the ray attacked him . . . most other accounts I've read said he was swimming over it when it startled and the stinger stabbed him in the heart. Either way, it was apparently the stab to the heart and not the poison of the sting itself that killed him. Not that that's particularly relevant; just interesting.

I don't know if the risks he took were in general excessive or not, but I do think he truly believed in what he was doing and had a big impact on the appreciation and publicity for wildlife and conservation.

Thanks to all for your comments!