Can't We Do Better Than This? 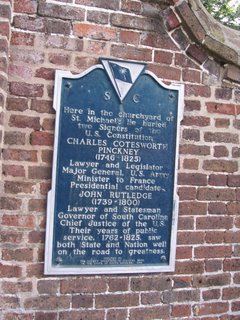 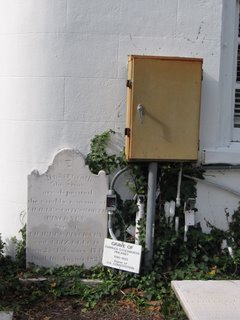 Several months ago, I reported on the relatively sad condition of the gravesite of one of the most important figures in US history, Alexander Hamilton. Hamilton is buried in the graveyard of Trinity Church in lower Manhattan, New York City.

During a recent trip to Charleston, South Carolina, I saw an even more shameful sight: The gravesite of Charles Cotesworth Pinckney, a signer of the US Constitution, in the graveyard of Saint Michael's Episcopal Church.

Saint Michael's seems like an active parish with a commitment to prayer and ministry. I was impressed with the small sampling I got of the congregation's life while I was there. I also was extremely impressed with the generally good condition of the building and grounds. The members are to be commended for doing such a great job and for being so inviting to their community and to visitors like me. They clearly seem to believe that a church isn't a building, it's people who follow Jesus Christ and I think that's awesome!

But I was disappointed by the electrical box dwarfing the marker on Pinckney's grave. Pinckney was important not only as a signer of the Constitution, but as a respected and important figure from our country's early history.

It may be too much to ask churches, with their frequent shortage of funds, to keep up the graves of important historical figures. Across the country, many townships and other localities often take over the management of graveyards when churches can no longer afford the upkeep. (We had a reverse situation in my former parish where, in addition to the large cemetery contiguous to our building facility and grounds, we managed manage a township cemetery. The township indicated they didn't have the resources to take care of it and long before my time in that community, asked our church to take on the responsibility.)

But maybe some modest federal appropriation could be set aside to make sure that the graves of our Founders and Framers and other important figures from our history don't fall into shameful decreptitude.

The United States was the first country to decide itself into being. Thirteen disparate colonies decided to declare their independence and later, as newly independent states, decided to form themselves into what they hoped would be an indissoluble union devoted to the twin principles of American nationhood: freedom and mutual responsibility (or community). Other nations have usually come about through an evolution rooted on language, culture, or religion. Many have come into being by force of arms.

But the United States is rooted in certain principles and ideas to which free people--at first only white men of property--gave their mutual consent. From the time of our founding, we've been in often painful process of becoming the nation the Founders and Framers, partly in spite of themselves, envisioned. (Also see here.)

Because there's nothing inherent about the continued existence of the United States, nothing intrinsic to us as one race, religion, or clan, an awareness of our History is essential. Every generation must know how this country was, building on Lincoln's evocative phrasing, brought forth, dedicated to certain principles which, unless respected and kept, will cause the country to devolve to chaos.

Sadly, it seems that much of what passes for civic education in our schools and universities--and especially in our families--these days, is as decrepit and untended as Pinckney's Charleston gravesite.

Too many take this country for granted, failing to recognize the uniqueness of America and how important it is that we keep remembering what this country is all about. If we don't remember America's past, we are bound to lose its future.

On the brick wall outside Saint Michael's graveyard, there's a plaque noting that within the burial sites of both Pinckney and John Rutledge, another signer of the Constitution, can be found. You see the plaque pictured above. I was glad to see it. But can't we do better in remembering our past?

Pinckney's second cousin, Charles Pinckney, was another signer of the Constitution. He isn't buried at Saint Michael's.

[THANKS TO: John Schroeder of Blogotional for linking to this post.]
Posted by Mark Daniels at 4:47 PM

I somehow missed your earlier post on Hamilton. Thank you for writing it and pointing to it here. I knew we were kindred spirits.

I remember reading Chernow's biography and thinking, "How did I miss this man in my education? Why is he ignored?" Hamilton was the exemplar American that Jefferson pretended to be.

But maybe some modest federal appropriation could be set aside to make sure that the graves of our Founders and Framers and other important figures from our history don't fall into shameful decreptitude.

Mark, I'm surprised. Wise and sober political observer that you are, you know this will never fly.

If Democrats get heartburn over federal dollars going to churches to help the urban poor, they sure as heck will never give money to a church to honor dead white guys.

But it's a nice thought.

Jeff:
You may be right that such a proposal would never fly. But the one thing that does give me hope on that score that the cooperation that sometimes happens between churches and local governments not for the spreading of the faith, but for the common good of the entire community.

But, as I say, you're probably right.