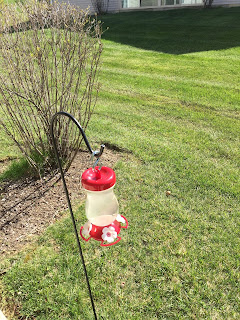 The new feeder is a top-fill, which I really like.

Don't know if there have been any patrons yet.
Posted by Mark Daniels at 4:09 PM No comments:

When I visited a member of the congregation at a local hospital on Wednesday, I saw a reasonably late-model minivan covered with stickers advocating all sorts of causes. 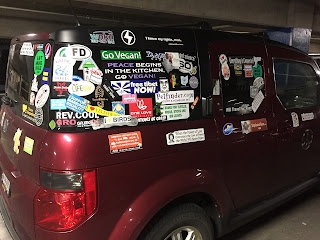 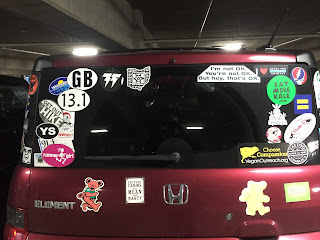 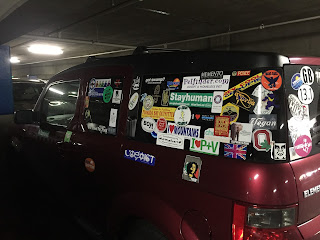 Posted by Mark Daniels at 4:01 PM No comments:

Tomorrow's Prayer of the Day

Tomorrow, we continue our series on Understanding Revelation. Here's the Prayer of the Day, which we'll pray together:


Almighty God, whether people know Your name or not, we all are each born with a yearning for the shelter of Your grace, mercy, and love. We thank You that in Christ, You have made Yourself known to us and, that by grace through faith in Christ, You shelter us from eternal imprisonment to sin and death. We pray that Your Holy Spirit will sustain us in saving faith in Christ, so that we may live with You for eternity. We pray that by the power of the same Spirit, You will help us to share Christ with others so that they too, can know Your shelter in their lives; through Jesus Christ, our Lord, who lives and reigns with you and the Holy Spirit, one God, now and forever. Amen.

Plan on worshiping at a church near you tomorrow.

Posted by Mark Daniels at 3:52 PM No comments:

Email ThisBlogThis!Share to TwitterShare to FacebookShare to Pinterest
Labels: Revelation 7:9-17

The Future is in Christ's Hands (Understanding Revelation, Part 2)

Last Sunday, we began a five-part series called Understanding Revelation. Near the end of last week's message, I told you, “We can trust in Jesus no matter what.”

Today, we’re going to look at what God revealed to John to assure him and us that we can trust Jesus, even though before this world ends and even though in the course of our own lives, many horrific things are bound to happen.

The universe undergoes cosmic convulsions of evil even as God’s people, the Church, go about our business of making disciples and being His kingdom and His priests, His ambassadors to a dying world offering the only way to life: the crucified and risen Jesus Christ.

God reveals this fact to John and through John, to us, so that we will never lose heart. In the end, God wins. And so do those who surrender their lives to Christ.

The first three chapters of Revelation recount the messages Jesus revealed to John for seven churches in Asia Minor, a place we know as Turkey today.

In the fourth chapter, the scene changes.

As he worships, John finds himself swept up into the heavenly throne room. There, God the Father sits on His throne, receiving the praises of four living creatures, who represent all of God’s creation praising and surrendering to God.

Angels and elders together, John saw, were praising God: “‘You are worthy, our Lord and God, to receive glory and honor and power, for you created all things, and by your will they were created and have their being” [Revelation 4:11].

Nobody and nothing besides this God, heaven is saying, is worthy of our surrender, our praise. That’s important to remember as we shift to Revelation 5, where today’s second lesson is found.

Take a look, please, starting at Revelation 5:1. John is the writer: “Then I saw in the right hand of him who sat on the throne a scroll with writing on both sides and sealed with seven seals. And I saw a mighty angel proclaiming in a loud voice, ‘Who is worthy to break the seals and open the scroll?’”

In ancient times, kings and other officials would seal important or secret documents with wax or clay into which they would press their signets.

The scroll held in God’s right hand contained information on seven evils that will befall (and, I should add, have befallen and are befalling) this world before the day when Jesus returns and fully establishes the new heaven and new earth, the place that will be inhabited by His Church, the people who turn from sin and persist in trusting in Him for life with God.

Listen: When we face problems in our lives, we often try to power our ways through.

Relationship issues? Our inclination is to either push to get our way or to give up.

Health or fitness? Our impulse is to rely on our willpower (which usually gives out) or to resign ourselves to whatever.

When we try to face life’s challenges or to unravel the meaning behind them with our own strength, or intellect, or willpower, we come up empty, no matter what the supposed self-made or self-made women of the world claim.

But you and I don’t have to go it alone in dealing with the challenges of life. God is more than able and willing to help us every step of the way!

Who, the mighty angel asks, is worthy of breaking the seals on the scroll? Take a look at what comes next, starting at verse 3: “But no one in heaven or on earth or under the earth could open the scroll or even look inside it. I wept and wept because no one was found who was worthy to open the scroll or look inside. Then one of the elders said to me, ‘Do not weep! See, the Lion of the tribe of Judah, the Root of David, has triumphed. He is able to open the scroll and its seven seals.’”

The “Lion of Judah, the Root of David” is the one Who, in earthly terms, became David’s descendant, born in David’s city of Bethlehem, Whose earthly parents were descendants of David, Mary and Joseph. It was from this family tree that the Old Testament said that the Messiah, the Savior of the world, would come.

In Isaiah 11:1 and 10, written nearly eight-hundred years before the birth of Jesus, we’re told that a descendant of David’s father Jesse would be the world’s saving king:


Because Jesus has triumphed, one of the elders tells John, he can stop his weeping, and Jesus can open the seals. Jesus is the only One Who can open up the future to us.

Next comes a few verses with strange imagery. (As if what we've already read isn't strange, right?) Verse 6: “Then I saw a Lamb, looking as if it had been slain, standing at the center of the throne, encircled by the four living creatures and the elders.”

You’ve got to keep your mind nimble here!

A slain Lamb doesn’t, on the face of it, seem like one who has triumphed. The world might call Him a loser. (A term we seem to be hearing thrown around a lot this year.)

But the Lion of Judah is also the Lamb. The Lion is the King of the jungle. A Lamb is weak and submissive. This is the paradox of Jesus that drives the world crazy when it comes to receiving Jesus.

How can the Lamb who was slain help anyone?

By bearing our sin for us on the cross.

By having the strength to bear the punishment we deserved and He didn’t.

“Look,” John the Baptist said of Jesus when he saw Jesus near the banks of the Jordan, “the Lamb of God, who takes away the sin of the world.” [John 1:29]

In the end, it’s only the Lion Who is the Lamb Who can help us!

Read on, please: “The Lamb had seven horns and seven eyes, which are the seven spirits of God sent out into all the earth.” All we need to know here is that seven is the number of completeness. There is nothing that needs added to or taken away from Jesus for Him to be all that He is. He is perfect. He’s worthy of our worship.

Read again, starting at verse 7: "He went and took the scroll from the right hand of him who sat on the throne. And when he had taken it, the four living creatures and the twenty-four elders fell down before the Lamb. Each one had a harp [I really wish they had guitars instead!] and they were holding golden bowls full of incense, which are the prayers of God’s people [Now you know why our Roman Catholic friends use incense in worship, symbolizing their worship and prayers ascending to God in heaven.]. And they sang a new song, saying: ‘You are worthy to take the scroll and to open its seals, because you were slain, and with your blood you purchased for God persons from every tribe and language and people and nation. You have made them to be a kingdom and priests to serve our God, and they will reign on the earth.’”

The worship and praise Jesus receives in God’s heavenly throne room looks a lot like the praises given earlier to God the Father.

That’s because Jesus is God.

When we trust in Jesus, we have direct access to God. We don’t need sigils, horoscopes, or Ouija boards. Through Jesus, we know that we don't need to do good works to get God's attention.*  All we must do is turn to Him trustingly, repentantly!

Whatever the future holds--whatever is revealed in the seven scrolls that Jesus alone is worthy to break open--we who trust in Christ belong to God.

God’s Word to ancient Israel is true as well to those who make up His Church, people who believe in Christ: “I have engraved you on the palms of my hands” [Isaiah 49:16].

Even when we forget God, He never forgets us.

Even when we sin, He never forgets His love for us, and when we truly repent, He never fails to forgive us and restore our relationship with Him.

Even when we walk away from God, He tells us through Christ: “Return to Me, and I will return to you” [Zechariah 1:3].

Jesus is worthy to break the seals on the scroll because He died and rose for us. “You were slain,” the worshipers say, “and with your blood you purchased for God persons from every tribe and language and people and nation. You have made them to be a kingdom and priests to serve our God, and they will reign on the earth.”

Through His blood, Jesus has purchased us out of our slavery to sin and death and He has given us life. If He can do that--if He can set sinners free, if He can breathe new life into dead bones--then the Lamb of God can also give all who trust in Him the power to face whatever this life throws at us!

Do you trust in Him today? He can be trusted!

So, four take-aways from Revelation today.


Maybe you thought Revelation was just about some grim future we must endure. The truth is that it’s really about trusting in Jesus Christ here and now no matter what because we know that He’s already triumphed over evil and He truly is the Lord of the universe. Amen

[This was shared during worship with the people and friends of Living Water Lutheran Church, Centerville, Ohio, yesterday.]

*Of course, the person saved by God's grace (God's charity) through their faith in Jesus Christ will want to do good works--works of love for God and love for neighbor--out of gratitude for God's grace which saves us from sin and death. In fact, God has already prepared good works for the saved person to do in His name and power. Check out Ephesians 2:8-10.


Posted by Mark Daniels at 2:48 PM No comments: