Even through the storms, God speaks to us

A man walked into the church building during staff meeting this morning. I asked, "May I help you?" "Are you taking donations for disaster relief?" he wondered. I said that, in fact, we were forwarding offerings to our denomination's disaster relief efforts. He asked how to make out the check and did so on the spot.

Later on, a Living Water member currently shut in by recent surgery called and asked if I would drop by in the afternoon. She and her husband wanted to give me a check for disaster relief.

This warmed my heart.

One of the deepest and least acknowledged needs of human beings is the need we all have to give. We were made for community and to care for others. That's how God made us, though that, of course, is often obscured by our sin. But when situations like the recent damaging hurricanes arise, all of us--believers and unbelievers alike--find God whispering His call for us to fulfill our humanity and give for the good of others. God is still speaking to us, if we will only listen.

Posted by Mark Daniels at 12:38 AM No comments:

I was out and about on Tuesday, wearing my clerical collar, when a guy spied me from across the parking lot. "Hey!" he hollered. "Pray for the Buckeyes!" I told him it might be better just to tell the receivers to get open for J.T. Barrett's passes.

Posted by Mark Daniels at 12:32 AM No comments:

[This message was shared yesterday during worship with the people and friends of Living Water Lutheran Church in Centerville, Ohio.]

Matthew 18:1-20
One of the stories we often tell in our family revolves around an incident that happened when our kids were about ten and seven. We’d visited family in Columbus and stopped at Lane Avenue Shopping Center there before heading back to Cincinnati, where we lived at the time. We climbed into the car and were pulling out, when we heard a kind of whimpering yell. It was Philip, the oldest, who wasn’t yet in the car. We stopped and Phil jumped in.

Now, why exactly did we stop to get him?

I mean, we’d successfully collected 50% of our kids and, with Phil being ten years old, he was costing us a lot of money.

He wasn’t generating any income; so, he was a net drag on the family finances.

And besides, it was a hassle taking him to this event and that activity.

Phil hadn’t attained any great achievements, led any governments or armies, hadn’t made his first billion-dollars. He was nobody, really.

So, why did we bother bringing him back into the car?

We stopped because every member of a family, from the child awaiting birth in its mother’s womb to the infirm parent no longer able to take care of themselves, matters.

No matter how seemingly unimportant a family member may be in the eyes of the world, every one of them is important.

Many New Testament scholars believe that the gospel of Matthew is built around five major collections of sayings by Jesus. Some see these five sections corresponding to the first five books of the Old Testament, called the Pentateuch, also called the torah, a word roughly meaning, instruction on the way of life, the way of life with God.

That characterization, the way of life with God, certainly applies to the fourth section of Matthew’s gospel, which begins with the verses that make up today’s gospel lesson, Matthew 18:1-20.

In this section, Jesus talks about how the people in His family, His kingdom, His Church, are to behave toward one another.

The key to understanding this entire passage is to be found in the first five verses. Understand these five verses and the subsequent fifteen fall into place. So, today, we’re only going to address those five verses.

It all begins with the disciples asking Jesus a question: “Who, then, is the greatest in the kingdom of heaven?” (Matthew 18:1)

These kinds of questions are important to us in the world, mostly because we’d prefer being the ones calling the shots, preferably without any accountability, thank you very much. We like the idea of being the top dog.

At the first church I served as pastor, we had a five-week long summer school for kids in the third through eighth grades focusing on the Bible and Catechism. We had 85 students. For recess during the last week one year, I set up a kickball tournament. When I announced that we would play the tournament March Madness-style, only with the losing teams advancing, one boy, who would later play college football, asked, “How will we know which is the best team?” When I told him that we wouldn’t know, he offered a quietly disappointed, “Oh.”

So, these questions of who’s most important, who’s the best, who has the most, who’s on top, seem to be important to us from a young age.

When Jesus was asked who was most important in His kingdom, He could have said God or the patriarchs or Moses.

But Jesus wants His disciples, including you and me, to see where true greatness resides in His eternal kingdom. So, Jesus offers a tangible illustration. Verse 2: “He called a little child to him, and placed the child among them. And he said: ‘Truly I tell you, unless you change and become like little children, you will never enter the kingdom of heaven. Therefore, whoever takes the lowly position of this child is the greatest in the kingdom of heaven. And whoever welcomes one such child in my name welcomes me.’” 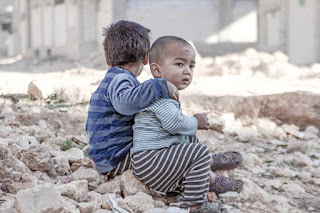 We mustn’t miss Jesus’ point here. Jesus is not saying that children are innocent, sweet, or trusting and that we should imitate them. As one scholar says, Jesus is not talking about children’s character traits. Like King David, writing in Psalm 51, we know that every child conceived by human parents is born in sin.

What Jesus is pointing to in this child is their status.

Children occupied the lowest rung of society. In many ways, it can be argued, they still do.

Jesus is saying that if we who claim to be His disciples want to be the greatest in His kingdom, we must be willing to accept the lowest place, to sit at the kids’ table, to be the servant of all His other servants.

And Jesus also says that true greatness in His kingdom is further exhibited by those who welcome the people nobody else will welcome, to offer them the love of God that others shy away from sharing with them.

Jesus’ kingdom isn’t like the kingdoms of the world.

In Jesus’ kingdom, the greatest are those who lift others up, not themselves.

In Jesus’ kingdom, the greatest are those who see that when they serve those regarded as lowly and unimportant by the world, they really serve Him.

And, this includes the lowly people sitting next to you in worship this morning!

In commending this way of life to us, Jesus isn’t asking us to live any differently than He Himself lived (and died and rose) when He was on the earth. A touchstone passage of Scripture for disciples is Philippians 2:5-11, where Paul echoes the words of Jesus we consider today. This passage, like Jesus’ words in today’s lesson, are meant for disciples of Jesus and take up the question of how you and I are supposed to treat each other as disciples. The passage is worthy of reading in its entirety together. So, read it aloud with me, please:


In your relationships with one another, have the same mindset as Christ Jesus: Who, being in very nature God, did not consider equality with God something to be used to his own advantage; rather, he made himself nothing by taking the very nature of a servant, being made in human likeness.And being found in appearance as a man, he humbled himself by becoming obedient to death—even death on a cross! Therefore God exalted him to the highest place and gave him the name that is above every name, that at the name of Jesus every knee should bow, in heaven and on earth and under the earth, and every tongue acknowledge that Jesus Christ is Lord, to the glory of God the Father.

Listen: As Jesus’ disciples, we can risk being one another’s servants, humbling ourselves before one another in order to build each other up, because we know that all who turn from sin and believe in the crucified and risen Jesus, are citizens of the kingdom of heaven for all eternity.

Every person who believes in Jesus already has an exalted place in the kingdom of heaven, so we don’t need to push ourselves forward.

If we persevere in following Jesus, even when it may be damaging to our reputations or livelihoods in this world, we live and die in the certainty that we are going to reign with Jesus over His new creation for all eternity.

2 Timothy 2:11-12 tells Christian disciples: “If we died with him, we will also live with him; if we endure, we will also reign with him. If we disown him, he will also disown us…”

We need to keep following Jesus in humility. And that means being humble not just toward Jesus, but also in our dealings with our fellow disciples!

Maybe the next time we run into each other before or after worship, or during our small groups or while helping at Upward, Tuesday tutoring, on a mission trip, or at Saint Vincent’s Gateway Men's Shelter, our first words to each other shouldn’t be, “How are you doing?” And it surely shouldn’t be, “Why do you keep messing up?” (Not the question of a disciple.) Maybe we should be asking each other, “What can I do for you today?”

The greatest in God’s kingdom are those who take the path of servanthood, walking right behind God in the flesh, Jesus, Who took the path of the cross and, for His faithful service to God and to the human race, was lifted up by His Father.

All who, as Jesus told us in last week’s gospel lesson, take up our crosses, owning our sins, and follow Him, trusting Him as our God and Savior, will also be lifted up to live with Him now and forever.

When you know you’re God’s child, you don’t have to play at being a big shot. In the eyes of God, you already are a big shot, especially when you humble yourself to serve others in Jesus’ name. Amen

Posted by Mark Daniels at 11:45 PM No comments: