Tonight's Weeknight Bible Study of the Gospel of Matthew, Chapter 10

Posted by Mark Daniels at 9:58 PM No comments:

Email ThisBlogThis!Share to TwitterShare to FacebookShare to Pinterest
Labels: Matthew 10, persecution, The Apostles, The Church

Tonight's Weeknight Bible Study of the Gospel of Matthew, Chapter 9

Tonight's Weeknight Bible Study of the Gospel of Matthew, Chapter 8

In case you can't tell, I'm wearing a ballcap and a mask. A doodle done while talking on the telephone. 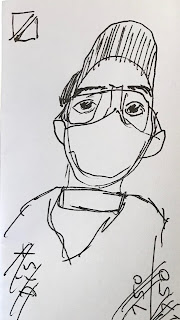 Buy me a book
Posted by Mark Daniels at 3:35 PM No comments:

Email ThisBlogThis!Share to TwitterShare to FacebookShare to Pinterest
Labels: Miscellany

History is important to me. My parents made a point of teaching history to me from the time I was a little boy. From them, I learned the meaning and the privilege of being an American.

At Ohio State, I graduated with a degree in Social Studies, which was composed mostly of the study of history. I’ve always felt that anyone who votes needs to study history in order to exercise the privilege responsibly. And I love visiting historical sites.

All of this means that I am following the current debate over whether confederate monuments and symbols should come down with deep interest.

There’s a difference between remembering history and memorializing it.

To remember is to be equipped for good citizenship.

To memorialize is to honor people and movements from the past.

There are people and movements it’s important to remember. But you would never take up public space to honor their memory.

Two years ago, my wife and I were in Germany. In Berlin, across the street from the US Embassy, close to the Brandenburg Gate, is a deeply moving Holocaust Memorial. It honors those victimized by Hitler’s Nazi movement. Germany also has Holocaust museums, as we do in America, and young people there are taught about the horrors of Germany’s fascist past. All of this is wise because, as President Kennedy said, “A knowledge of the past prepares us for the crisis of the present and the challenge of the future.”

The Germans believe that by remembering the worst of their nation’s past, they can work to avoid a repetition of its horrors.

But I’ve noticed something. In Germany, there is no Fort Adolf Hitler. There’s no Goebbels Air Base, no Himmlerstrasse, no memorials to Joseph Mengele or Albert Speer. And, with the exception of marginal kook groups in that country, the Nazi flag is only seen in museums.

Why? The Germans remember their past. But they do not honor the people who made hatred and murder into public policies. They don’t memorialize those who by their warped philosophy, brought death and suffering to millions, along with destruction and shame to their land. They don’t have monuments to those who denied that Jews, descendants of Abraham and Sarah, were made in the image of God.

There’s a lesson in this for we Americans.

The confederacy was the most grievous and consequential act of treason in American history. A group of US States initiated a war to break up the union and destroy constitutional government in defense of their desire to extend the evil of slavery into new American territory.

The confederacy was predicated on the belief that Blacks were inferior beings not made in the image of God.

In all of this, the confederacy denied the Christian faith it professed as well as the principles of America’s founding.

Even many in America’s founding generation, which had wrestled to form a union despite differences on slavery, recognized that slavery’s days were and ought to be numbered. (Thomas Jefferson was a notable exception.)

Washington recognized the unsustainability of slavery and its inconsistency with our founding principles. His will provided for the emancipation of his slaves on his wife’s death.

But the confederacy insisted that slavery, their “peculiar institution” with its plantations, more aptly described by someone as “slave labor camps,” needed to be extended into more of the United States.

That’s why the embryonic confederacy attacked United States soldiers at Fort Sumter, then unleashed the horrors of the Civil War on the country.

Remembering the confederacy should call us to a deeper patriotism, a deeper commitment to the twin principles of our founding: (a) liberty (b) guaranteed by our mutual commitment and accountability. It should call us to affirm our belief in the sanctity and value of every human life and the equality of all people.

We should remember Jefferson Davis, Robert E. Lee, Stonewall Jackson, and the other confederate traitors the way Germans remember Hitler, his sick ideology, and the horrors he unleashed on the world. But the confederacy and its battle flag deserve no honor. Traitors and haters don’t deserve to be memorialized.

[Memorial to the Murdered Jews of Europe in Berlin.] 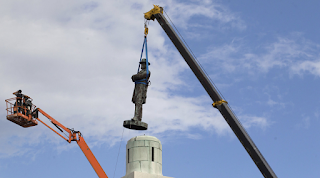 [New Orleans removed a large stature of Robert E. Lee from Lee Circle back in 2017. The photo, taken by the AP, is from NPR's story on the event.]

Buy me a Book
Posted by Mark Daniels at 2:38 PM No comments:

Tonight's Weeknight Bible Study of the Gospel of Matthew, Chapter 7

Posted by Mark Daniels at 10:07 PM No comments:

Email ThisBlogThis!Share to TwitterShare to FacebookShare to Pinterest
Labels: God's grace, grace, Grace Alone, hypocrisy, judging others, Kingdom of Heaven, Matthew 7, Prayer, The Church, the freedom of the Gospel

Tonight's Weeknight Study of the Gospel of Matthew, Chapter 6

Posted by Mark Daniels at 9:51 PM No comments:

Even When I'm Not Feeling It

These are reflections from my morning quiet time with God today.

In this passage, a widow from Zarephath speaks to Elijah the prophet. Sometime before, he had come to her at God’s direction, because the brook from which he’d been drinking water during the drought dried up. God had told Elijah that this widow would prepare a meal for him.

When Elijah approached her, the widow had only a small amount of flour and oil. Elijah assured her that this supply would never run out and that if she prepared cakes for him, she, her son, and Elijah himself would live.

That’s what happened for a long time. Then, one day, the widow’s son died. She was certain that, despite God’s provision, God had sent Elijah to remind her of her sin and to kill her son (1 Kings 17:18). Elijah then appealed to God and God brought the boy back to life. It’s at this moment that the widow affirmed her belief that Elijah was a man of God who spoke the Word of God.

Listen
It seems strange that only here does the widow make this affirmation. For three years, she acted on Elijah’s assurance that, because he was God’s prophet, “the handful of flour and..little oil in a jug” (1 Kings 17:12) would sustain the three of them. She’d acted as though she believed.

When there was just enough for her and her son to fix one final paltry meal, then die, she could have told Elijah to go packing. But she hadn’t done that. She fixed a cake for the prophet and found enough flour and oil to make one for her son and herself, too.

This had gone on for maybe three years (1 Kings 18:1). Everyday, the widow went to the same nearly empty bag of flour and nearly empty jug of oil and found enough to feed the three of them.

It appears that she acted on faith and had done so for some time.

Yet when her son dies, we see her doubts. She doubts Elijah’s office as God’s prophet, doubts her own worthiness of God’s forgiveness, and doubts, it seems, that God has had anything to do with the provision He’s made for her all this time.

It’s only after God answers Elijah’s prayers for her son to be given life again that she tells Elijah, “Now I know that you are a man of God, and that the word of the Lord in your mouth is truth.”

What I find remarkable and laudable about this woman is that she acts in faith even when she’s not feeling it.

The changed and changing lives of those we know who dare to follow Jesus also vindicate such faith.

That’s true even when, like the widow, I’m  not feeling it.

My call is to keep following the God I meet in Jesus no matter how I’m feeling. And I’m called to keep sharing Him in times of drought and surfeit, joy and sorrow, hope and despair.

No matter what, the God we meet in Jesus Christ is still God. I can trust in Him.

Response
Father, forgive my despair. Forgive me for taking You for granted or not thinking of You at all. Forgive too, my reliance on my feelings and thoughts rather than on Your truth. Christ is crucified, risen, and ascended even when I’m not feeling it, even when I can’t understand it. Help me today to trust in You. Help me to act on a faith already vindicated by my Savior Jesus. In His name I pray. Amen 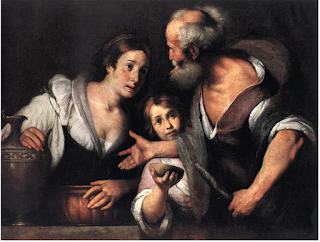 [The painting is by Bernardo Strozzi [1581-1644] and is called Prophet Elijah and the Widow of Sarepta.]
Posted by Mark Daniels at 12:51 PM No comments:

Email ThisBlogThis!Share to TwitterShare to FacebookShare to Pinterest
Labels: 1 Kings 17:24, Elijah, Faith versus my feelings, Faith versus my thoughts, the widow of Zarephath
Newer Posts Older Posts Home
Subscribe to: Posts (Atom)