Posted by Mark Daniels at 10:18 PM No comments:

Posted by Mark Daniels at 10:17 PM No comments:

[The video below is the worship service of the people and friends of Living Water Lutheran Church, Centerville, Ohio, yesterday morning. Below that, you'll see the transcript of the prepared sermon. Have a blessed week.]

Mark 7:14-23
In today’s Gospel lesson, Jesus says, “Nothing outside a person can defile them by going into them. Rather, it is what comes out of a person that defiles them.” (Mark 7:15)

These words would have been explosive to Jesus’ original hearers, undermining much of the false teaching they’d heard from their own religious leaders.

Jesus makes this statement after the confrontation with the Pharisees and Scribes we heard about in last Sunday’s Gospel lesson. There, the Pharisees and Scribes tried to chastise Jesus for allowing His disciples to eat with ritually unclean hands despite the “tradition of the elders.” After telling His accusers, “...you nullify the word of God by your tradition that you have handed down…” (Mark 7:13), Jesus, in today’s lesson, calls the crowd following His every move to come hear a statement that the Pharisees would have thought--and most people today were they to really think about it--would find deeply offensive.

The Pharisees and scribes of Jesus’ day thought that all human beings were born sinless and clean. They thought that if a pure, sinless human being sinned, it was because of something outside themselves, what they called “a mother of defilement,” tripped them into it.

This, of course, is the opposite of what the Bible teaches about we human beings.

In Genesis, God says that “every inclination of the human heart is evil from childhood…” (Genesis 8:21)

And King David was compelled to confess of himself, “Surely I was sinful at birth…” (Psalm 51:5)

The Bible teaches and our experience should show that we do not have to be taught to be sinners or how to sin; it’s our nature to sin.

But we do like to think of ourselves as pure and clean. That way, whenever we do sin, we can blame it on someone else. That’s what sinners do.

“They shouldn’t have made fun of me…”

“She shouldn’t have been wearing that revealing outfit…”

“My husband doesn’t understand me…”

“I come from a broken home…”

In all of our excuses, we human beings pretend that we, innocent little lambs, would never do anything wrong, if it weren’t for our being misled, provoked, sinned against, enticed, or tested by some “mother of defilement.”

The Pharisees and scribes were so convinced of the intrinsic goodness of Jews, if not of the rest of the human race, that they misused the Laws of God. They turned the observance of these Laws into ladders by which people could climb to life with God, to righteousness.

But righteousness, or rightness with God, has never been something human beings could earn.

Righteousness has always been a gift God gives to those who trust in Him.

The Bible says of ancient Israel’s patriarch: “Abram [later Abraham] believed the LORD, and he [God] credited it to him as righteousness.” (Genesis 15:6)

As part of the Law God gave to His people, the Jews, God designated some animals as clean and others as unclean. The clean animals were those that could be used in offerings to God and for eating. The unclean animals could be used for neither purpose.

God didn’t make these designations because there’s something more sinful about a pig than there is about a lamb. God, in fact, gave the Jews these dietary laws for a different reason.

Back in 1970, Sparky Anderson became the youngest manager in major league baseball when he took the helm of the Cincinnati Reds. That was a period in which, even more than today, most players wore their hair long and had beards, sideburns, or moustaches. Early on, Anderson met with his players and asked them all to cut their hair short and lose their facial hair. He didn’t do this because he thought there was anything wrong with long hair or beards. He just wanted his team to look different from every other team in baseball. He wanted to set them apart.

God gave dietary ordinances to His people to set them apart from the rest of the world. Until the Messiah came into the world, the Jews were to observe these ordinances as signs that they were part of God’s team in and for the world’s salvation.

As Mark observes in today’s Gospel lesson, Jesus has now abolished such laws.

And after Jesus rose from the dead and ascended to heaven, He told Peter he could eat of any animal in the world, saying, “Do not call anything impure that God has made clean.” (Acts 10:15)

The Pharisees and Scribes saw the observance of dietary laws not as something Jews did as a sign of their identity with God and His people, or as a sign of their gratitude for God’s grace, but as something they had to do to be holy, to be righteous. But as Jesus explains to the disciples in private in today’s lesson: “...nothing that enters a person from the outside can defile them...For it doesn’t go into their heart but into their stomach, and then out of the body.” (Mark 7:18-19)

He then identifies twelve common human sins, six of them sinful behaviors and six of them sinful attitudes: “sexual immorality [that is, sexual intimacy or sexual behavior outside of marriage between a man and a woman], theft, murder, adultery [this is sex outside of marriage between those married to other people], greed, malice, deceit, lewdness, envy, slander, arrogance, and folly [this is foolishness or recklessness].” (Mark 7:21-22)

All of these sins have something in common, Jesus says.

They’re not caused by our diet or what we watch on the Internet or our TVs.

They’re not caused by the devil, other people, or the world, although each of these things may present us with enticements to sin.

And none of these sins come from God. God doesn’t make you commit the sins you like to commit.

No, the reason we sin, Jesus says, is very simple: “All these evils come from inside and defile a person.” (Mark 7:23)

Now, people like the Pharisees and scribes, who think that they were born pure as newly-fallen snow must always look for something to make them right with God and their own consciences: a dietary law, a supposedly godly plan of self-improvement, another good deed, another act of penitence. All of these approaches lead either to a false sense of security in one’s own goodness or in despondence at the truth Saint Paul describes in Scripture: “what I want to do [a life of undefiled purity] I do not do, but what I hate [sin] I do.” (Romans 7:15)

Sin is an inside job and we there is nothing we can do to make ourselves clean.

Nothing that comes into us or at us from the world can make us unclean. We already are unclean. But there is One Who can enter our lives and make us clean!

Jesus cleanses all those who turn from sin and trust in Him of all their uncleanness.

The Bible tells us: “God made him [Jesus] who had no sin to be sin for us, so that in him we might become the righteousness of God.” (2 Corinthians 5:21)

Friends, we don’t need to simply be morally remodeled. Our sin isn’t like some minor traffic ticket for which we pay a nominal fine and go on our merry ways. Sin is who we are and our sinful nature warrants death, eternal separation from God. We need to die to our sin--as we do in Holy Baptism and every time we confess our sins to the Father in Jesus’ name.

I recently finished re-reading a novel that I wish everyone would read. It was written by a Swedish Lutheran pastor and theologian of last century, Bo Giertz. It’s called The Hammer of God and shows in the stories of several pastors over three centuries how, like the Pharisees and scribes, even pastors--ministers of the Word and Sacrament--can turn the Gospel into a set of laws that rob people of life with God.

In the latter chapters of the book, an older pastor confronts a younger pastor because the younger one has become a popular preacher by telling people every week how they have to try harder, how they have to show their commitment to Jesus, how they need to work at being holy. Preachers can gain big audiences by feeding people self-centered religiosity.

The younger pastor is astounded when some of the parishioners who most fervently embraced his preaching and teaching became so certain of their own goodness and self-generated righteousness that they effectively abandoned Christ, His cross, and the good news that we are saved by grace through faith in Christ alone. The young pastor himself became discouraged because he realized that he didn’t feel righteous or live sinlessly.

The older pastor said he would be interested in knowing what passages of the Bible the younger one underlined or noted in his reading.

There is a tendency among those who fall into thinking like that of the Pharisees and Scribes to do one of two things with their Bible notes and underlines. Either they note the things at which they feel they must do better or they note the perceived sins of rotten people they know.

But the older pastor issued a challenge. When you read the Bible, he said, make note and write in the margin two words, “For me.” Note the places in which God acts for you in Christ despite your sins and imperfections.

Christ took on human flesh for me.

Christ died for me.

Christ rose for me.

Christ instituted Holy Baptism for me.

Christ instituted Holy Communion for me.

Christ gives the gifts of repentance and renewal for me.

Your forgiveness, your life with God, your growth in faith: None of these things come to you by your efforts; they are gifts of pure grace from God.

First, He’s saying, “Don’t be proud”: None of us is pure inside. We are all, at best, sinners saved solely by God’s grace through faith in Jesus Christ. This side of the grave we remain saints and sinners.

And, Jesus is also telling us, “Don’t be ashamed”: Jesus Christ bore your sins at the cross, He loves you with a passion that not even death could overcome, and all who trust in Him will never be put to shame. All who believe in Him will share in His resurrection.

By His blood, Jesus has made you clean and has covered you with His righteousness.

And to that, all of God’s people can say a relieved and joyous “Amen!” 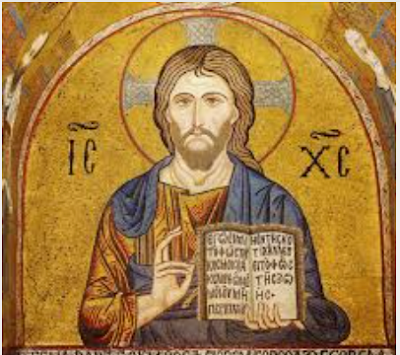 Posted by Mark Daniels at 9:40 PM No comments: