Email ThisBlogThis!Share to TwitterShare to FacebookShare to Pinterest
Labels: Romans 8, The Holy Spirit, The Holy Trinity

Posted by Mark Daniels at 12:13 AM No comments:

Posted by Mark Daniels at 4:49 PM No comments:

Yesterday saw the fiftieth anniversary of the Kent State University shootings in Kent, Ohio. I wrote this early this morning over on Facebook.

It's one of those events that happen in life when you remember exactly where you were when you heard about it.

I was spending the day at Columbus North High School doing an article for our West High School Occident newspaper about a typical day at another city high school, comparing and contrasting. I even remember the name of the guy who told me about the Kent State shootings, a North High student, president of the student council, someone I met precisely once.

I don't know where he'd heard about it, but he said, "I just found out that the national guard killed four students at Kent State." I couldn't believe it!

The Ohio Primary was the next day, May 5. Jim Rhodes, who had had what many would characterize as a successful two-term governorship, was running for the Republican nomination for US Senator. His opponent was Robert Taft, Jr. Taft was the grandson of a president and the son of "Mr. Republican," Bob Taft, Sr., and the father of a future Ohio governor. Taft obviously had solid name recognition, buttressed by the fact that he had been, back when such things existed, an at-large member of the US House of Representatives, representing the whole state. But Rhodes was so popular that he was expected to win handily.

Not after Kent State. He was the one who'd sent the Ohio National Guard onto the campus and, as a friend of min rightly pointed out on Facebook those guardsmen were probably not trained in crowd control. Rhodes lost the primary to Taft.

That aside, it was a moment when middle America, until that point accepting of Lyndon Johnson's escalations of the war and Nixon's Vietnamization policy (i.e., a head fake) in which he talked about withdrawal but escalated and widened the war, began to take a second look. People forget that polling at the time still found a majority of the American people supported the war effort. Two and a half years later, Nixon would defeat the World War II-hero, but total opponent of the Vietnam War, Senator George McGovern.

But on May 5, 1970, almost everyone, I think, was sickened by the death of four kids engaging in what appeared to be peaceful protest.

Was that the day America changed, when we moved from blithe complicity with the actions of our government, believing that our presidents would never tell us lies (as polling in the 1950s and 60s repeatedly showed) to where we are now: always cynical, never trusting, susceptible to every cockamamie conspiracy theory that comes down the pike?

Things like that rarely happen on a single day. It took a succession of days corrosive of trust and cohesion to turn America into the balkanized, distrusting rabble that it is today, so divided, suspicious, and sunk in our partisan tribal silos that we can't seem to muster the patriotism or common sense to address an obvious national emergency with resolve and unity. Supporters of the respective parties don't mind the outrages committed by pols from their own tribes, so long as they believe their preferred agendas are advanced.

Human sin and selfishness were not invented on May 4, 1970 or the other sad days that fueled a cynicism as unrealistic today as the credulity that once characterized Americans was.

But since the days of Johnson, a crude, well-intentioned egomaniac who lied to get us to fight in Vietnam, and the cynic Richard Nixon, who tried to steal our Constitution, the shadow of their sins have hung over the presidency, the government, and country.

We need to learn to trust each other again and we need leaders worthy of that trust.

Posted by Mark Daniels at 5:27 PM No comments:

It's Gut-Check Time for American Christians

Small groups of protesters, representing, at most, about 30% of the American people, have been protesting social distancing and sheltering-in-place orders lately, claiming them to be infringements on their personal freedom.

But here's what I think, folks, from my perspective as a Christian and a student of American history.

My freedom ends when it infringes on your freedom.

Babies and adolescents believe that freedom is being able to do whatever you want to do.

But when you grow up, you understand that, in Justice Holmes' famous example, freedom of speech does not allow you to yell, "Fire!" in a crowded theater.

The vast majority of Americans want a slow, controlled, and, when needed, easily-reversed, return to more normal social distancing. They want government to fulfill its function as pronounced in the Preamble of the Constitution, to form "a more perfect union" by striving to "establish Justice, insure domestic Tranquility, provide for the common defense, promote the general Welfare, and secure the Blessings of Liberty to ourselves and our Posterity..."

Freedom does not, whether from a Christian or a constitutional perspective, give anyone the right to willfully endanger others. The apostle Peter writes in Scripture to Christians, "Live as free people, but do not use your freedom as a cover-up for evil; live as God's slaves." (1 Peter 2:16) To be a slave of the God we know in Jesus Christ means to be set free to live lives of love for God and love for neighbor.

Yes, there are economic implications to continued sheltering-in-place. Our unemployment systems, operating on antiquated software, need to be updated. Government and all of us will probably have to do much more over the next year-and-a-half to help each other through this unprecedented crisis.

But on our currency, we Americans claim as our motto, "In God we trust," not "In money we trust." If we can take sensible, if sometimes unpleasant, actions to get through this crisis together, we will emerge stronger for it. We will preserve the most precious economic assets we have: healthy, living human beings.

It's gut-check time for Christians in America. Will we be full-tilt pro-life? Or will we join the pro-death advocates who say that having a few more bucks in their pockets is more important than the lives of their neighbors?

The answer should be clear. And most people know that. 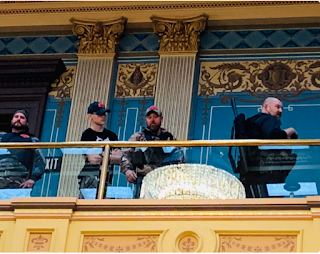 [Armed protesters in the gallery of the Michigan State Senate chamber in Lansing four days ago.]
Posted by Mark Daniels at 3:01 PM No comments:

Just click on the "...minutes ago" that appears below my name and it will take you to the two-minutes-twelve-seconds-long video.

Posted by Mark Daniels at 12:31 PM No comments: