Email ThisBlogThis!Share to TwitterShare to FacebookShare to Pinterest
Labels: Acts 27

My favorite chapter of Acts.

Email ThisBlogThis!Share to TwitterShare to FacebookShare to Pinterest
Labels: Acts 26

📖Buy me a book
Posted by Mark Daniels at 9:47 PM No comments:

Email ThisBlogThis!Share to TwitterShare to FacebookShare to Pinterest
Labels: Acts 25

📖Buy me a book
Posted by Mark Daniels at 9:42 PM No comments:

Email ThisBlogThis!Share to TwitterShare to FacebookShare to Pinterest
Labels: Acts 24

Email ThisBlogThis!Share to TwitterShare to FacebookShare to Pinterest
Labels: Acts 23

Am I Saved (Text)

A man telephoned his pastor. “I’m worried about my salvation. How do I know that I’m saved from sin and death, and hell?”

“John,” the pastor responded, “did you confess the words of the Apostles’ Creed during worship the other day? Did you say, ‘I believe in God the Father almighty...I believe in Jesus Christ, His only Son, our Lord...I believe in the Holy Spirit…’?”

“Yes,” John answered. “Did you believe that when you said it?”

“Well,” the answer came back slowly, “I wanted and I want to believe it.”

“Then,” said the pastor...who happened to be me, “exercising the Office of the Keys that Jesus gives to His Church, I can tell you confidently, John, that you are saved from sin, death, and hell through your faith in Jesus.”

When John asked how that was possible, even for someone who doubted his own faith, I told him, “I learned long ago that only the people who want Jesus concern themselves with whether they’re saved from sin and death. If you didn’t believe in the God we meet in Jesus, you wouldn’t wonder you were saved or not.”

The reason for this is simple.
The very desire to trust anyone that we can’t see, touch, or manipulate for our own purposes and ends is foreign to our human nature.
When we want to believe that Jesus is God in the flesh Who died and rose to set free people dying in their sin to live with and for God forever, it proves that God and His Gospel Word about Jesus are at work in our lives.

In today’s Gospel lesson, Matthew 16:13-20, one of Jesus’ first followers, Simon the son of John, who we know as Peter, tells Jesus, “You are the Messiah, the Son of the living God.” (Matthew 16:16)
Messiah, a word used in the Hebrew of the Old Testament, is a title for the anointed King God promised through the prophets. The Messiah, God promised, would bring God’s kingdom into the world.
Christos or Christ is the translation of that term found in the Greek in which the New Testament was written.
Simon Peter was saying that he believed that Jesus was (and is) that Messiah, that Christ. He also confessed that Jesus was (and is), “the Son of the Living God.” Peter was confessing what Paul would later confess of Jesus, that Jesus is “...the image of the invisible God.” (Colossians 1:15)

How did Simon, Paul, and the other first Christians come to confess Jesus in this way?
How can we?
Faith doesn’t come from trying to talk ourselves into it.
It doesn’t come necessarily by having amazing experiences or witnessing miraculous signs either.
When I was in my early teens, my mother was miraculously delivered from a cancer the doctors knew was in her body, but disappeared on the day of her scheduled surgery. That “disappearance” occurred after I had heard and seen many people praying for mom. That miraculous though, didn’t stop me from being an atheist for the next decade or more.

So how do we come to faith or to even want faith in Jesus?
After Simon confessed Jesus as the Christ and as God, Jesus tells him: “Blessed are you, Simon son of Jonah, for this was not revealed to you by flesh and blood, but by my Father in heaven.” (Matthew 16:17)

If you and I believe in Jesus as Savior and God--or simply want Him as Savior and God, it has nothing to do with us and everything to do with God and His powerful Word working in our lives.
“...faith comes from hearing the message, and the message is heard through the word about Christ,” Romans 10:17 says.
“I want you to know,” the apostle Paul writes in 1 Corinthians 12:3, “that no one who is speaking by the Spirit of God says, ‘Jesus be cursed,’ and no one can say, ‘Jesus is Lord,’ except by the Holy Spirit.”
It’s God’s Word--heard, seen, and experienced in the Scriptures, in conversations with family and friends, in sermons, in hymns of praise and psalms of lament, in Holy Baptism, in Holy Communion--that God uses to create faith in Jesus within us.
Only God can give us the power to believe that, despite our sins and unworthiness of God’s favor, we are saved from sin, death, and futility by God’s charity--His grace--through faith in Jesus Christ alone.

Our salvation then doesn’t depend on how we may feel on any given day, or if we think we’re being good people. Our salvation depends on the power of God’s Gospel Word, given to us in Christ.
Through our encounters with God’s Word, God will, in turn, convict the wandering of our need to turn to Christ for forgiveness and renewal or convince us of God’s undeserved grace for sinners like us.

In The Small Catechism, Martin Luther famously says, “I believe that I cannot by my own reason or strength believe in Jesus Christ or come to him; but the Holy Spirit has called me through the Gospel, enlightened me with his gifts, and sanctified and preserved me in the true faith.”

These were more than just words for Luther. They were cherished truths that God impressed on him at a time of despair like that of the man who called me up one day wondering if he was saved by Christ or not.
As a young monk and Bible scholar, Luther set out to understand Romans 1:17, where, quoting from the Old Testament book of Habakkuk, the apostle Paul says, “The righteous will live by faith.”
Luther had always thought the passage meant that people who had attained spiritual superstardom--righteousness--would display acts of righteousness and faith that would make them worthy of God’s salvation. But Luther knew that he was, like you and me, a sinner not worthy of being saved.
How could he possibly be righteous enough to depend on faith for his salvation?
But as he meditated on this passage and studied the Bible for insights as to its meaning, it suddenly dawned on Luther that the sinner isn’t made right with God by doing the right things or thinking the right thoughts; the sinner is saved when, despite their sins, just like Peter in today’s Gospel lesson, we receive the gift of faith through the Word about Jesus.
We are saved from sin and death when empowered by the Word of the Gospel, we can confess that Jesus is the Christ, the Son of the Living God.
Luther said that when he realized this, it was as though he “had entered paradise itself through open gates.” He didn’t have to be perfect; Jesus shared His perfect righteousness and His perfect defeat of sin and death through His cross and resurrection with all who, enlivened by God’s Word, could say, “Jesus is my Lord.”

Friend, God’s Word is clear. “All who call on the name of the Lord will be saved.”
Don’t worry that you’re not worthy. You’re not and neither am I.
Don’t worry about honestly recognizing that even the things you do that others might call good or righteous are tinged with your selfishness and desire to be known as a “good person.”
Don’t worry that you’re subject to temptation, that you must daily repent of the sins you know you’ve committed, or that you don’t always “feel” very Christian.
If you turn to Jesus, if you want Jesus, then, despite your imperfections, you have a faith from God in Jesus that, as Jesus says, “the gates of Hades [that is, the gates of death] will not overcome…” (Matthew 16:18)
If you remember nothing else from this message today, remember these words from the apostle Paul that might be characterized as a Cliff's Notes of today's Gospel lesson: “If you declare with your mouth, ‘Jesus is Lord,’ and believe in your heart that God raised him from the dead, you will be saved.” (Romans 10:9) That's good news!
Amen! 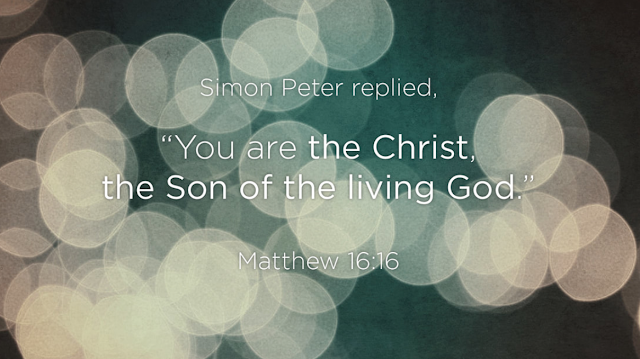 Posted by Mark Daniels at 7:10 PM No comments:

Posted by Mark Daniels at 11:47 AM No comments: