The Next Facebook Live Study: The Gospel of Luke 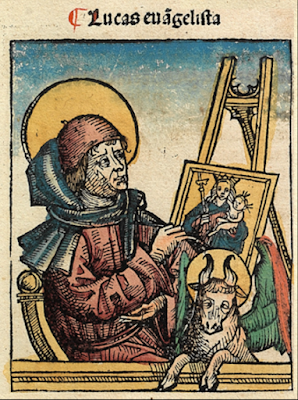 I've decided to delay the start of our next Facebook Live Bible study until Monday, January 25. As usual, the weeknight study will begin at 9:00 PM EST. We'll be looking at the Gospel of Luke. I hope that you can join us. Please invite your friends to watch as well. And remember that if you can't be with us while we're doing the study live, you can always find them among my Facebook videos or on my blog (markdaniels.blogspot.com ). The Facebook address for the studies is
https://www.facebook.com/mark.daniels.161
.
Posted by Mark Daniels at 4:16 PM No comments:


Posted by Mark Daniels at 9:52 PM No comments:

For Martin Luther King, Jr. Day, this rendition of 'Fool on the Hill' from Paul McCartney's 1989-90 world tour.

To a world mired in death, the gospel message of new and everlasting life through faith in Jesus Christ, the belief that animated King's vision, is foolishness.

To a world mired in hate and self-interest, King's vision of "the beloved community" in which all God's children participate is threatening foolishness.

But, as a fool for Christ, I still believe in King's dream.

We need that dream and we need Jesus Christ now, today, more than ever!

Posted by Mark Daniels at 5:24 PM No comments:

Under the Fig Tree?

Good Sunday to you, friends!

Below, you'll find the video of today's online worship from Living Water Lutheran Church of Centerville, Ohio. Further down the page, there the text of the message I shared during worship. I hope that you find it helpful and that it gives you deep appreciation of how much God loves you. Have a good week!

John 1:43-51
A few years ago, after a visit with my dad in Columbus, I decided to take a walk at a Metropark. It has lots of walking paths, some of them deep into wooded areas. For a person with a poor sense of direction, like me, the walkways can be daunting.
You can guess what happened. As the sun began to go down, I got lost.
For several hours, I walked along paths I thought I wanted to be on, only to hit dead-ends, forced to start all over again.
Eventually, I found a way to a parking lot where I was sure I’d find my car. It turned out to be the wrong parking lot!
As the darkness gathered, I came upon the home of a park ranger who was just about to do his last patrol of the day. He let me ride with him from parking lot to parking lot until at last, I found my car.
As I got on the road, the fact that I was finally safe and on my way home seemed almost too good to be true.
In today’s gospel lesson, John 1:43-51, a man has an encounter that defies all his previous expectations--it seems too good to be true, yet brings him relief beyond his greatest and most fervent imaginings.
The man is Nathanael. Shortly after hearing John the Baptizer point to Jesus as “the Lamb of God” Who takes away the power of sin and death over those who follow Him (John 1:29, 36), a Greek-speaking Jew named Philip responds to Jesus’ invitation: “Follow Me.” (John 1:43)
Having seen and experienced Jesus for himself, Philip, our gospel lesson says, then tells Nathanael that in Jesus “[w]e have found the one Moses wrote about in the Law, and about whom the prophets also wrote—Jesus of Nazareth, the son of Joseph.” (John 1:45)

A lot has been made of Nathanael’s response to Philip’s assertion that Jesus was the long-promised Messiah. Nathanael asks: “Nazareth! Can anything good come from there?” (John 1:46) In preaching and teaching about this text, I’ve made much of it myself, talking about how Nazareth was a podunk town of no consequence, which it was.
But I’m beginning to realize that Nathanael’s initial skepticism about Jesus being the Messiah had little to do with the deficiencies of Nazareth as a tourist destination.
It had even less to do with Nathanael being some world-weary sophisticate like the apostle Thomas who found it hard to believe the promises of God.
Nathanael, it turns out, was a man of childlike faith who was even more desperate with anticipation for the Messiah than I was to find my car that day in the park!
After Philip invites Nathanael to come and see Jesus for himself, Nathanael follows Philip. As the two approach Jesus, Jesus says of Nathanael, “Here truly is an Israelite in whom there is no deceit.” (John 1:47)
Now, by the time Jesus walked on the earth in the first century AD, nobody was really called an “Israelite.” People were Judeans, Samaritans, Galileeans, and so on. Israelite was an old-fashioned, passe term. Nonetheless, Jesus, I think uses the term deliberately.
The first of God’s people to be called Israel, a term that means, one who wrestles with God, was Jacob.  Jacob, son of Isaac, grandson of Abraham, was, as you know, most of his life a deceiver and a schemer. But Jesus says that Nathanael, "an Israelite," is a man of God with no deceit about him: honest, open.

Natahanel is baffled by how Jesus describes him. He’s never met Jesus. “How do you know me?” he asks Jesus (John 1:48).
Of course, the short answer Jesus could have given would have been, “Because I’m the Word made flesh, God among you. I know everything!” (John 1:14).
But Jesus’ reply demonstrates that in Him, we meet a God Who knows each and every one of us as individual people, knows us, in fact, intimately and well from the moments of our conceptions (Psalm 139:13). Jesus tells Nathanael: “I saw you while you were still under the fig tree before Philip called you.” (John 1:48).

Jesus knows Nathanael was under a fig tree. What on earth does that mean?
And what has it got to do with you and me?
I think it’s significant in several ways.
First, some of the ancient rabbis believed that the tree of the knowledge of good and evil, the fruit of which Adam and Eve were told not to eat but which they did eat, bringing humanity’s fall into sin, was a fig tree. This, they explained, is why, some of the rabbis said, God sewed clothing made of fig leaves for Adam and Eve.
There’s a sense then in which every human being is “under the fig tree.” We’re born under the condemnation of sin and death, in need of the salvation gives to those who repent and believe in the crucified and risen Jesus.
Jesus sees in each of us sinners in need of His saving work. That’s what He saw in Nathanael too.

But there’s another way in which Nathanael could be "under a fig tree." Take a look at these pictures of fig trees. 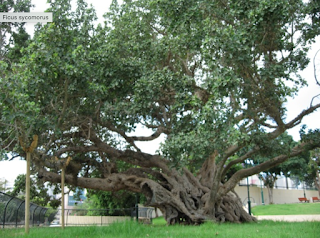 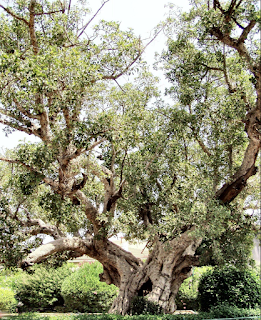 Fig trees, you see, they can become large and sheltering. Their roots often explode out of the ground.
In ancient times, the roots of fig trees were often used by rabbis as shady classrooms for digging into God’s promises. Among those promises is one God gave through the prophet Zechariah about the kingdom of God to be brought to believers by the Messiah, the Christ: “‘In that day each of you will invite your neighbor to sit under your vine and fig tree,’ declares the Lord Almighty.”(Zechariah 3:10)
Nathanael was one of those students of God who, with the faith of a child, anticipated the day when the Messiah would embrace all who believe in Him into the Kingdom of God.
That’s why Nathanael, on hearing that Jesus had seen him under a fig tree, understood that Jesus knew everything about him and loved him anyway. And so, he burst into a confession of faith: “Rabbi, you are the Son of God; you are the king of Israel.” (John 1:49)
Nathanael, who had known himself lost and looking for his Savior for years, now knew that he had been found by the One he had longed for all his life!

Jesus marvels at this Israelite’s simple faith. “You believe[ because I told you I saw you under the fig tree. You will see greater things than that…[and then, alluding once more to the old deceiver Jacob, who once wrestled with God while angels ascended and descended a ladder between heaven and earth, Jesus promises] “Very truly I tell you, you will see ‘heaven open, and the angels of God ascending and descending on’ the Son of Man.” (John 1:50-51)

So, what’s the point of it all, friends?
Just this.
We’re born into this world under the shadow of the fig tree--under the shadow of sin and death. Left to our own devices, we will remain under that shadow eternally.
But Jesus has come to bring us forgiveness and new life.
In Him, heaven itself is opened to us, God is present for us here and now, and God gives us eternity with Him.
Do you doubt it?
Come and see. Tomorrow, as you begin your day, turn to God, confess your sins and receive forgiveness in Jesus’ name, consider God’s Word, and then know that you can trust that you live in the shelter of Jesus all day long.
Later this morning, receive His body and blood, His presence with you, and His forgiveness for you through the sacrament.
By these means--Word and Sacrament, Jesus invites you to come and see His love and grace for you and all who trust in Him, and He will show you again that no matter how lost you may sometimes feel, heaven is yours and you belong to God forever. Amen

Posted by Mark Daniels at 3:22 PM No comments: