Try Not to Kill Your Neighbor 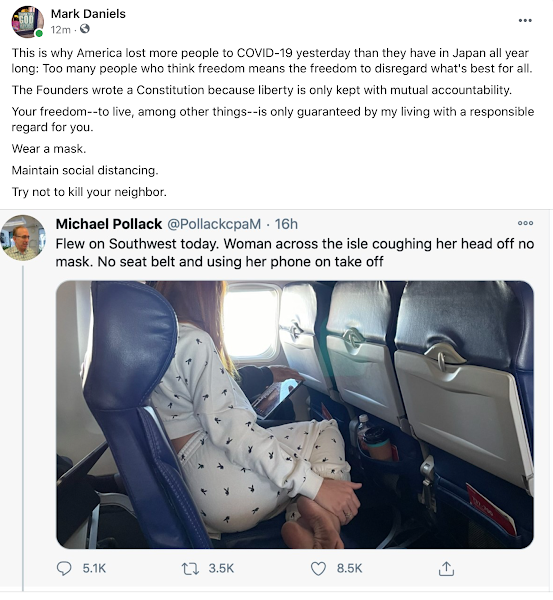 Posted by Mark Daniels at 1:45 PM No comments:

The Biblical Background of 'The Augsburg Confession,' Part 13

Here, we look at the background to Article 12, which deals with the subject of repentance.

The Biblical Background of 'The Augsburg Confession,' Part 12

The Biblical Background of 'The Augsburg Confession,' Part 11

Posted by Mark Daniels at 10:13 PM No comments:

The Biblical Background of 'The Augsburg Confession,' Part 10

Posted by Mark Daniels at 12:22 AM No comments:

Father to the Fallen

Here, friends, is online worship from Living Water Lutheran Church in Centerville, Ohio, for November 29, 2020. Below the video, you can find the written text for this Sunday's sermon. Have a good week: Stay safe and know that God loves you!

Isaiah 64:1-9
A seminary professor tells the story of the day he went to Toys R Us with his young son, Christopher, and becoming separated from the boy. When the prof finally realized that the boy wasn’t with him, he panicked. He ran up and down aisle after aisle, but couldn’t find Christopher. Finally, he found a guard, explained his situation, and asked if the store had surveillance cameras. If they did, could they scan each aisle? “Yes,” the guard answered.

Soon, the guard took the father to a bank of video monitors. The guard panned over every aisle of the store. Eventually, they spotted Christopher, on the floor, surrounded by new toys but crying his lungs out, certain that he would never see his father or his family again. The guard let Christopher’s dad get on the intercom while keeping the camera trained on the boy. “Christopher. Stay where you are. It’s Daddy. Don’t move...I’m coming.”

Considering young Christopher’s experience at the Toys R Us is a good way for you and me to think about the season of Advent that begins today and specifically, about our first lesson for this morning, Isaiah 64:1-9.

Advent, like Lent, is a time for repentance and self-examination, a time not just to prepare to celebrate the birth of Jesus, but also to remind us to daily prepare for His return at the end of this world.

When Jesus returns, He will judge all people.

Those who have, with repentance and faith, turned to Him for forgiveness and life, will be raised to live with Him for eternity.

Those who have gone their own ways will go to an eternity of wrath and separation from God.

Advent, like Lent, begins with despair over our human condition, over how we wander from God, how we need to return to the God revealed in Jesus so that, through faith in Jesus, we can be covered in God’s forgiveness and Jesus’ righteousness.

Young Christopher was lost to his father when he became more taken with the colors, movements, noise, and excitement of the toys around him than he was with following his dad. Fortunately, he had a father who wasn’t willing to give up on looking for his lost child.

You and I all have a Father like that--only infinitely and eternally better--ourselves.

Isaiah, from whose book our first lesson for today comes, was one of God’s greatest Old Testament prophets. He lived from about 741 to 680 BC, in Judah, the southern kingdom, that had been parceled from ancient Israel soon after the death of Israel’s third king, Solomon.

Judah’s religious and civic life was centered on Jerusalem, where God dwelt in the temple. Because of this, it seemed, the people of Judah lived with a sense of superiority and entitlement.

But, like Christopher, they also wandered from their Father, God: going through the motions in their worship life, sinning unrepentantly, worshiping false gods, engaging in injustice or indifference to orphans, widows, and immigrants and strangers who sought refuge among them, embracing sexual immorality and economic exploitation.

Isaiah, like the other prophets God sent to His people, tried to tell Judah that God was not pleased with their unfaithfulness and that they needed to repent and return to God. If they didn’t, God would take their land from them and God would send them into exile to become servants in foreign lands.

But the people didn’t listen.

Today’s first lesson comes at a point in Judah’s history when the prophecies of Isaiah and other prophets had come to pass. The people of Judah had lost their land and were in exile, in despair. They hoped that God would find, forgive them, and restore them.

The words God gives to Isaiah show us that God is out to save and reverse the fortunes of much more than a single ancient nation. To Judah in its despair (and to us, in ours), God gives a message that is for all who have wandered from God.

Look at Isaiah’s words for today. “Oh, that you would rend the heavens and come down, that the mountains would tremble before you! As when fire sets twigs ablaze and causes water to boil, come down to make your name known to your enemies, and cause the nations to quake before you! For when you did awesome things that we did not expect, you came down, and the mountains trembled before you. Since ancient times no one has heard, no ear has perceived, no eye has seen any God besides you, who acts on behalf of those who wait for him. You come to the help of those who gladly do right, who remember your ways.” (Isaiah 64:1-5a)

Here, through Isaiah, a people repentant for their sin, aware of their need of God for forgiveness and life, ask God to come to them, the way He had to their ancestors at Mount Sinai.

There, you’ll remember, as the mountain and the people trembled in fear, God made His covenant with them to be their God, though they didn’t deserve His love or favor--any more than we do--and also gave them His Law.

It’s as if the people are waking up from a long bewitchment of earth-bound, sin-imprisoned thinking and living.

They now understand how they had, by their sin, built up a wall between God and themselves. They remember that God loves them and that they need His love. And so, they pray for forgiveness.

But the people also wonder if God can ever love or forgive them again:  “But when we continued to sin against them, you were angry. How then can we be saved? All of us have become like one who is unclean, and all our righteous acts are like filthy rags; we all shrivel up like a leaf, and like the wind our sins sweep us away. No one calls on your name or strives to lay hold of you; for you have hidden your face from us and have given us over to our sins.” (Isaiah 64:5b-7)

Here is an honest statement of fact for both the people of captive Judah and for you and me: Despite our pride and self-righteousness, our certainty of our goodness, our inborn desire to be our own gods, our indifference to God, and our indifference to the needs of the spiritually-disconnected, the hungry, the poor, the victims of injustice, we know that we are sinners in need of the forgiveness God offers to those who repent and trust in the One Who had torn open the heavens and come to us, died for us and risen for us: Jesus.

It was to this honesty, that God responded and came to His people to forgive and restore them.

And it is this kind of honest confession of our sin and our need of the God we know in Jesus that God will respond today.

Knowing how God forgives and restores those who respond to His call for them is what lay behind the words at the end of our lesson from Isaiah today: “Yet you, Lord, are our Father. We are the clay, you are the potter; we are all the work of your hand. Do not be angry beyond measure, Lord; do not remember our sins forever. Oh, look on us, we pray, for we are all your people.” (Isaiah 64:8-9)

We will best keep Advent, best keep our lives on Earth, and best prepare for Christmas if we too, recognize God as our loving Father, who wants, by His grace, to restore to us what it means to be a human being: a child of God set free by grace through faith in the crucified and risen Jesus to live in love for God and love for others.

When, after waiting for his father to find him, you can bet that young Christopher ran into his father’s arms.

This Advent season, may we run to God the Father, Who we know well in Jesus, again and again, and experience the joy of being in His strong, gracious arms.

Then, focused on our Lord, unlike children chasing after the temporary pleasures of this world, we can live in the freedom to be about living as human beings made in God’s image live: honoring God, loving our neighbor, making disciples, and seeking justice and the good of others more than for ourselves. Amen
Posted by Mark Daniels at 6:53 PM No comments: