Posted by Mark Daniels at 10:44 PM No comments:

Posted by Mark Daniels at 10:23 PM No comments:

Posted by Mark Daniels at 1:03 AM No comments:

When Forgiveness Seems Too God to Be True

I almost always begin my quiet time with God each morning in prayer, starting by confessing my sins.

Today, as I was confessing my sins, asking God to both forgive the wrongs of which I was aware and the ones I'd committed thoughtlessly just because of my sinful nature, my mind turned to sins which I've long since repented in Jesus' name and am sure that God long ago forgave. My guilt seemed to return and I wondered whether God really could have forgiven me.

When that happens, I'm certain either my personal insecurities, my sinful nature, the devil, or all three factors are playing games with me.

Recognizing what was going on, I asked God to assure me again that because of what Jesus has done for us all on the cross and the gifts of repentance and faith in Jesus has given to me by God's Holy Spirit, I can live in the confidence that Jesus has covered me in grace, removed the death sentence for sin I deserve, and given me a place with Him forever.

I was still unsettled though when I turned to the readings for today in 'The One-Year Chronological Bible.' In one verse, God answered my prayer for assurance about the forgiveness, grace, and everlasting life He gives to those who repent and believe in Jesus.

There, Jesus asks the chief priests and elders who have confronted Him in the temple courts in Jerusalem: "'Which of the two did what his father wanted?' 'The first,' they answered."

Jesus poses the question after telling a parable--a story--about a father and his two sons. The father wants the boys to go out and work in the family vineyard. He tells the first son what he wants the boy to do. "I will not," the son answers. But later, the son thinks better of it and obeys his father. Then the father told the other son to go into the vineyard to work. "I will, sir," he says compliantly, but then went nowhere near the vineyard.

The first son had initially resisted his father's call to obedience, then quietly obeyed. The second son had cheerfully (and hypocritically) affirmed he'd do what his dad wanted, then ran off and did what he wanted to do instead.

Who, Jesus asked His questioners, had done the will of the father? Obviously, it was, despite his words, the first son.

The old, long-forgiven sins that were troubling me this morning were ones I committed after I'd said yes to God, to repentance and belief in Jesus, to seeking to live God's way. They were sins that sneaked into my life, then became willful habits, and nearly crowded Jesus out of my life. I regretted them bitterly and repented for them with truth before God long ago.

The Holy Spirit had done His work on me, causing me to renounce and turn away from willful disregard of God's good will for my life and, to borrow words from King David's penitential psalm, created a pure heart within me (Psalm 51:10).

Like the first son, I'd said no to God, then changed my mind about my sin and, instead, sought God and His will. (By the way, the most characteristic word for 'repent' in the Greek in which the New Testament was originally written is 'metanoia,' a word literally meaning 'change of mind.')

But, when we consider our sins and God's righteousness, it's sometimes hard to fathom how completely God loves and forgives us. Without a daily return to Christ and His Word, the devil, the world, and our sinful selves can cause us to doubt His grace, His forgiveness, even His existence.

Today though, in the words of Jesus' opponents summarizing Jesus' parable, was God's answer to my insecurities. Because the Holy Spirit, using God's Word, had long ago "changed my mind" about those sins I was rehashing today, I could end my quiet time with thanks and praise to God for His grace and goodness. God was telling me, "Mark, those sins you're rehashing I'd already forgotten."

When the old sins God has forgiven us taunt us, God's Word assures us that "as far as the east is from the west, so far has he removed our transgressions from us." (Psalm 103:12) 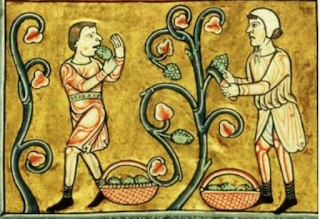 Posted by Mark Daniels at 11:12 AM No comments:

Posted by Mark Daniels at 10:13 PM No comments:

What God's Grace Does to Us

Jesus entered and ate in the house of Zacchaeus, a wealthy tax collector. Zacchaeus was so grateful that Jesus was willing to be seen with and have fellowship with him that he turned away from his former life (only a cheating tax collector could have been as wealthy as Zacchaeus was) and said, “Look, Lord! Here and now I give half of my possessions to the poor, and if I have cheated anybody out of anything, I will pay back four times the amount." (Luke 19:8)

That's what happens when we encounter God's Law and Gospel in Jesus Christ.

The Law convicts us of our sin and the Gospel, the good news of new life for all sinners who turn from sin (repent) and believe or trust in Jesus, convinces us to believe that Christ alone can cover our sin, change our lives, make us acceptable to God, and grant us a place in His eternal Kingdom.

Shortly after Jesus ate with Zacchaeus, Jesus took up a cross and, although He never sinned, died on it, offering Himself as the perfect sacrifice for our sin. Jesus took the condemnation of death and the separation from God that all we Zacchaeuses deserve.

So that when the Father raised Jesus, God the Son, from the dead, He could pave a way for us to, like Zacchaeus, turn from sin and believe in Christ, gaining a share in His eternity. All who believe in Jesus will one day, be raised with Him.

But faith in Jesus gives us more than a share in eternity, it also changes our present.

When God's charity came to Zacchaeus, God set the tax collector to live differently. God gave him a heart for the poor and the will to make things right with those he cheated.

Notice that Zacchaeus didn't think he needed to do these things to be saved from sin and death. He did them after Jesus embraced him in grace and forgiveness.

We can't earn the love of God that comes to us in the crucified and risen Jesus. But when it does come to us and we are stirred to faith, acts of love, restoration, and justice will surely follow.

Posted by Mark Daniels at 1:02 PM No comments:

Posted by Mark Daniels at 10:32 PM No comments: