Posted by Mark Daniels at 10:15 PM No comments: 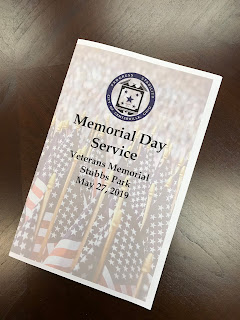 Yesterday, I was happy to share the invocation prayer as well as the benediction for the Centerville Memorial Day Service. Our guest speaker was Captain Matt Hebert, who commands the Naval Medical Research Unit at Wright Patterson Air Force Base here in our community. Music was provided by the  Centerville community band and community choir, as well as a bagpiper who played Amazing Grace. Local Scouts led us in the Pledge of Allegiance.

Here's the invocation prayer I offered:


Gracious God and Father, we cherish the freedoms we enjoy in America. For more than 240 years, these freedoms have been, in large part, secured and established by the ultimate sacrifice paid by members of our armed forces: the Army, Navy, Air Force, Marines, and Coast Guard. Today, we gather to remember and give thanks for these honored dead. But we also ask that You would empower us to honor them on more than Mondays in May. Grant that, with gratitude to the fallen, our entire lives will be lived as  grateful citizens who cherish, not only our freedoms, but also the example of service and sacrifice we honor today. In the name of Jesus Christ we pray. Amen

We also prayed for a member of the Honor Guard who fainted early in the program. Because the Honor Guard was composed of not only veterans, but first responders, the gentleman received quick medical attention.

Among the notable guests present was a 101-year-old veteran of the Army Air Force. Another World War II veteran made a point of introducing himself to me after the program, saying, "I'm a Lutheran too." He seemed proud that a representative of the Lutheran community was taking part in this commemoration of the fallen.

Last year's speaker, another World War II veteran and a retired Wright State University philosophy professor, sat behind me. A member of our congregation was a volunteer for the event and several of our members were there to honor, commemorate, and pray.

I always enjoy this event.
[I'm the pastor of Living Water Lutheran Church in Centerville, Ohio.]

Posted by Mark Daniels at 10:26 AM No comments:

Intimacy with the Almighty

[This message was shared during worship with the people and friends of Living Water Lutheran Church in Centerville, Ohio, earlier today.]

John 16:23-33
Sometimes, people tell me, “You have a pipeline to God. Could you please pray for me?” I usually tell them something like, “I’ll be happy to pray for you. But my pipeline isn’t necessarily better than yours.”

For some, my response is mystifying and they tend to say their goodbyes quickly. But others ask me what I mean. I explain that I’m as imperfect and as much of a sinner as anyone else, that I’m not worthier of God’s attention to my prayers just because I’m a pastor, and that anyone can pray. Sometimes, the conversations go longer and deeper than that, but only rarely.

Human beings have an inborn terror of God.

Adam and Eve enjoyed an intimate relationship with God until they fell into the sin of seeking to be gods themselves. When that happened, they hid from God. They were afraid that, because of the distance now between themselves and God, coming into His presence would bring the full condemnation of God’s Law crashing down on them.

Their feelings are understandable.

Sinners, naked in their sin, living without repentance, forgiveness, or faith, have every reason to be terrified. Martin Luther said that when human beings are out of sync with God, even the rustling of a wind can terrify us, filling us with fear that it--or any other mysterious "omen"--may be bringing God’s judgment.

For many people, the prospect of coming into God’s presence is a fearful thing. Yet, in the interest of “covering all their bases,” they will sometimes approach people they deem holier than themselves to use their “pipelines” on their behalf. And some people, thinking themselves pious, will appeal to "superheroes of the faith," especially dead ones, to pray to God the Father for them.

But listen: God the Father, Who sent Jesus to die and to rise for us doesn’t want there to be any walls between Him and us.

Jesus died to give us complete, intimate contact with our Father in heaven.

Because of what Jesus has accomplished in the crucifixion and resurrection, it’s possible for us to go directly to God the Father without fear, not because we’re perfect, but because He is. That’s what today’s gospel lesson is about.

Take a look at the first part of John 16:23-33, please. This is a continuation of words Jesus spoke to His disciples just before He was arrested. Verse 23: “In that day [Jesus says] you will no longer ask me anything. Very truly I tell you, my Father will give you whatever you ask in my name. Until now you have not asked for anything in my name. Ask and you will receive, and your joy will be complete. Though I have been speaking figuratively, a time is coming when I will no longer use this kind of language but will tell you plainly about my Father. In that day you will ask in my name. I am not saying that I will ask the Father on your behalf. No, the Father himself loves you because you have loved me and have believed that I came from God. I came from the Father and entered the world; now I am leaving the world and going back to the Father.”

The “that day” to which Jesus refers is the day when He has been glorified, the day when He has accomplished His mission on this earth: Dying for our sins, rising to open up life to those who trust in Him, ascending to heaven. Once “that day” has come, Jesus is saying, the disciples, including you and me, will be able to go directly to the Father, ask for anything in His name, and receive it.

But what does it mean to ask in Jesus’ name?

Is the invocation of Jesus’ name a magical incantation binding on God the Father?

Is Jesus telling us to pray, like Janis Joplin, “Oh, Lord, won’t you buy me a Mercedes Benz?”

Listen: The baptized believer in Jesus is the beneficiary of what Jesus has accomplished for us on the cross and from the empty tomb.

When Jesus gave up His life, the temple curtain that shielded people from being in the direct presence of God the Father was torn. That means that nobody needs to use someone else’s pipeline to connect with God.

People baptized in the name of God the Father, Son, and Holy Spirit are covered with Jesus, not with their sins.

If you believe in Jesus, you are covered with Jesus, even on the days when you don’t feel like it. Christ is still the Lord Who died and rose for you and opened up a relationship with God for you no matter how happy, sad, elated, depressed, victorious, defeated, healthy, or unhealthy you may feel at any given time.

And when you are baptized in the name of the Father, Son, and Holy Spirit, not only do you have a connection with the Father made possible by Jesus for you, not only are you covered in Jesus’ identity so that when God looks at you, all He sees is Jesus, you also have God the Holy Spirit living in you!

In John 14, Jesus promised that He would send an Advocate for believers in Him: “...the Spirit of truth. The world cannot accept him, because it neither sees him nor knows him. But you know him, for he lives with you and will be in you.” (John 15:17)

To pray in Jesus’ name then is to speak to the Father directly, covered with Jesus and filled with the Holy Spirit.

This is true whether the person doing the praying is an elderly saint in a nursing home or the two young Living Water disciples who are receiving Holy Communion for the first time this morning, Eve and Addison.

But, this gives rise to a nagging question: Has God given you everything you’ve ever asked Him for?

All of us can point to prayers that weren’t answered the way we wanted them to be answered.

Jesus had the same experience. In the garden of Gethsemane, you remember, He prayed to the Father that His cup of suffering would be removed from Him. Jesus didn’t want the agony of the cross He bore for you and me. But then He prayed, “...yet not my will, but yours be done” (Luke 22:42).

And this tells us a lot about what it means to pray in Jesus’ name. It means to ask the Father to do His will in and through us, even when the answers God seems to give make no sense to us. (I say “seems to give” because it’s just possible that God’s final answer to our prayers is something we’ll never perceive or understand in this world!)

To pray in Jesus’ name is to trustingly lay ourselves, our world, and the people and situations about which we pray before God.

The apostle Paul says, “We do not know what we ought to pray for, but the Spirit himself intercedes for us through wordless groans. And he who searches our hearts knows the mind of the Spirit, because the Spirit intercedes for God’s people in accordance with the will of God.” (Romans 8:26-27)

To pray in Jesus’ name is to cede control of our lives and all for whom we pray to our Father in heaven.

Our words may be jumbled.

We may not understand all involved in what we pray for.

We may not know what God is going to do with our prayers or how He will deploy His power in the situations we pray about.

But we can trust that God does and will answer rightly, even when, like Jesus briefly did on the cross, we may think that the Father has forsaken us.

We can pray and we can live in the confidence of Jesus’ promise, made at the end of today’s gospel lesson: “In this world you will have trouble. But take heart! I have overcome the world.” (John 16:33)

Posted by Mark Daniels at 9:02 PM No comments: