How Sermons Happen...at least for me

For me, every sermon I’ve preached for the past thirty-seven years has started with prayer for the Holy Spirit’s guidance.

Typically, the process proceeds to sitting down and making notes on the text, including little reminders of Scriptural words, ideas, and motifs I suspect are at play in the text. As an example, my initial notes for this week are shown.
After this, I go to the original Greek of the text, in the case of the New Testament, or the Hebrew, in the case of the Old Testament. I’ll translate the Greek, which I know, and consult an online “interlinear” literal translation of the Hebrew texts because I never learned Hebrew. I’ll do studies of individual words in the text that seem important to me.
Then, I study what Biblical scholars have to say about the text.
To help me frame the sermon, I then try to articulate what the Law and Gospel couplets are in the text.
What are Law and Gospel?
‘The Formula of Concord,’ one of the basic confessional statements of the Lutheran Christian movement, says this about the Law. “Everything that proclaims something about sin and God’s wrath is the proclamation of the law, however and whenever it takes place.”
When a passage in Scripture reveals our sinful human nature that’s the Law. As the apostle Paul says, the most that God’s Law can show us is our unrighteousness. God’s Law is unable to give us a right standing with God. Preachers who only proclaim God’s Law or their own warped versions of that Law—as the Pharisees often scorned by Jesus did—render a disservice to God and those who hear them. If a sermon is only a guilt trip, it’s not a sermon.
The Gospel is altogether different from the Law, although the Law points us to our need of the Gospel.
Martin Luther wrote: “The gospel…does not preach what we are to do or to avoid. It sets up no requirements but reversed the approach of the law, and says, ‘This is what God has done for you; he has let his Sin be made flesh for you, has let him be put to death for your sake”…the gospel teaches exclusively what has been given us by God, and not—as in the case of the law—what we are to do and give to God.“
As one Baptist pastor writes: “Roughly speaking, the gospel is that Jesus died on the cross as your substitute and rose again from the dead. Jesus took away the sins of the world, including your sins…” (Shawn Lazar, ‘One Point Preaching’)
One of the things for which I repent when I look back on my old sermons is how often my sermons have amounted to faithless law diatribes rather than faithful calls to both repentance for sin and new life and forgiveness from the God now revealed to all people in Jesus Christ.
Once I’ve decided on a Law/Gospel couplet—most texts have many possible couplets, I come to the hard part. That’s finding the entry point, an idea, a story, a thought, that can help people enter into and be entered by the text and that may serve as a continuing motif by which the Holy Spirit can do His work on both congregation and preacher. The primary work of the Holy Spirit is described by Jesus in John 16:7-11 as basically to convict us of our sin and to convince us that God gives Jesus righteousness to those who believe in Jesus. “The work of God [for human beings] is this,” Jesus says in John 6:29, “to believe in the One He has sent.”
That’s how a sermon should end, assuring people we can trust that Jesus, God the Son, through His death and resurrection, has done everything necessary to eternally save us from our sinful selves. Our call is, by the power of God’s Spirit, the One Who gives the gift of faith, to trust in Jesus and what He has accomplished for us on the cross.
My aim in writing my sermons is to say enough but not too much. I write three pages, a space-and-a-half between lines, in 14-point Arial font. Sometimes, the sermons go just a little over three pages, others a bit less.
It’s by processes like these, I’m sure, that pastors all over the world try week after week to share the truth about you and God and to extend God’s grace to you. It’s wonderful, rewarding work, and some weeks, by the power of the Holy Spirit, it actually happens in helpful ways. 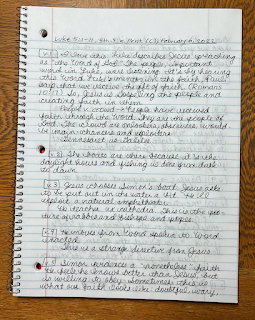 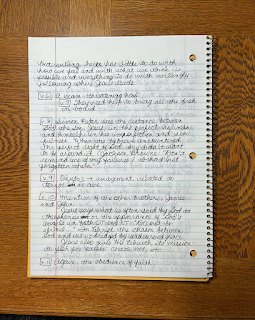 Posted by Mark Daniels at 3:57 PM No comments:

Posted by Mark Daniels at 10:43 PM No comments:

Posted by Mark Daniels at 10:21 PM No comments: