Justified by Grace Through Faith in Jesus Christ (with audio)

[This message was shared yesterday during Reformation Sunday worship with the people and friends of Living Water Lutheran Church in Centerville, Ohio.] 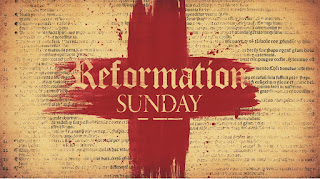 Today is Reformation Sunday, a day that calls us to focus on the whole idea of righteousness and what it means to be righteous.

These are two words used a lot in the Church, but hardly ever in the rest of the world. But according to the Bible, the Word of God, being righteous is of eternal importance to every human being. Righteousness is the quality we must possess in order to claim an eternal place in heaven and avoid eternal consignment to hell.

So, this business of being righteous is, to put it bluntly, the single most important thing any of us can appreciate, appropriate, or understand. And that’s no overstatement.

A young German, Roman Catholic monk named Martin Luther, who lived in the sixteenth century, knew how essential being righteous is for anyone to have a relationship with God, either now or in eternity.

Luther likely would have read words like those of Jesus in Matthew 5:20--”...unless your righteousness surpasses that of the Pharisees and the teachers of the law, you will certainly not enter the kingdom of heaven”--and think, “I need to get busy. I need to do more good things. I need to remember more of my sins and repent for them. Otherwise, God will damn me for eternity.” Luther thought that to become righteous, he had to work at it.

The problem was that no matter how much he repented or how many good things he did, he would always remember one more unrepented sin or commit new ones after confessing the old ones or fail to do enough good or fail to do good for the right reasons. Through daily experience, Luther learned that there was nothing that he could do to attain the title of righteous.

And guess what? Luther was right. Luther couldn’t make himself righteous.

Neither can you and I.

When we consider the sinful things we do or think or fantasize about, we’re bound to confess with King Solomon, who writes in Ecclesiastes 7:20: “...there is no one on earth who is righteous, no one who does what is right and never sins.” No one.

And so, Luther looked at how far he fell short of the moral standards of righteousness embodied in the Ten Commandments and realized that he would never measure up. Life with God was out of his reach.

Luther later confessed that there in the monastery, working at being righteous for God and realizing that he never could make himself righteous, he hated God. And in hating God, his guilt and his sense that there was nothing he could do to avoid being swallowed up by the fires of hell, only increased.

Then, something happened. At the direction of his superiors, Luther became a student and teacher of the Bible. (Dangerous things can happen to us when we start studying the Bible!)

Through his study of God’s Word, Luther came to realize that righteousness can never come to us through our perpetually failed attempts to keep God’s Law.

That’s what our second lesson for this joyous day, Romans 3:19-28, tells us. Take a look at what the apostle Paul, writing to Christians in the capital city of the Roman Empire in about 65 AD says, starting at verse 19: “Now we know that whatever the law says, it says to those who are under the law, so that every mouth may be silenced and the whole world held accountable to God. Therefore no one will be declared righteous in God’s sight by the works of the law; rather, through the law we become conscious of our sin.”

It’s good and loving for God to give us His commandments. They mark out the boundaries within which the righteous life happens, the ways in which our lives not only are more pleasing to God but also more fulfilling for us. All of us, for example, would acknowledge that it’s better for us not to steal, or covet, or live in hatred toward others. But because we can never keep God’s Law perfectly, His Law can never make us righteous.

At the most, the Law is a mirror that shows us the awful truth with which Luther wrestled about himself, which is true of us as well, that we aren’t righteous and can’t make ourselves righteous. The Law makes all our pretense of being wonderful people pure nonsense.

The Law is very bad news for anyone who thinks that being nice or doing good is enough to give us an in with God. But there is good news!

Verse 21: “But now apart from the law the righteousness of God has been made known, to which the Law and the Prophets testify. This righteousness is given through faith in Jesus Christ to all who believe. There is no difference between Jew and Gentile, for all have sinned and fall short of the glory of God, and all are justified freely by his grace through the redemption that came by Christ Jesus. God presented Christ as a sacrifice of atonement, through the shedding of his blood—to be received by faith. He did this to demonstrate his righteousness, because in his forbearance he had left the sins committed beforehand unpunished— he did it to demonstrate his righteousness at the present time, so as to be just and the one who justifies those who have faith in Jesus.”

To understand the message of these magnificent verses from our lesson, let’s consider the meanings of two words that Paul uses. They’re Greek words, of course, because Greek is the language in which Paul and the other New Testament writers composed their books and letters.

The first word is δικαιοσύνη, which we translate as righteousness.

The other word, which you see in verse 26, is justifies; in the Greek in which the apostle Paul wrote the verse, that word is δικαιοῦντα, a form of the verb dikaio.

These two words share the same root., which you can detect just in hearing them pronounced: dikaio, dikaiosune.

What these two related words tell us is that despite our sin, despite our inability to obey God’s Law or to make ourselves righteous, God GIVES Christ’s righteousness to those who trust Christ, to those in whom, by the power of God the Holy Spirit, the fire of the faith has been kindled by the good news of Jesus!

We can’t attain the righteousness necessary to enter God’s Kingdom.

We can't work to become righteous, but God makes righteous, He "righteous-fies," all who entrust their lives to Christ.

Jesus has perfectly obeyed God’s Law for us and then shares the perfection of His obedience, made perfect by His death on the cross on our behalf, with those who believe in Him to make us righteous.

Martin Luther said that when he realized that we can be justified--made righteous--not by anything we do, but only by faith in Christ through the charitable grace of God, it was as if the doors of heaven opened to Him.

Through Christ, he came to know God not as an angry judge, but as our loving Father.

And whenever we trust in Christ rather than ourselves, our efforts, our goodness, our achievements, our success, our worthiness, or our parents’ faith, heaven opens to us too.

Many of the self-identified Christians who get play in the media are people who seem to make a point of telling others how good they themselves are, how wholesome they are, and what good values they have, while others are evil, devoid of values.

These phonies are braggarts, counterfeit Christians.

If people brag about their own goodness or imply that they’ve attained righteousness by being wonderful people, they’re probably not Christians.

Or, at the least, they’re Christians who need to repent for their sin and surrender their egos to Christ.

When Christians do brag, it’s about something else altogether. After Martin Luther died, a scrap of paper was found in his pocket, on which he had written six words: “We are beggars; this is true.” As Christians, we don’t brag about how wonderful we are. We know better. Our daily gaze in the face of God and into the mirror of God’s Law will tell us that. Instead, we brag about how wonderful God is!

We’re not braggarts, we’re beggars: completely, utterly, totally dependent on the crucified and risen Jesus to justify us, to make us righteous, fit for life with God. Like the prophet Isaiah (Isaiah 64:6), we can honestly confess: “All of us have become like one who is unclean, and all our righteous acts are like filthy rags...”

But we live with the joy of knowing that even when the devil, the world, and our sinful selves are forced to agree with the Law that, in our own power, we aren’t and never can be righteous, in the power of God, through the spent blood of Jesus on the cross and our faith in Him, we are justified, we are right with God, we are righteous!

And so, Paul writes elsewhere in Romans: “...there is now no condemnation for those who are in Christ Jesus…” (Romans 8:1) We’ve been set free from sin and death and condemnation. And set free, no longer under the thumb of the Law, we can focus on truly living as disciples: following Christ, drawing on the Holy Spirit’s power to love God as He has loved us and to love others as Christ has loved us.

In Christ, we are justified, we are righteous. That’s worth celebrating not just on the October Sunday closest to October 31, but every single day. Friends of Christ, happy Reformation Day!

Here is the audio of this message.
Posted by Mark Daniels at 7:55 PM No comments: