The God Who Runs to You

[This message was shared earlier today during the funeral service for Allen Johnson, the father of a member of Living Water Lutheran Church in Centerville, Ohio.]
Luke 15:11-32
I can recall meeting Allen Johnson just once, maybe twice. But I wish that circumstances had allowed me to get to know him.
After all, how often do you have the chance to get to know someone who designs satellite communications systems for the United States Air Force, who travels the world and writes books, who fences, hunts, and holds multiple advanced degrees, who holds patents and reads constantly, who takes pictures, runs marathons, and is a unicyclist, husband, father, and grandfather, not necessarily in that order? But I’m blessed to be with you today as we commit Allen to the God we know in Jesus Christ and take comfort and inspiration from the good news–the Gospel–that Jesus not only brings but the good news that Jesus is. For all of us. Even in the face of the death of whirlwind human beings we know and love, whether the whirlwind is a father, a grandfather, a relative, a friend, a coworker, a neighbor.

Jesus gives us that good news in today’s Gospel lesson, Luke 15:11-32. It’s a passage familiar to most people, even if they’ve rarely or never been in a church. It’s Jesus’ tale of the Prodigal Son. Charles Dickens called it the greatest short story ever told.

But of course, Jesus’ work of fiction is much more than just a short story. It’s a parable. That term comes to us from the language in which the New Testament was written, Greek. The prefix, para, means alongside. The second part is balos or baleo, meaning to throw. So a parable is a story that has a plotline and another story thrown in alongside it. Jesus told His parables to help those following Him to understand what it means to live under His loving reign.

As Jesus tells it, a man had two sons. Unlike most dads in first-century Judea where Jesus lived, this father planned to leave his two sons equal shares in his estate when he died. He didn’t play favorites, just as our heavenly Father loves all of us, including the people you and I can’t understand or can’t abide, with equal commitment and compassion.

But the younger son in Jesus’ parable doesn’t want to wait for his father to die and leave him his inheritance. Like many of us, he doesn’t do well with delayed gratification. Although the father in Jesus’ story would have had a good idea how things would turn out, he gives the inheritance to the youngest son and watches him head off to a faraway country.

Jesus says that once in that place far from his dad, the boy blows the entire inheritance. A famine hits and, broke and hungry, he takes a job with a local pig farmer. Of course, no pious Jew would want to have anything to do with pigs. For Jews, pigs were defiling. But things are so bad that this presumably Jewish boy in Jesus’ parable wishes he could eat the pigs’ feed.

It’s in this place of desperation that the boy thinks of his father, remembering that even his father’s minimum-wage servants had food to eat and places to stay. And though he’s sure that because of the impudence and disrespect he’s shown toward his father, not to mention the way he frittered away his inheritance, his dad will never call him “son” again, he thinks that maybe his dad will hire him on for one of those low-paying jobs. While the boy clearly has some sense of his dad being a charitable man, he still has no idea of how deeply his father loves him. We too often fail to recognize how deeply and completely God our Father loves us.

You know what happens next. The boy heads home rehearsing his speech: “Father, I have sinned against heaven and against you. I am no longer worthy to be called your son; make me like one of your hired servants.” (Luke 15:18-19) But while still some distance from his father’s house, dad spies the son, no doubt looking shabby and defeated, walking down the lane. This dad has every reason to be angry with this son. Nobody could blame him for thinking, “Look who’s come back to take advantage of me again. Look who, after he’s spent all my money, wants to come back.”

But the dad in Jesus’ story reacts very differently. In Biblical culture, it was thought undignified for an adult to run. In Biblical culture, it was thought undignified for an adult to run. Yet the hero of Jesus’ parable tears down the road, squeezes his lost son in a bear hug of welcome and forgiveness before the son even has the chance to recite his memorized line. Then, he throws a party and tells everyone, “...this son of mine was dead and is alive again; he was lost and is found.” (Luke 15:24)
Friends, the story that runs alongside the story of the father and his son, is good news for us.
It’s good news for you who mourn today.
God our Father doesn’t wait for us to clean up our acts or pay Him back for all the ways we’ve hurt Him or violated His holiness before He welcomes us into His kingdom.
Nor does He hold off for some “sweet by and by” moment to sweep us up into His arms.

Instead, God, like the father in Jesus’ parable, lays aside His dignity and the comforts of heaven and, in Jesus Christ, runs to us.
This is the God Who ran into our lives, not waiting for us to be perfect, gave Himself up on the cross for our eternal good. God’s Word tells us, “God demonstrates his own love for us in this: While we were still sinners, Christ died for us.” (Romans 5:8)
In Christ, comes to us in the midst of our grieving and our messiness, our sins, and our imperfections, then takes our sins and imperfections into His very body so that everything that separates us from God can be crucified and so that, all who turn from sin and turn to Christ, have everlasting life with God.
And, right here and now, He holds out His loving arms to all who, like the boy in the pig slop, understand their need of God for strength and new and everlasting life.

Today, I invite you, like the prodigal son, to fall into the arms of the God we know in Jesus Christ. He will give you comfort, eternal life with God, and the freedom to live with the dignity, peace, hope, and joy for which God made you, which Jesus died and rose to give freely to those who believe in Him.
“Come to me, all you who are weary and burdened, and I will give you rest,” Jesus tells us elsewhere in the New Testament. (Matthew 11:28)
May Jesus' rest and peace be with you today and in the days and years to come, and empower you to live in the freedom of the God Who loves you completely, unreservedly, eternally wants you to have.
It can be yours in Christ.
As Jesus tells us elsewhere: “For God so loved the world that he gave his one and only Son, that whoever believes in him shall not perish but have eternal life.” (John 3:16)
Jesus is tearing down the road to embrace you at this very moment. You can trust in Him. Amen 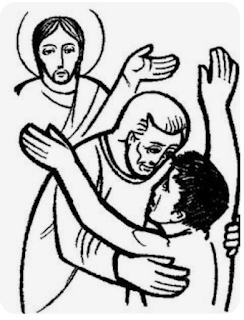 Posted by Mark Daniels at 10:17 PM No comments: