Posted by Mark Daniels at 10:26 PM No comments:

Posted by Mark Daniels at 10:18 PM No comments:

[Below is both the message from yesterday's worship with the people and friends of Living Water Lutheran Church in Centerville, Ohio and a video of the entire service. Have a good week. God bless you.]

Mark 10:46-52
The Gospel writers--Matthew, Mark, Luke, and John--tell us that Jesus, during His earthly ministry, brought sight to several blind people.
Jesus loved doing that. We can only speculate as to why.
One possible reason Jesus loved to give sight to the blind is that, despite the fact that God performed miraculous signs through them, no Old Testament prophet ever was used by God to restore sight to blinded people. By giving sight to the blind, Jesus was signaling to a disbelieving world that, in Him, they see far more than a prophet dependent on God. In Jesus, they see--we see--God Himself.

Another reason Jesus may have loved giving sight to blind people is that blindness is nearly impossible for medical science to overcome, especially among those born blind. The inborn underdevelopment of the optic nerve during pregnancy, called optic nerve hypoplasia, is one of the three top causes of visual impairment in children. It still cannot be cured. When Jesus restored sight to people blind from the womb, He rewired their bodies, demonstrating that, as God the Son, He has power over everything. The man whose sight Jesus restores in chapter 9 of John’s Gospel exults, “Nobody has ever heard of opening the eyes of a man born blind!” (John 9:32)

Of course, there’s another kind of blindness. Physical blindness is a result of the human condition of sin, not, as Jesus says elsewhere because the person born blind or struck blind has sinned and God is punishing them. God is no monster. The condition of sin, of alienation from God and from the life that only God can give though, is at the bottom of all our woes: sinful thoughts and actions, disease, deterioration, death, discord, war, greed, sexual immorality, and so on. The condition of sin into which we all are born is also the ultimate reason for what we might call spiritual blindness: an unwillingness to trust God as God, a desire to push ourselves forward while pushing others down, a hard-heartedness toward God and others.

Today’s Gospel lesson, Mark 10:46-52, comes at the end of a section of Mark’s gospel in which Jesus has spent a lot of time talking about what it means to be His disciple--one who trusts in and follows Him--and telling the disciples what’s going to happen to Him in Jerusalem. He will go to a cross for our sin there and be raised by the Father. Throughout the section, the disciples seem blind to what Jesus shows them. Told that in the Kingdom of God, the last will be first and the first will be last, the disciples still argue over which of them is the greatest, and James and John ask if they can’t be Jesus’ right-hand men, lording it over the rest of the disciples, once, as they think will happen, Jesus becomes an earthly king.

And then, outside of Jericho, heading for Jerusalem, Mark tells us: “As Jesus and his disciples, together with a large crowd, were leaving the city, a blind man, Bartimaeus (which means “son of Timaeus”), was sitting by the roadside begging.”

Earlier in Mark’s book, when a rich man came to Jesus asking about eternal life, Mark didn't mention the rich man’s name. But he names  Bartimaeus. The name means son of Timaeus or son of honor. We don’t associate being a beggar with honor. But in those days, if you weren’t able-bodied, you were expected to beg to earn your keep and the people of God were expected to give to any beggars they encountered. Still, beggars didn’t enjoy exalted social positions. But Mark takes the time to tell us the name of Bartimaeus for an important reason, I think: God knows your name. God cares about you as an individual. God is concerned for your concerns and needs!

You matter to God even when the world tries to tell you that you’re nobody. By faith, Bartimaeus saw, despite his low position, that he mattered to God. He knew too, could see better than others despite being blind, Who Jesus is. “Jesus, Son of David, have mercy on me!” Bartimaeus shouts. (Mark 10:47) It’s interesting what Bartimaeus says here. In the Greek in which Mark wrote his gospel, the phrase Bartimaeus uses is, “Kyrie, Elieson,” “Lord, have mercy,” a phrase that often comes up in our worship. When we cry for mercy from God, we’re asking for every good thing that God might give to us, asking God not to give us the bad we deserve as human beings. In crying out for mercy, Bartimaeus was saying, “I’m no better than the rest of the human race, Lord. I’m a sinner. But, Jesus, I see that You are good. Help me!”

What happens next is predictable, I suppose. Often, when I ask God for His mercy, certain of His goodness and love, it seems that the devil, the world, and my sinful self are quick to say, “Be quiet, Mark! Who are you to ask for the help of the perfect God of the universe?” That’s what happens to Bartimaeus. The crowd around Jesus condemns him and tells him to be quiet. A sinful world and the sin inside of us want to tell us when we think to approach the God we know in Jesus for mercy, “Stay in your place! You’re not important enough, rich enough, powerful enough, learned enough, beautiful enough to bother God.” But Bartimaeus, despite his blindness, sees Jesus through the eyes of faith. So, he shouts out again, “Son of David [a title reflecting Bartimaeus’ awareness that Jesus is the Messiah], have mercy on me!” (Mark 10:48)

Jesus instructs His disciples to call Bartimaeus to Him and then asks the blind man, “What do you want me to do for you?” (Mark 10:51) Is that not the most remarkable question imaginable! Here’s Jesus, God in the flesh, on His way to suffering and the cross. But He stops for a nobody that the world wants to hush and asks, “What do you want me to do for you?” A woman once told me, “I never ask God for things. I suppose He has plenty of other things to do.” She was like the crowd around Bartimaeus. They thought that Jesus was too great to be bothered with Bartimaeus. But Bartimaeus sees that because of Jesus’ divine and perfect greatness, He’s willing to stop everything to hear everyone’s cry for mercy: from that of the tiniest child with her bedtime prayers to the most celebrated billionaire in need of God’s forgiveness.

Bartimaeus tells Jesus, ““Rabbi, I want to see.” (Mark 10:51) When giving sight to blind people elsewhere, Jesus did things like make mud with His spittle and put the compound on their eyes. With another, He pressed His fingers onto the blind person’s eyes. But here we’re told: “‘Go,’ said Jesus, ‘your faith has healed you.’ Immediately he received his sight and followed Jesus along the road.” (Mark 10:52) Without flash, pop, or even a press release, Jesus acceded to the request of a blind man who already saw clearly with eyes of faith that Jesus is our God and Savior!

We know that God doesn’t answer all of our prayers exactly the way we would like. As I reminded the church council this past week, if miracles were constant, we wouldn’t call them miracles; we would call them ordinaries. But through the eyes of faith in the crucified and risen Jesus, we, like Bartimaeus, can see something very clearly: God intends that the last word over our lives won’t be sin or death. God means for the last word He speaks over us while we live and when we die is this: His mercy. The healing of Bartimaeus and Jesus’ death on the cross shake us from our spiritual blindness and make us see that to all who trust in Jesus, His mercy will always and eternally more than meet our need; His grace will trump our sin; His resurrection will overcome our death. Before he ever saw Jesus, Bartimaeus believed in Jesus. May we, before that day when we encounter Him face to face in eternity, see Jesus with the eyes of faith too. Amen 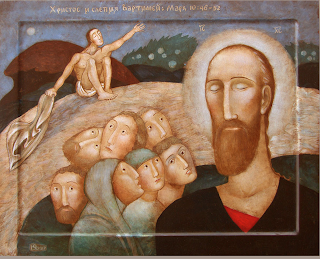 [The painting, Christ and Bartimaeus (Mark 10:46-52), is by the Bulgarian artist, Julia Stankova. You can view a gallery of her work here.]

Posted by Mark Daniels at 10:13 AM No comments: