Tonight's Weeknight Bible Study of the Gospel of Matthew, Chapter 20

Posted by Mark Daniels at 9:59 PM No comments:

Email ThisBlogThis!Share to TwitterShare to FacebookShare to Pinterest
Labels: cup of wrath, faith is seeing, Matthew 20, Passion of Christ, servanthood, The Cross

Tonight's Weeknight Bible Study of the Gospel of Matthew, Chapter 19

Are You Ready to Grow Smaller?

[This piece, originally posted earlier this evening on Facebook, is inspired by Matthew, chapter 18.]
When God came into the world to save us from ourselves, He didn't overpower us. He didn't make war. He didn't go into politics. He didn't establish a financial empire. Those, He knows, are all the ways of death, the ways of people who wrongly believe that this world can offer us freedom or salvation or meaning.

In Jesus of Nazareth, God became a sinless servant who died on a cross at the hands of every human being. That was His plan...and because of our darkened minds, we played right into His nail-pierced hands.

The God we know in Jesus always chooses what the world sees as weak, insignificant, and small to accomplish His purposes.

He doesn't do it through military conquest.

Nor through political power.

Nor with big bucks.

And He absolutely doesn't do it through preachers who promise unrepentant people success and prosperity.

Instead, God uses every believer in Christ who, convicted of their own need of Christ, call others to repentance and the faith in Jesus that alone can save us from sin, death, and darkness.

A dying world still tells us the lie that we can conquer all if we get bigger and stronger.

But freedom from all that kills and destroys us only comes to those who to the small, disdained way of trusting in Jesus to do for us all that we clearly cannot do for ourselves.

Our call from the God revealed in Jesus isn't to grow up to be big and strong, or independent and self-sufficient, but to become little children who trust in Christ alone.

The phenomenal song linked below, written by the late Mark Heard, and performed by the late Rich Mullins, is a reminder of the stupid futility of pushing ourselves to the top when real life is found in surrender to God's grace, His charity.

It's time for us grow down, to descend to true greatness, becoming children at the feet of the One Who has torn eternity open for all His little children. Are you ready to get small?

Posted by Mark Daniels at 10:07 PM No comments:

Email ThisBlogThis!Share to TwitterShare to FacebookShare to Pinterest
Labels: greatness, little ones, Matthew 18

Tonight's Weeknight Bible Study of the Gospel of Matthew, Chapter 18

Posted by Mark Daniels at 9:51 PM No comments:

Tonight's Weeknight Bible Study of the Gospel of Matthew, Chapter 17

Posted by Mark Daniels at 9:52 PM No comments:

Posted by Mark Daniels at 12:17 PM No comments:

Tonight's Weeknight Bible Study of the Gospel of Matthew, Chapter 16

Posted by Mark Daniels at 10:11 PM No comments:

Email ThisBlogThis!Share to TwitterShare to FacebookShare to Pinterest
Labels: demonic, faith, Kingdom of Heaven, Matthew 16, Passion of Christ, temptation, The Kingdoms of the World 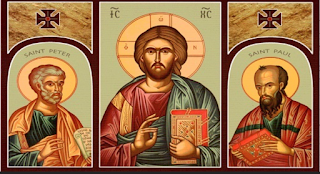 They cast their nets in Galilee,
Just off the hills of brown;
Such happy, simple fisherfolk,
Before the Lord came down,
Before the Lord came down.
Contented, peaceful fishermen,
Before they ever knew
The peace of God that filled their hearts
Brimful, and broke them too,
Brimful, and broke them too.
Young John, who trimmed the flapping sail,
Homeless in Patmos died.
Peter, who hauled the teeming net,
Head-down was crucified,
Head-down was crucified.
The peace of God, it is no peace.
But strife closed within the sod.
Yet, let us pray for but one thing:
The marv'lous peace of God,
The marv'lous peace of God.

© William A. Percy, 1885-1942
Peter reminds me to embrace an enduring faith. Jesus says, "The one who stands firm to the end will be saved." (Matthew 24:13) Thank God!
Here is Malcolm Guite's beautiful poem for Saint Peter.

Posted by Mark Daniels at 2:08 PM No comments:

Call Me Back Again by Paul McCartney and Wings

Posted by Mark Daniels at 2:01 AM No comments: