Another Unanswerable What If?: Would JFK Have Won in 1964 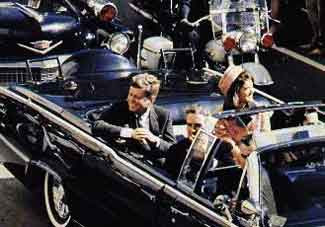 Someone in this discussion over at Althouse's blog said that had he not been assassinated on November 22, 1963, President John Kennedy wouldn't have been re-elected in 1964. I disagreed:

...The what-ifs are usually avoided by historians. However, several facts lead me to conclude that he would have been re-elected.

First, at the time of Kennedy's death, Barry Goldwater was the presumptive nominee of the GOP and all the polling had Kennedy way ahead of him.

Second, before sunny Ronald Reagan made conservatism acceptable to the mainstream (and before the Democrats' big government philosophy brought the war in Vietnam and enormous deficits that brought seemingly no solution to our broiling social ills), Goldwater and all conservatives of his stripe were regarded as dangerous radicals.

I remember that my parents and grandparents were big Goldwater supporters in 1964. But when we shared this with our Republican family and friends, they were all shocked. They were voting for Johnson, deeming Goldwater to be what some would today call a RINO...because he was too conservative.

If you read Theodore White's account of the '64 campaign, you see the reason Goldwater won the Republican nomination: His troops were more well-organized than anybody out there. The organizational skills his backers developed that year later allowed them to take over the Republican Party.

But most Republicans and most Republican leaders were so put off by Goldwater that when he had to nominate someone from the mainstream of the party to be his Veep candidate, the only person willing to do the job was William Miller.

Miller was a Congressman from NY and a former GOP national chairman. But in spite of that, he was no heavy hitter. Years later, he did one of those American Express, "Do you know me?" commercials, trading on his obscurity.

The Goldwater candidacy would have been in trouble in 1964 whether JFK had lived or not. He was considered out of the GOP mainstream and dangerous by the general public.

Third, JFK had a high approval rating at the time of his death. While those sorts of things change--think of Bush the Elder after the first Gulf War, Kennedy's popularity wasn't the result of a war, which always provides leaders with approval that is ephemeral. (Churchill was turned out of power after winning the second World War and Truman's 1948 post-war victory was a miracle resulting from the arrogance and complacency of Tom Dewey and his handlers.)

The fundamental point is that all the lights were green for Kennedy to win in 1964.

Of course, the great historical what ifs of a Kennedy second term are twofold:
By 1964, even for Johnson, the war in Vietnam was not yet an issue. Goldwater's assertion that we should be more aggressive, involving the deployment of more troops--not unlike what Goldwater's Arizona philosophical heir, John McCain, is saying today about Iraq--fell on deaf ears. Criticisms of the war on poverty had more legs among voters in 1964. But not enough to sway them to vote for Goldwater.

JFK would not have likely won by as big a margin over Goldwater in 1964 as LBJ did. There clearly was something of eulogy in the vote for Kennedy's successor.

But Kennedy would not have required what until that point, was the most lopsided presidential win in history to have been returned to the White House. (Goldwater carried Arizona and five southern states, losing the popular vote by something like [43]-million to 24-million.) Given the political climate of that time, it's hard to figure what other states Goldwater might have picked up, although the raw popular vote would probably not have been so lopsided [had he run against JFK and Dallas hadn't happened].

I think you're exactly right, Mark. Goldwater seemed old, stern and hawkish. Kennedy was young, personable and considered. Goldwater scared people at a time when they were already scared of the Russians and Chinese. He seemed like someone who might just start a war (remember the famous A-bomb commercial?), where Kennedy had shown himself to be tough but not impetuous with the Russians over Cuba.

Goldwater had the support of the Republican machine, but not the base. I don't see how Goldwater could have done much better against Kennedy than he did against Johnson.

No candidate that the establishment tried to get behind could stop him from taking the GOP nomination.

Nelson Rockefeller was wounded from his unseemly marital break-up and quick re-marriage. (Remember that until Reagan, we had never had a divorced President.)

Henry Cabot Lodge (the son of the famed friend of Theodore Roosevelt and ardent opponent of the League of Nations) won the New Hampshire primary. He was a sentimental favorite there, both because he was from neighboring Massachusetts and because he had many friends in the state from his organization of the movement to draft Eisenhower for president in '52. But his campaign never gained traction.

And Bill Scranton, the Pennsylvania governor, maybe the most viable of GOP establishment figures to vie for the nomination that year, entered the race only after it became clear that Rockefeller couldn't win. By then, it was too late to stand up to the momentum Goldwater had developed.

Goldwater out-organized everybody else and the moderates he excoriated in his nominating acceptance speech never got their acts together.

But his immoderate rhetoric and campaign put off the party regulars and the rest of the country. That likely would have happened whoever his 1964 Democratic opponent might have been.

Thanks for your reading the blog, Charlie, and for your kind comments.

Uh, I think you're slightly confused about who exploded the deficit. Hint: it was Reagan.