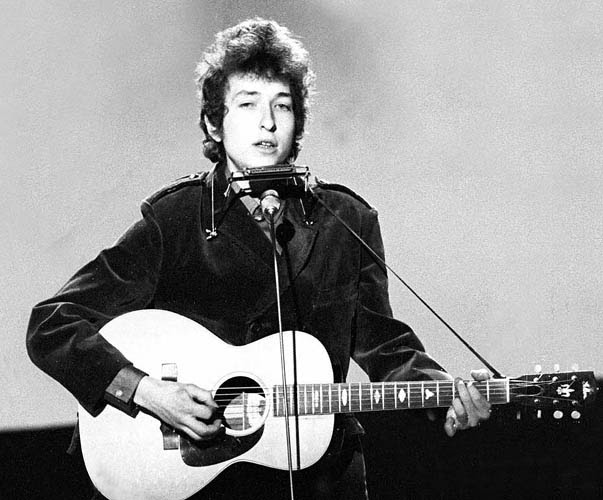 Highly dependent on the Martin Scorsese documentary of last year, one of the highlights of our visit to the Rock and Roll Hall of Fame was Bob Dylan's American Journey, 1956-1966. Clips from the documentary can be seen interspersed throughout much of the two-story exhibition, which will end its run at the Cleveland museum in just four more days.

For those who, for the first time, want to familiarize themselves with Dylan's work or for established fans like myself, two different elements will be of interest. For the first group, a series of listening booths in which you can hear every cut of every Dylan LP of this period, with excellent sound systems, will be a welcome introduction. For the latter group, sitting in a beautiful theater with great acoustics, is the perfect place to watch a seemingly endless loop of Dylan performances from the period, some of which I had never seen before. Included is an unusually accessible performance of Girl of the North Country.

I'm hoping that at some point in the future, the Hall will give similar treatment to the subsequent period of Dylan's career. It was in the 1970s that he produced albums which were less political, more personal and poignant. Blood on the Tracks, from this period, is my pick for Dylan's very best LP and it comes from this period. The title itself is evocative of the pain and wistfulness of one who has lost at love evident on every tract of the album.
Posted by Mark Daniels at 9:29 PM