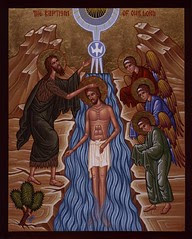 The Bible Lesson: Luke 3:15-17, 21-22
15As the people were filled with expectation, and all were questioning in their hearts concerning John, whether he might be the Messiah, 16John answered all of them by saying, “I baptize you with water; but one who is more powerful than I is coming; I am not worthy to untie the thong of his sandals. He will baptize you with the Holy Spirit and fire. 17His winnowing fork is in his hand, to clear his threshing floor and to gather the wheat into his granary; but the chaff he will burn with unquenchable fire.”

21Now when all the people were baptized, and when Jesus also had been baptized and was praying, the heaven was opened, 22and the Holy Spirit descended upon him in bodily form like a dove. And a voice came from heaven, “You are my Son, the Beloved; with you I am well pleased.”

General Comments
1. We saw some of the verses that comprise this lesson just a few weeks ago. (See here and here.) That was on the Third Weekend of the Advent Season. Advent, as you'll recall, is the season of spiritual preparation...for the Christmas celebration of Jesus' birth and for meeting Jesus, whether in our daily lives, the ends of our lives, and the end of history.

The Gospel lessons for the second and third weekends of Advent each year deal with the ministry of John the Baptizer. John's ministry entailed preparing the people of Judea for the revelation of God's Anointed (Messiah means Anointed), Jesus.

2. This year's Christmas season ends with Epiphany Day, which happens on January 6. That's the day on which Christians have traditionally celebrated the arrival of the wise men (the magi) mentioned in Matthew's narrative of Jesus' birth. You'll remember that they followed a star to the house in Bethlehem to which Joseph, Mary, and the child Jesus had briefly moved after the Savior was born.

The word Epiphany means shine upon. Of course, the star shone upon the world to announce the birth of Jesus. But more significant than the light of the star is how it revealed Jesus to be God in the flesh.

Epiphany Day kicks off a season in which the Gospel lessons appointed for each weekend deal with the events which revealed who Jesus was and is. The First Weekend after Epiphany's Gospel lesson always deals with the Baptism of Jesus by John the Baptizer.

3. Interestingly, in Luke's Gospel, from which our lesson comes, there's no actual narration of Jesus' baptism. I hope to talk more about the peculiarities of Luke's telling of the story of Jesus' baptism tomorrow.

4. For some basic information on Luke's Gospel, see here.
Posted by Mark Daniels at 10:43 PM