I was in a Virgin Records Store earlier this week. (It's a place through which I sometimes peruse, although I can't remember ever buying anything there.) As I looked around, this CD cover caught my eye: 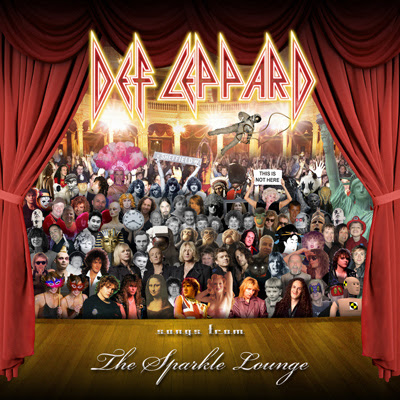 Imitation is, of course, if not the highest, one of the highest forms of flattery and obviously, this LP cover art from Def Leppard, a band I have managed to totally avoid through the years, pays homage to the Beatles. The Sparkle Lounge, I've since learned, was released in April of this year.

In case you don't know which Beatles LP it mimics (How have you managed to avoid the Beatles all these years and why would you want to?), here's the cover for their 1967 release, Sergeant Pepper's Lonely Hearts Club Band: 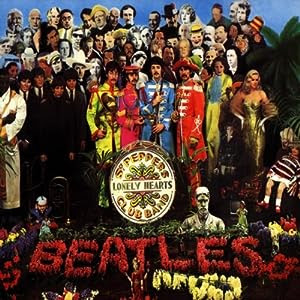 One of my favorite knock-offs of this landmark LP's cover was on the 1973 release by Beatle Ringo Starr. It looks like this: 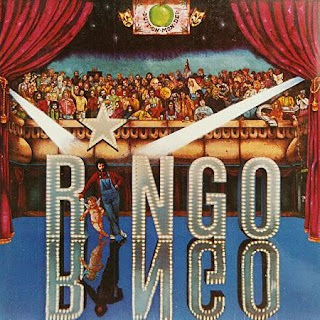 The Beatles always had a healthy sense of humor, concealing pride in their musical legacy beneath a willingness--most of the time--to deprecate and parody themselves. This was true of them from the beginning of their careers, when the Four Moptops appeared on a British variety show mocking their own then-signature, "Wooh!" while singing Moonlight Bay:

In later years, George Harrison appeared in the Eric Idle-created mockumentary, The Rutles.

But when it comes to LP covers, one of my favorite Beatles send-ups came from Beatle Paul McCartney. It mimics the cover that may be even more famous than that of Sergeant Pepper's: Abbey Road. Again, for those who've been living under large geological formations for all or parts of the last forty-five years, the original looks like this:

And here's Macca's send-up, a concert LP released in 1993, called Paul is Live:

The Paul is Live cover manages also to allude to at least two tidbits of Beatles lore. First, it hearkens back to the resilient rumor, which started in 1966 and was still going strong in some circles as late as 1970, that said that McCartney was dead. The Abbey Road cover was introduced as evidence for this assertion. (One probably believed by the same folks who think that UFOs are here from other planets, the Cubans or the Mafia killed Kennedy, and Milli Vanilli were talented.) The four Beatles crossing the street by the EMI studios where they'd recorded from the beginnings of their careers, were said to be forming an Indian funeral procession with Lennon as priest and Starr as undertaker. The bodies of the dead in India, we were told ominously, were always left shoeless in such processions. Note: Paul is barefooted! Harrison, in his jeans, was also said to represent lower-caste mourners for the departed. No, in fact, Macca was saying in 1993, "Paul is [a]live and performing live." (As he told Chris Farley in one of those wonderful faux talk shows Farley used to do on Saturday Night Live, "I wasn't really dead.")

On the 1993 cover, McCartney is being pulled along by an English sheep dog like the one he owned in the 1960s, a dog named Martha. Martha gave its name to the Beatles' 1968 tune, Martha My Dear.

Self-parody is the best way for celebs to inoculate themselves against others' putdowns and from the usually-plausible charge of taking themselves too seriously. (This was something George Harrison tried, to no avail, to teach Madonna and Sean Penn when he produced a movie in which the then-married couple starred for him.) JFK was a master of self-deprecating humor and the Beatles, who conquered America five months after Kennedy's assassination and who were not short on ego, have been as well.

I suppose that the real question about these and other parodies or all artistic imitation, for that matter, is why it happens. There are probably several reasons. One is that some works of art, whatever the idiom, are touchstones. They grab us by the lapels--assuming we have lapels--and won't let go. Musically, Sergeant Pepper's and Abbey Road did that, as did their cover art. Both were celebrated and are viewed as iconic.

Secondly, not everybody is as creative as the Beatles or the LP cover artists with whom they closely worked once Beatlemania hit. The Beatles' monstrous success allowed them to roam like kids in the candy shop through the entire musical process--production, arrangements, packaging. Before Beatles LPs like Revolver or Rubber Soul, album covers were fairly boring and predictable. The Beatles changed that.

But, of course, few can match the Beatles for creativity or the freedom accorded them by the suits. For four-and-a-half decades now the Fab Four have been imitated and parodied, but never matched.

[UPDATE: Go here to see something totally unnecessary: a live webcam transmission from the Abbey Road studios, now seventy-seven years old and still a site that attracts artists from around the world.]

This was a really fun and informative post. I've been stuck in computer labs all week doing research training, so this was a welcome treat. Thanks.

Slightly O/T:
Although they would be considered in bad taste a great deal of the time,
Beatallica is a hoot.