We had a Napoleon Dynamite Movie Night at the Saint Matthew youth group meeting this evening. If you've never seen it, it's a film so stupid that it's funny.

But, in many ways, it rings true to life in its portrayal of "in" people and those on the outs, the line between whose coolness and nerdiness, respectively, isn't as clear as the in-crowd may think. The movie, with its lovably quirky characters, really does say a lot about friendship.

After we watched the movie, there were two quick points I made with the kids who were able to be there this evening.

First: Judging others based on outward appearances may prevent us from befriending some really neat people, people who could be loyal friends. The Bible says, "...The Lord does not see as mortals see; they look on the outward appearance, but the Lord looks on the heart" (1 Samuel 16:7). We need to ask God to help us see others as God sees them.

Second: Even when we feel friendless, we aren't. For one thing, we probably do have friends--trusted people with whom we can talk--even when we don't feel like we do. Proverbs 18:24 says, "Friends come and friends go, but a true friend sticks by you like family." The truest Friend we have is Jesus, Who says that all who believe in Him are His friends. Jesus is available to speak with us every moment, every day.

We took a short intermission to enjoy pizza. Yum!

Everyone was encouraged to dress as one of the characters in the film. Here are some pictures. 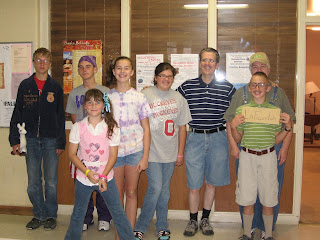 We had a Napoleon, a Rex Kwondo, two Debs, two Kips, and, playing Lyle, my wife Ann. 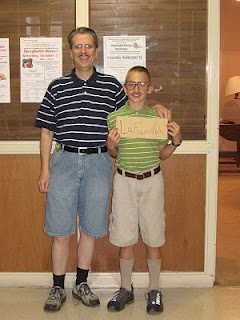 Here are two Kips (Isaac and me) waiting for LaFaunduh.
Posted by Mark Daniels at 9:26 PM

I'm sorry. I vote for Isaac. He wins the Kip look-a-like contest!!!

I think you're right, Carol.

Isaac's mustache was definitely better than mine.