Called to Obedience...Even When It's Inconvenient

[This was shared during worship with the people of Saint Matthew Lutheran Church in Logan, Ohio, earlier today.]

It all started after Jill’s marriage ended. There she was, a single mom with a mortgage. Shortly thereafter, she lost her business.

Fortunately, she was able to get another job. But it was100% commission and she wondered how she was going to make it as she built up clientele and referrals.

In the midst of this turmoil, it struck Jill that it had been awhile since she had given God much thought. She went to a worship service one Sunday and heard the preacher challenge the congregation to consider tithing. The Bible speaks of believers giving 10% from the tops of their paychecks. That’s a tithe.

The pastor challenged the congregation with God’s words to the people of Israel in the Old Testament book of Malachi: “Bring the full tithe into the storehouse, so that there may be food in my house, and thus put me to the test, says the Lord of hosts; see if I will not open the windows of heaven for you and pour down for you an overflowing blessing.”

Jill had no idea what sorts of blessings God might have in mind for her and her child, but as she prayerfully considered those words, she decided that this was as good a time as any to put God first.

She realized that the Christian isn’t required to give a specified amount in offering to God. Jesus wants our whole lives, not just 10%, after all. But Jill felt that her tithe would be one way she would keep the first commandment, “You shall have no other gods before me” and the first part of Jesus’ Great Commandment, “You shall love the Lord your God with your heart, and with all your soul, and with all your mind.”

Jill remembered God’s past blessings and above all, the blessing of new life that belongs to all who turn from sin and believe in Jesus Christ as God, Savior, and Lord over their lives. Jill felt that these past blessings were good reason to trust God now. The following Friday, Jill received her paycheck. It was next to nothing. But on Saturday, she wrote a check equaling 10% of her skimpy pay for her offering.

Over time, Jill’s financial situation improved. Eventually, she joined our former congregation. On the first Sunday that she visited with us, Jill heard me say during the service, “If you are a first-time visitor, you’re not expected to make an offering; it’s our privilege to worship with you today.” When Jill heard that, she later told us, she thought, “There is no way you can keep me from giving my tithe, buddy!” Jill remembered God’s past faithfulness, even in a hard time, and, determined to obey His call in her life, her relationship with God was strengthened and deepened.

This is not a sermon about money. It’s about something else.

We Lutherans believe that justification by grace through faith—the salvation of sinners from sin and death through what Christ has done for us and through our faith in Christ—is the central doctrine of Biblical faith. But we also believe that it’s not the only doctrine of our faith.

We also confess that all who believe in Jesus are called to obedience to the will of God the Father, Son, and Holy Spirit. That also is a doctrine of Biblical faith. Martin Luther wrote: “When our Lord Jesus Christ said, Repent!, he meant for the whole life of the believer to be one of repentance.”

Repentance, you know, is more than mere sorrow for sin, it’s a constant turning to God in faith and in obedience to God’s will. We are to always hold our lives up for examination in the light of the Ten Commandments and seek forgiveness and the amendment of our lives through Christ. Obedience to God, however imperfectly rendered by we human beings, is the proper response to a life transformed by the grace and goodness of God, given to us through Jesus Christ...even when it’s inconvenient.

The same God Who claims us in Holy Baptism had saved His ancient people, the Hebrews or Israelites, when He led them through the waters of the sea and sent those same waters to drown the armies of Egypt, their one-time captor nation. Our first lesson, from Exodus, finds the Hebrews in the midst of their forty-year journey through the wilderness, heading to the land God had promised to their ancestor Abraham.

Please pull out the Celebrate insert and look at the first lesson. Read verse 1 with me silently, please:


From the wilderness of Sin the whole congregation of the Israelites journeyed by stages, as the Lord commanded. They camped at Rephidim, but there was no water for the people to drink.

Now, the wilderness of Sin has nothing to do with sinfulness. “Sin” here is just a word related to “Sinai, S-i-n-a-i,” a name for the entire region through which the Hebrews were traveling.

We’re told that the people were moving by stages, in the orderly fashion commanded by God. The place God commanded them to go had no drinking water.

Had they stopped and thought, they might have remembered...
But, like all of us sometimes facing life’s wilderness experiences, the Hebrews forgot God and His past help.

I once heard a speaker ask a group of us, “What was the thing you were most worried about one year ago? Five years ago? Ten years ago?” All of us were hard pressed to remember the answers to any of those questions. The point: The God Who has helped you through past difficulties is capable of doing the same thing for you in today’s wilderness. God is still in the blessing business; we shouldn’t allow panic, worry, or challenges cause us to forget that!


The people quarreled with Moses, and said, "Give us water to drink." Moses said to them, "Why do you quarrel with me? Why do you test the Lord?”

The Hebrews seemed to operate under the assumption that God would only allow easy times to accompany them through the wilderness. They couldn't imagine now that God had delivered them from Egypt He would ever allow any bad or difficult times come to them.

We can entertain similar thoughts. But that’s “magical thinking,” not real life faith. If God the Father didn’t insulate God the Son from the cross, what makes us think that any of us will be insulated from the realities of life—from the wilderness—in a fallen world?

The good news though, is that the God Who has conquered sin and death through the cross and Christ’s empty tomb gives all who trust in Him strength for our journeys through life and the certain hope of eternity with God!


But the people thirsted there for water; and the people complained against Moses and said, "Why did you bring us out of Egypt, to kill us and our children and livestock with thirst?" So Moses cried out to the Lord, "What shall I do with this people? They are almost ready to stone me.”

Look at Moses’ prayer and see how self-absorbed it is: “What shall I do…?” “They are almost ready to stone me.”

Moses here seems to forget that it’s God Who has freed and provided for His people in the wilderness, not him.  God is the shepherd; Moses is only God's imperfect human underling.

Moses suffers from the common workaholic tendency to think that the fate of the entire universe depends on him. (Believe me, I know what I’m talking about!)

Moses forgot that God is God and that he wasn’t. This is why our psalm for today says that Moses and his generation weren’t allowed to enter the promised land. Disobedience has its consequences even when we are repentant and God forgives us our sins. (I know about this, too. Even though I know God loves me and in Christ my sins are forgiven, I suffered a heart attack last summer, caused by my making the same mistake that Moses made, forgetting that God is God and I'm not! Even forgiven sinners must sometimes wrestle with the consequences of their sin.)


The Lord said to Moses, "Go on ahead of the people, and take some of the elders of Israel with you; take in your hand the staff with which you struck the Nile, and go. I will be standing there in front of you on the rock at Horeb. Strike the rock, and water will come out of it, so that the people may drink."

The message God gave by telling Moses to use his staff could not have been clearer. This was the same staff that God told Moses to use to turn the waters of Egypt blood red and undrinkable in one of the plagues God used to force Egypt’s king, the Pharaoh, to let His people go.

God was reminding Moses and the people of Israel that, no matter the crisis, His power was undiminished. He could provide for His people.

Water is still known to run through lime deposits in the Sinai Peninsula today. But in bringing water from this rock in Sinai, the Creator of the universe bent creation itself to His purposes for His people. The God Who raised His Son from the dead to give life to all who believe in Christ can do similar things for those who trust and obey Him today.


[Moses] called the place Massah and Meribah, because the Israelites quarreled and tested the Lord, saying, "Is the Lord among us or not?”

Moses gave two names to the place. Massah means test. God had tested the Hebrews faith and the Hebrews had, contrary to God’s commandment, put God to the test. Meribah is translated as quarrel. But it has a more specific meaning; it’s the word used when a plaintiff sues someone else in court. The people thought they were bringing suit against Moses, but really their beef had been with God. Their question was, “Is the Lord among us or not?”

We may be tempted to ask that same question at times. I'll never forget a Saturday afternoon in my first parish when I was called to a hospital in Toledo, where a member of the congregation had been life-flighted. While using a torch to cut a barrel in half for some neighbor boys, the barrel had exploded and crashed into his skull. When I arrived at the ER, he looked like someone who had been through a battle. The doctors said that his prognosis was hopeless. His mother, a wonderfully faithful woman who had endured the deaths of her husband and a grown child already, kept asking of this calamity that had befallen this son, the father of small children, "How could God have let this happen?" Where had God been? she wondered. We've all been in that wilderness!*

But, as our Gospel lesson reminds us, the God Who caused water to spring from a rock in the wilderness has come in Jesus Christ, the Word made flesh, to be the living water from heaven!

Jesus refreshes and makes new the thirsty souls of all who trust in Him and live lives of repentance and obedience to Him.

May we turn each day to Jesus, even in the inconvenient wilderness times of our lives, and live! Amen

*I'm happy to report that the man in question not only survived, thanks to the prayers of many, but is strong and well to this day! 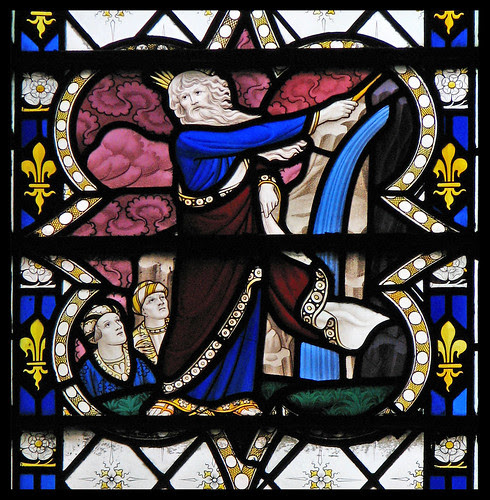