Let's Go to the Short North!

No appointments, no obligations today! What should we do? Let's go to the Short North in Columbus, walk around, and find a nice place to eat. Sounds good! 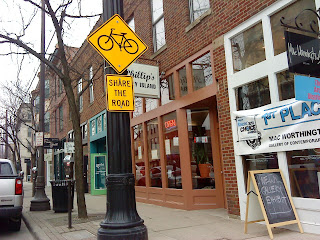 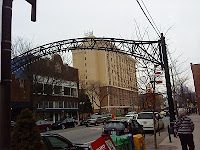 And be sure to admire the varied cityscape on North High Street.


Stop to learn a little about Alice Schille. (More here.) 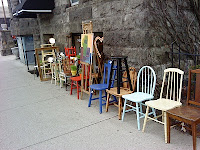 Notice the randomly artistic display of merchandise in front of a little shop housed in the basement of the Greystone, an old apartment complex that at one point was quite seedy, but now, I think, is tony. 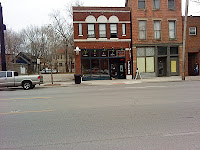 Wonder if anyone eats a falafel while getting a tattoo there?


Take a look at all the neat old stuff a person could buy at GrandView Mercantile. (See here.) Have you ever noticed how stores in re-gentrified areas never call themselves "stores"? They're always called things like "mercantile," or "emporium," or "bazaar." What's wrong with calling a store a store? Am I wrong, or do those other names sound pretentious? (Am I starting to write like Andy Rooney talks? I hope not, because honestly, when we watch '60 Minutes,' we always mute the sound. Or, we may hear the first few sentences of his spiel, turn to each other and say, "He's got a sweet gig," which is our way of saying, "For these inanities, Andy is paid a handsome salary." OK, I feel better now. Back to our tour.) 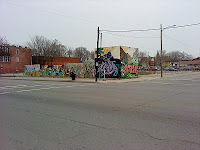 Be sure to admire some local graffiti. 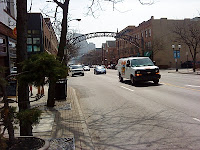 Look south on High Street toward downtown. See the Nationwide Insurance office tower? It looks like a giant walkie-talkie. I don't know if it's still there or not, but when the Nationwide building was first opened back in the late-1970s, one of the upper floors incorporated the boyhood home of its one-time chief honcho, Dean Jeffers. I guess it was sort of the Nationwide Insurance version of a US presidential library. But to those on the outside, it always seemed a little odd. Nationwide used to be called the Farm Bureau. I don't know if they were on your side back then or not. (Help me, I am turning into Andy Rooney!) 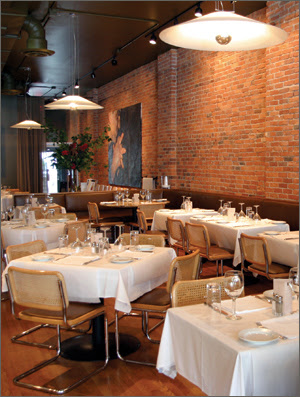 Eat at a place called Rigsby's Kitchen. (I didn't take this picture, which you probably can tell, because it's in focus.) I'd never heard of Rigsby's before today, although it's been there since 1985, the year after we moved from Columbus to northwestern Ohio. My mother-in-law said it was a good place and she was right. I had something I'd never eaten before, Faro Risotto. It was excellent! You can read reviews of the place here.

Who's that at the next table? Oh, yeah, it's Yvette McGee Brown, who ran on Ted Strickland's ticket for Lieutenant Governor last year and now serves on the Ohio Supreme Court. I won't snap her picture, just let her eat her meal and converse with her luncheon companion in peace.

Leave the restaurant, having enjoyed the food and each other's company.

Oh look! Paul Palnik's shop is open. Let's go see if Paul is in. Ann and I got to know Paul thirty years ago when he worked in a program for the Greater Columbus Arts Council with which Ann worked in those days, the Artists-in-the-Schools program. Local artists of all sorts were booked into local schools for varying periods to provide young people with insight into what's really involved in creating art, whether painting, sculpture, dance, architecture, music, poetry, whatever. Paul is a great cartoonist!

While there, we listened to the latest CD by his son, Elijah Aaron. (You can find his music on iTunes.) "He's a good boy!" Paul told us proudly. We're the parents of a good boy and a good girl ourselves; so, we appreciate his pride. I bought a copy of Elijah's CD. I love it that the children of old friends are making wonderful music these days. (Tim Skipper, the son of high school friends, sings, plays, and composes in a great band called House of Heroes. That band is on iTuunes, too.)

As we left, Paul told us, "May God bless you in every possible way He can bless you!" It was a beautiful benediction to our foray to the Short North. 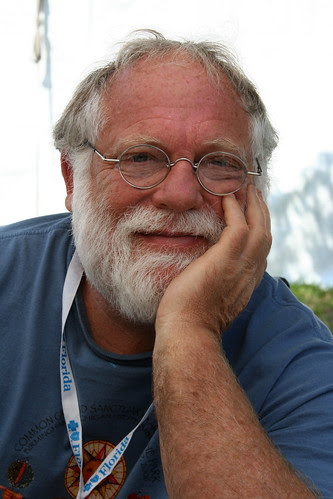 [I didn't take this picture of Paul either.] 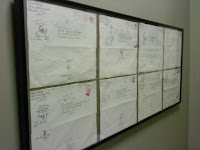 When Ann worked at the Arts Council, she saved some of the envelopes in which Paul sent the vouchers for his work with the Artists-in-the-Schools program. Later, she had them framed and we have them on display in our house.

Maybe if you go to the Short North, you can have a nice day too. And, may God bless you in every possible way He can bless you!"

[You can click enlarge any of the photographs here.]

Email ThisBlogThis!Share to TwitterShare to FacebookShare to Pinterest
Labels: Am I turning into Andy Rooney, Columbus, Elijah Aaron, food, House of Heroes, Is Nationwide on Your Side, Miscellany, Paul Palnik, Short North, Yvette McGee Brown