To begin this morning, a personal word. I’m not exaggerating when I say that I would have no joy in this life and no hope for eternity were it not for the witness of Lutheran Christianity.

Baptized in an evangelical Friends church, confirmed in a United Methodist congregation, I know that I had many times heard the good news--the gospel--of Jesus Christ, that God so loved the world that He sent Jesus to die and rise so that all who turn from sin and believe in Him will have life with God for eternity. But the message never took with me and following a decade of youthful atheism, it was only after I’d heard and experienced the Lutheran understanding of the Gospel that I could say with firm and informed conviction, “I believe in God the Father...I believe in Jesus Christ, His only Son, our Lord...I believe in the Holy Spirit.”

So, the Lutheran witness for Christ is more precious to me than I can ever explain.

But what is a Lutheran?

It has never been more important for Lutherans to know the answer to that question than it is today.

This latter form of ignorance is the sadder because it means that no informed, loving person with faith in Christ has ever shared the message of Christ with them. Christians must be prepared always, in the words of 1 Peter 3:15, “to make your defense to anyone who demands from you an accounting for the hope that is in you.”

Jesus says, “The one who believes and is baptized will be saved; but the one who does not believe will be condemned.” If we have a scintilla of compassion for other human beings, we must know what we believe and why and be prepared to lovingly and respectfully share our belief.

But what does this have to do with being a specifically Lutheran Christian? Aren’t there other Christian churches?

Yes, there are other Christian churches and Lutherans have never been so arrogant as to say that we’re the only ones who have Biblical Christianity right.

But as we will see during the Sundays to come, Lutheran Christians have a particular understanding of Biblical Christian faith. Historically we have said, paraphrasing Martin Luther, “This is what we believe. But if you can show us by Scripture and plain reason based on Scripture that we are wrong, we will lay down our Lutheran confessions of faith and admit that we were wrong.” Otherwise our stance is, “Here we stand.”

We take our stand because the movement that began when that young monk Luther posted 95 theses on a church door on October 31, 1517, isn’t about petty, unimportant issues. It’s about life and death and eternity issues.

Get these issues wrong and there will be many people living without the joy that comes from having Christ in your life every day. Get these issues wrong and millions of people who might otherwise be reconciled to God through Christ will be separated from God for eternity. And these things will happen not because other Christian denominations and traditions aren't sharing the Gospel, but because there are lots of people like me in whom the Gospel never would have made a connection apart from the unique Lutheran witness for Christ.

That’s why what we’re about in the Church--trusting in, following, and sharing Jesus Christ--should be the most important thing in your life, whatever your job, whatever your station!

It’s especially important for us to know what it means to be Lutheran Christians today because, sadly, many in our own denomination seem intent on turning their backs on confessional Lutheran Christianity and taking us with them. We can’t let that happen!

The structure around which these sermons will be built is The Augsburg Confession. Christians, especially Lutheran Christians, have always been in the explaining business. We try to explain God to the outside world. We try to explain God to ourselves. We do that not because we think the Bible is deficient. The Bible is the inspired Word of God. And it conveys all the truth about God that a person needs to believe and live out faith in Jesus Christ.

But what do we believe about the Bible?

How do we understand what God is telling us in the histories, hymns, wisdom sayings, prophecies, apocalyptic visions, and teachings that make up the Bible?

And how do we then explain what we have come to understand of these things? 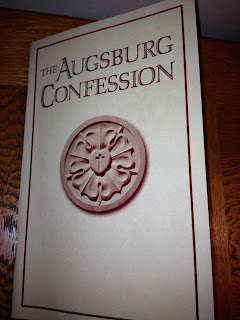 That’s where the Augsburg Confession comes in. You can, if you want, read the background of the confession that you’ll find in the front section of the tan and brown editions that are in all the pew racks this morning. The Augsburg Confession was written by Philipp Melanchthon in 1530 to explain what members of the evangelical movement (the good news movement), later called Lutherans, believed.

Lutherans have always included the Augsburg Confession in its Book of Concord, a set of statements of Christian faith that summarize what we Lutherans believe about the God of the Bible. In the constitutions of the ELCA, the Southern Ohio Synod, and Saint Matthew Lutheran Church, we say the same. There’s no better place to find the answer to the question, “What is a Lutheran Christian?” than to look to the Augsburg Confession.

Now, I had a road map all laid out for this series. I was going to cram all twenty-eight articles of the Augsburg Confession into ten weeks of preaching. But as I banged my head against the wall on this sermon the other day, I told Ann, “If I introduce the Confession and talk about two of its articles, I’ll end up with a fifty-page sermon.” “Then, slow it down,” she said. “Nobody cares if you take ten sermons or fifty, just as long as each one of them helps us in our faith.” I hate it when the Holy Spirit tells Ann what I should do! So, we’re going to slow things down. Understanding what it means to be a Lutheran Christian warrants taking things slow.

Please turn to page 11 in The Augsburg Confession and look at Article 1, God. It starts our: “Our churches [that is, our Lutheran churches] teach with common consent that the decree of the council of Nicaea [the council held in the 4th century in the Turkish city of Nicaea that produced the Nicene Creed] the unity of the divine essence and the three persons is true. It is to be believed without any doubt. God is one divine essence who is eternal, without a body, without parts, of infinite power, wisdom, and goodness. He is the maker and preserver of all things, visible and invisible...Yet there are three persons, the Father, the Son, and the Holy Spirit...These three persons are of the same essence and power...”

So, like other Christians, we Lutherans believe that there is one God in three Persons Who is Lord of all creation. The word Trinity, which describes this truth about God, never appears in the Bible. But the word trinity is a bag in which Biblical truth is carried. It’s just a shorthand way of describing what the Bible reveals to us about God. But where does the Bible tell us that God is one God in three persons?

Let’s start at the beginning. Turn to Genesis 1:26. God, the sole creator of the universe, says: “‘Let Us make man in our image, according to Our likeness...” Question: Who is God talking to? There is only one Creator of the universe and He’s talking to at least one other person about creating. This is our first indication that the one God Who creates is more than one person.

Flash forward to Genesis 18:1. Abraham and Sarah have been waiting many years for God to fulfill His promise of giving them a son through whom God would make them the parents of nations. “Then the Lord appeared to [Abraham] by the terebinth trees of Mamre, as he was sitting in the tent door in the heat of the day.” The Lord--a translation of God’s Name, Yahweh, which means I AM--appeared to Abraham. “So [Abraham] lifted his eyes and looked, and behold, three men were standing by him...” It would appear that when God showed up to meet Abraham face to face, Abraham saw God as three persons.

Now flash forward again, some 2100 years after the death of Abraham, to Jesus to learn more about this mystery. Look at John 8:58. Jesus tells a group questioning His authority: “Most assuredly, I say to you, before Abraham was, I AM.” Jesus is staking His claim that He is Yahweh, God. Yet this same Jesus also prays to God the Father, a hint that God can be three and yet also one.

Take a look at another passage, Matthew 28:19. Jesus knew and believed the words of Moses from Deuteronomy in the Old Testament: “Hear, O Israel: The Lord your God [Yahweh your God], the Lord is one” (Deuteronomy 6:4). He knew too that worship given to anyone other than God is idolatry, a violation of the first commandment. Yet, Jesus allowed people to worship Him. And, after rising from the dead, just before ascending to heaven, Jesus gives this commission to His Church: “Go therefore and make disciples of all nations, baptizing them in the Name of the Father, and of the Son, and of the Holy Spirit...”

Jesus puts both Himself and the Holy Spirit on the same level as God the Father. Anyone who would do this could rightly be regarded either as a horrible liar or a madman. Yet we know that Jesus was neither madman nor liar. The Bible teaches and Lutheran believe that there is one God in three persons.

So, we come to this familiar question: What does this mean?

Maybe the most important thing about the Trinity for us is that God, within the fellowship of Father, Son, and Holy Spirit, had all the fulfillment, love, and relationship any living being could want. God didn’t need to make the world. God didn’t need to make us. And God didn’t need all the grief and heartache we have caused Him by our rejection of Him and the hurt we cause to other people who, just like us, are made in the image of God. God doesn’t need to do any of these things. He doesn’t really need anybody else.

But God chose to give us life. God chose to become one of us in the person of Jesus Christ, to bear our sins on a cross, to die taking the execution for sin we deserve, then rose from the dead to tear open eternity to all who repent and believe in Jesus Christ.

God chooses to this day to give new life to all who trust in Christ.

God is filled with love!

His willingness to step outside of the sure comforts of perfect relationship He enjoys within the Trinity to reach out to us shows us just how loving this God--Father, Son, and Holy Spirit--truly is.

And that’s more than enough of God’s Word for us to know and soak up today...or any day, for that matter. Amen

[This was prepared to be shared during both worship services with the people of Saint Matthew Lutheran Church in Logan, Ohio, this morning.]