Who Are These "Celebrities"? 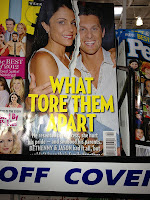 Saw this magazine cover while shopping today at Costco.

The cover says it has the scoop on, "What Tore Them Apart."

My first thought? "Who are they?"

I wasn't interested enough in learning who they are to do a Google search.

It just struck me what our celebrity culture has come to. Once upon a time, there were a few people who were celebrities: leaders in government and other institutions, a handful of entertainers, writers, and artists, and that was about it.

But with the explosion of the Internet, which came after the advent of five-million channels on cable and satellite TV, a media machine that eats and spits out "celebrities" at roughly the same rate at which your Toro cuts and discharges blades of grass, almost anyone can be a celebrity.

And Andy Warhol turns out to have grossly overestimated the shelf lives of instant celebrities; fifteen minutes takes many way past their expiration dates.

The consequence is, of course, that people's stars go by so quickly that many in this celebrity-craving culture miss them altogether.

I'm sorry that this couple experienced some sort of split.

But, if they're fortunate, they won't be celebrities much longer and they both can focus on being the one thing we should most want to be, actual human beings.