Another word for photoshopping: defamation

This is not a political rant. You can like President and Mrs. Obama or not like them. You can like Obama's policies and philosophy or not. I express no opinions on politics...except to family members and sometimes, friends, and in the voting booth. This post is not about any of that.

What it is about is the manipulation of imagery to misinform, stoke fires, generally get in the way of civil discourse, and defame people.

Yesterday, a friend who undoubtedly did not suspect manipulation on the part of the person who created the image he shared, posted this: 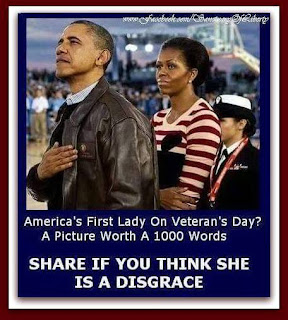 Frankly, to paraphrase Patrick Henry, "I smelt a rat."*

For one thing, I couldn't imagine Michelle Obama being so stupid as to play into the hands of those who think she's a radical whacko who hates the United States of America.

Her outfit was unique, one that she likely would have worn on only one patriotic occasion.

So, I googled "michelle obama Veterans Day." I found the image below, a still from the news story of a local ABC affiliate from Veterans Day, 2011. It was captured during the playing of the national anthem prior to the first NCAA Carrier Classic basketball game that day. As you can see from the jacket he's wearing below, even President Obama was photoshopped from a different event into the picture above. 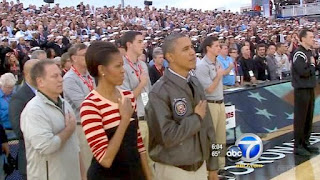 This is the full report from which the above still was taken:

The Obamas aren't the only victims of such nonsense, of course. It happens to all kinds of people: Republicans, Democrats, Christians, atheists, Muslims, white people, black people, brown people, yellow people.

But this kind of defamation is always wrong.

And it makes me think: If you have to resort to character assassination to make your point, maybe you don't have a point.

As a Christian, of course, I've been taught that God takes a dim view of defamation. It's a sin. The Eighth Commandment says: "You shall not bear false witness against your neighbor."

And as a Lutheran Christian, I'm privileged to be familiar with Martin Luther's explanation of that command from God: "We should fear and love God so that we do not betray, slander, lie, or gossip about our neighbors, but defend them, speak well of them, and put the most charitable construction on all that they do." Even when we disagree with our neighbor.

To the person who created this photoshopped image: You may doubt both Obamas' patriotism, but that doesn't warrant making up "facts" to buttress your doubts.

[By the way, I looked up the investigation of this meme on snopes.com after I wrote the above. It's here.]

*Henry was talking about the Constitution, and he was wrong in his gloomy assessment of the document, which completed America's Revolution, coupling the cause of liberty with the sustaining principle of mutual accountability.
Posted by Mark Daniels at 12:20 PM