Is Ryan Mendoza's 'The White House' a tribute to family connectedness and home...

Ryan Mendoza, a US artist living in Europe, has moved an entire repossessed and blighted home from Detroit, whitewashed it, and filled it with soft lighting and a projection of pictures of the family that once occupied the home and of his own family of origin. It's now on display as a piece of art in Europe. 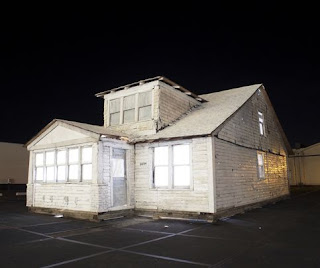 [Ryan Mendoza's The White House on display in Rotterdam.]

According to Mendoza, the purpose of the piece wasn't to make a work of art that trivializes Detroit's struggles. An article from USA Today says: "[Mendoza] hit on the idea of reclaiming a house, a symbol of familial legacy and protection, as a way of embracing his past rather than running away from it."

But some people feel that glossy photographs or exhibitions like Mendoza's are exploitative:


In a story appearing on the the website of the British newspaper the Guardian, Brian Doucet and Drew Philp wrote of the dangers of reducing Detroit to the single image of an abandoned or gutted home, implying that the city is empty and turning the ruins into objets d'art: "Collectively, the glossy photo books, websites and art projects all serve to produce and reinforce a simplistic narrative of Detroit as a blank slate, in need of white, middle-class saviors."

That doesn't appear to be part of Mendoza's motivation, but I understand the point.

The more basic question for some people might be, "Is this art?" But that's a question that people have been asking ever since the dadaists put things like bicycle wheels on display and called it art.

The thing that intrigues me about this piece, called The White House, is the way Mendoza has woven the sense of home he remembers from his childhood with the life of the Thomases, an African-American family who once owned the house.

Home can be a powerful anchor for us, especially in our growing-up years. One day when my son was in his twenties, he and I took a walk with my father through my childhood neighborhood, the neighborhood where my family and my grandparents both lived. It was a sunny day, a gentle breeze trembling the branches of the trees all along the street, the leaves making that hissing sound, rustling as I remembered them doing so often when I was a boy. I told my father and my son, "When I was coming home from school in the afternoon, walking down this street, I used to think to myself, 'This is the most perfect place on earth.'"

That sense of home, family, and safety, says Mendoza, is what he wanted to evoke, a universal yearning--if not a universal experience--that he surfaces by linking his own family's pictures with those of another clan he never previously knew.


"Truthfully, I wanted to repair [the house], but there was black mold and I couldn't afford to do it," he said. "I'm glad that somebody is doing something with it. But I hope something positive comes out of it for the city. That still needs to happen."

Amen! Detroit needs help and prayers. A once-great city still should have a shot at a great future. 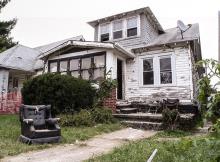 [The way the Thomas house looked before it was dismantled in Detroit and sent to Europe.]

Mendoza claims to be committed to that:


Mendoza hopes to have additional façades of Detroit houses sent to Europe, where he wants to auction them off and send the money back to Detroit for reinvestment in neighborhoods, helping city residents buy or upgrade homes.

That would be one wonderful way for Ryan Mendoza to reassure those skeptical about The White House. I hope that he can follow through on his plan.