How can a loving God send people to hell? (Tough Questions, Part 3) 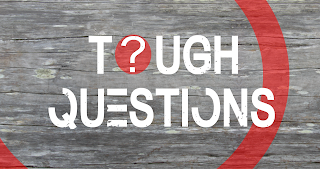 Of course, it doesn’t really matter what we think. There are simply some things in life that are facts, whether we like them or not.

Nonetheless, Christians and non-Christians alike wrestle with our tough question for tonight: How can a loving God send people to hell?

As Christians, we wrestle with it, of course, because the entire record of God’s self-disclosure as found in Scripture and as seen in Jesus, supports the assertion of 1 John 4:8: “God is love.”

The creation of which you and I are a part argues that God is loving. This universe is, when you think about it, completely unnecessary. God is totally self-sufficient. He didn’t need to give life to the universe. Yet He created we human beings in His image and placed us in a creation which, though marred by our sin, still retains the marks of a Creator intent on providing us with everything we could ever need or want.

But we see the ultimate expression of God’s loving nature in the Person and work of God the Son, Jesus Christ. Jesus told Nicodemus: “For God so loved the world that he gave his one and only Son, that whoever believes in him shall not perish but have eternal life. For God did not send his Son into the world to condemn the world, but to save the world through him.” [John 3:16-17]

You and I deserve death and condemnation for our sin. But Jesus took the punishment we deserve so that all who turn from sin and surrender to Him will have eternal life with God. Only love can explain why an innocent Savior voluntarily bore death in order to save people who don’t deserve saving, in order to give life to those who, without Him, would be separated from God, the Source of life, for all eternity.

“Yes,” we may say, “I believe that God is loving. But what about hell? Would a loving God send anyone to hell?” This appears to be the attitude of many interviewed by Pew Research; more people are willing to believe in heaven than they are to believe in hell.

In answer to our question for tonight, I point to a few facts.

First, Jesus talked three times as much about hell as He did about heaven.

If you don’t believe me, print, say, the Gospel of Matthew, from biblegateway.com. Then, go read the gospel, with two different highlighters in hand, one yellow and the other green. Highlight every time Jesus talks about hell with one color and highlight heaven every time He talks about heaven with the other. This exercise won’t demonstrate that hell is more important than heaven. But it will show that Jesus wanted us to have a clear understanding about the eternal stakes involved in our lives and the lives of those we love when it comes to following Him or not.

Clearly, Jesus believed in the reality of a state of total, eternal separation from God, the Giver of Life.

Second, God doesn’t want anyone to be condemned or separated from Him.

In the Old Testament, God says through His prophet Ezekiel: “Do I take any pleasure in the death of the wicked? declares the Sovereign Lord. Rather, am I not pleased when they turn from their ways and live?” (Ezekiel 18:23)

The whole point of God calling Israel into being was that it would be a light to the nations, pointing the whole world to a saving relationship that only the God we meet in Jesus Christ can give.

The whole point of Jesus coming to earth and dying on the cross, was to save us from separation from God, to save us for life with God.

Third, the Bible shows us that there are many nice people in this world who will choose hell over life with God, heaven.

Do you remember Jesus’ encounter with the rich young man in Matthew 19:16-22? By all appearances, this young man was a nice person. He evidently believed that God is real and kept the commandments that have to do with caring for one’s neighbor.

But Jesus said that the young man lacked something. Jesus could see that the young man’s idol, taking the place of God in his life, was money and possessions. Elsewhere, you know, Jesus says that if anything in our lives causes us to sin, we need to remove it from our lives. So, Jesus tells the man to sell everything he has, give it to the poor, and then, follow Him.

Matthew tells us that: “When the young man [that nice young man] heard this, he went away sad, because he had great wealth.” We don’t know what happened later in that young man’s life. But we do know that as of Matthew 19:22, he had chosen hell over heaven. And Jesus didn’t stop him.

Jesus won’t stop anyone from choosing hell. Truth be known, hell is our default choice as human beings anyway. Unless the saving Word of Jesus Christ is shared with us and the Holy Spirit is unleashed in us through Baptism or the prayers of caring Christians, you and I wouldn’t even be able  to believe in the God revealed in Jesus. [1 Corinthians 12:3; Romans 10:17]

So, does a loving God send people who don’t believe in him to hell?

God loves us and wants us to be with Him forever. But He doesn’t force heaven on us.

As Jesus puts it in John 3:18: “Whoever believes in [God’s only Son] is not condemned, but whoever does not believe stands condemned already because they have not believed in the name of God’s one and only Son.”

Like Lewis, I would love to be able to tell people that no one will go to hell. It would make me more popular. Sadly though, it wouldn’t be the truth.

But it's not because the loving God we know in Jesus Christ sends people to hell. God lets those go to hell who refuse to believe that they need saving or that they need Christ to save them.

Let’s pray and work on that one mission together and individually, every day. Amen

[Blogger Mark Daniels is pastor of Living Water Lutheran Church in Centerville, Ohio. This was the message for this evening's midweek Lenten service. It's the third installment of a Lenten series, Tough Questions.]