A Place, A Hope

[This message was shared earlier today during the memorial service for Jane, a disciple of Jesus who was part of Living Water Lutheran Church in Centerville, Ohio.]

Psalm 23
John 14:1-6
My wife Ann and I first met Jane in August, 2013, when we came for a visit with the people of Living Water for a weekend designed to help the congregation look us over and decide exactly what they wanted to do with us. We knew Wayne a bit from his work on the call committee. But Jane was a new acquaintance.

She struck me immediately as a person of faith in Jesus, good humor, a quiet commitment to serve others (including needy animals), and a live-your-life-come-what-may attitude.

All of those attributes were tried greatly over the last year-and-a-half of her life.

Someone has said that adversity has a way of showing who a person really is. Since the onset of her medical issues, who Jane was could be clearly seen.

She was exactly who she always seemed to be the first time we met her--a person of faith and good humor, a person committed to service who took life as it came to her--and even more.

She was so intent on not having people fuss over her in the period before her death that her passing caught many by surprise.

Wayne, David, Anne, and all of you who make up Jane’s family, we know that you grieve the loss of a loved one who was such a vital presence in all of your lives.

But we pray that you can take comfort from the same faith and hope that allowed Jane to be the person she was, even at the end of her life.

In Jesus Christ, we can all have the same hope and power for living and the power to face dying that we saw in Jane. That’s why the words of Jesus in today’s gospel lesson, John 14:1-6, are perfect.

They’re words spoken by Jesus in a moment a bit like this moment. Jesus is in the upper room with the apostles. He’s made it clear that He is about to die and the apostles are shocked and grief-stricken.

But Jesus assures them: “Do not let your hearts be troubled. You believe in God; believe also in me. My Father’s house has many rooms; if that were not so, would I have told you that I am going there to prepare a place for you? And if I go and prepare a place for you, I will come back and take you to be with me that you also may be where I am. You know the way to the place where I am going.”

Jesus had a place prepared for Jane.

He has a place prepared for anyone who dares to let go of things like our common human desire to be our own gods, our puny imagination’s inability to fathom the possibility of a power greater than us, or our unwillingness to accept the witness of the church’s first martyrs that this Jesus, seen to have been murdered on a cross, was also seen to have risen from the dead. Jesus has a place in His kingdom for anyone who opens their minds, hearts, and wills to Him and His good news.

Jane knew that. Jane lived that. She was one of the people who, by her faith in Christ, let eternity slip into this life, allowing all of us a glimpse of what promises belong to those who believe and how those promises can impact the ways we live, the priorities we adopt, the promises we keep.

Her illness baffled Jane and caused her suffering, to be sure. The nights seemed especially hard for her. But her illness didn’t disrupt Jane’s faith or destroy her hope. She lived in simple, faithful response to the message in the only sermon by Jesus quoted in the gospel of Mark: “The time has come. The kingdom of God has come near. Repent and believe the good news!”

The time has come.

Jesus has died and risen for needy mortals like you and me.

He has prepared a place for all who turn from their sin and receive God’s forgiveness and trust in the gospel message of new life for all who trust in Christ.

It’s time now to turn to Jesus and live with God in our lives.

When Thomas heard Jesus speaking of the place that he was going and that the apostles knew where that was, he was baffled. What was Jesus talking about? Several years into their apprenticeship under Jesus, following Jesus everywhere He went, Thomas still had no idea where Jesus was taking him. “Lord” Thomas says, “we don’t know where you are going, so how can we know the way?”

Jesus answered Thomas, “I am the way and the truth and the life. No one comes to the Father except through me.” To be with the God Who made you and loves you and sent His Son to die and to rise for you, the way is Jesus Christ. 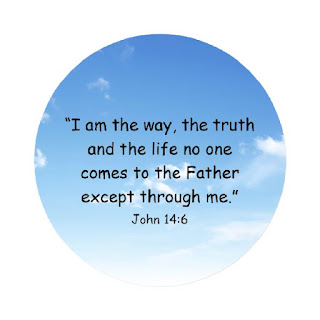 This is not sweet-by-and-by stuff! We can have life with God right here and now. Jesus promises all who follow Him: “I am with you always.” Even now, as you pass through “through the darkest valley.” The Savior Who could not be contained by death is unlimited in His capacity to give you the strength, peace, and hope of God.

King David, writing in Psalm 23, showed that he knew the God ultimately disclosed to all the world in Jesus. That’s why he could say that he feared no evil and that God could comfort him even in darkness.

He can bring comfort to you too.

The apostle Paul once addressed the disciples of Jesus in the first-century church in Thessalonica. The Thessalonian Christians grieved and worried about the eternal destinies of loved ones who had trusted in Jesus but who had died before Jesus returned to the earth. Would they miss out on the resurrection when Jesus returned to the world?

Paul told them that he didn’t want them to grieve like the rest of the human race. They grieved as people, he said, “who have no hope.”

Followers of Jesus grieve. Death is real. Loss is real. Missing those we have loved is real. I spoke with a widow the other day who said of her husband, “I miss him every day.”

But followers of Jesus also have hope.

In Jesus, they know the God Who sustains and encourages the grieving and protects them from despair.

In Jesus, they know the God Who understands our pain.

And in Jesus, they know the God Who has overcome illness, grief, and death, Who has blazed the trail to an eternity with God filled with joy, life as it was meant to be lived, useful work, and utter love.

They know the God Who through Jesus promises that if we will accept the crucifixion of our old sinful selves, sharing in His death, He will share Christ’s resurrection victory over death!

Because Jane followed Jesus, she is experiencing the eternity Christ prepared for her even before she was born.

And I know that if there is one message she would have me share with you today, it would be this: To be comforted, to live life to the full, to face death without fear or cynicism, follow the Lord that has prepared a place for you.