[This was shared yesterday morning during both worship services with the people and friends of Living Water Lutheran Church in Centerville, Ohio.]

Numbers 21:4-9
John 3:14-21
When our kids were small, the one thing we didn’t abide as parents was whining. Whiners, whether they’re children or adults, are telling the world: “I want to be the most important person in this relationship, this family, this business, this world.” “I want life to go the way I want it to go.” Or, like Adam and Eve in the garden: “I want to be like God.”

Whining is especially galling when it comes from people who repeatedly go down destructive pathways in life, then complain that the rest of the world hasn’t been fair to them. A man I know has been married many times and complains that women are impossible to get along with, not once wondering whether the source of at least half of his marital problems might be found by looking in a mirror.

Today’s first Bible lesson recounts God’s reaction to the whining of His people Israel during their wilderness wanderings from Egypt. They had been slaves there. God miraculously freed them so that they could go to the land He had promised them. Throughout their forty year journey to the promised land, the people repeatedly caved into the common human temptation of wanting to do things their own way and to ignore the will of God.

In Numbers 21:4, we’re told: “They traveled from Mount Hor along the route to the Red Sea, to go around Edom. But the people grew impatient on the way…” The Israelites are whining, “Are we there yet?”

Verse 5: “...they spoke against God and against Moses, and said, ‘Why have you brought us up out of Egypt to die in the wilderness?...’” Talk about gall! Here, in effect, the Israelites were saying, “God, why did you answer our prayers and set us free from slavery in Egypt? Why did you take us from a place where we did back-breaking labor for masters who whipped us, beat us, and owned us?” And they’re saying, “Moses, why did you lead us as God directed you to lead us?”

We Christians can be like this. “Yeah, God,” we seem to say, “I know that Jesus died on a cross because of my sins. I know that through baptism and my belief in Christ, You are saving me for eternity. I know that You’ve given me a new life and that nothing can separate me from Your love. But, really God, when are you going to let me call the shots?”

Even we who bear the Name of Jesus and have the free gift of new life through Him, can be world class whiners!

When we whine it’s because we tend to forget two things in our daily lives. First, we forget that we aren’t God. We didn’t invent this amazing thing called life. We aren’t in charge and never should be! The other thing we forget is that, like the Israelites, you and I haven’t yet reached our promised land. Today, we’re in the wilderness. 1 Peter 2:11, tells we Christians: “Dear friends, I urge you, as foreigners and exiles, to abstain from sinful desires, which wage war against your soul.”

Christians are foreigners and exiles. We’re not “there,” not in our real home, yet. So, we shouldn't put too much stock in the things has to offer. Everything that we may want that is in this world has an expiration date.

Until we get to our real home, things won’t be perfect. The moment we are baptized in the Name of the Father, Son, and Holy Spirit, we are no longer citizens of this world. We're just passing through. We can expect to be attacked by the tests and temptations that come from, as Martin Luther puts in The Small Catechism, “the devil, the world, and our sinful selves.” This world isn't perfect and never will be.

Thankfully. our ultimate destination is not in this wilderness. Our destination as believers in Jesus is what the New Testament book of Hebrews calls “a better country,” the eternal kingdom of God. This fallen world, wonderful though it can be, is a faint hint of the perfect, sinless, eternal new creation God is preparing for us. I often think of (and quote) Jesus’ words in John 16:33: “In this world you will have trouble. But take heart! I have overcome the world.”

Now, go back to Numbers 21:5. The people are still whining: “...There is no bread! There is no water! And we detest this miserable food!’”

The “miserable food” they’re talking about is the manna that God had been giving them virtually every day of the forty years they were in the wilderness.

To get the manna, they never had to plant a single seed, water a single sprout, or remove a single weed.

Like every blessing that God gives to us and that we take for granted--from breathing all the way to everlasting life for those who trust in Christ--the manna was simply there for the taking. It was a gift of grace.

The Israelites wanted more! In itself, there’s nothing wrong with wanting more good in our lives. But in our wilderness, in this life, God wants to teach us to not let our desires supplant God in our priorities. God wants to show us that nothing this world may offer us can match the gifts God wants to give to those willing to receive them by faith in Him.

God wasn’t happy to hear His people whining yet again. It was a sign of faithlessness and sin. Numbers 21:6-7: “Then the Lord sent venomous snakes among them; they bit the people and many Israelites died. The people came to Moses and said, ‘We sinned when we spoke against the Lord and against you...’”

But the people were awakened by God’s action. In verse 7 says that the people asked Moses to pray for them. Moses did. Now, look at verse 8: “The Lord said to Moses, ‘Make a snake and put it up on a pole; anyone who is bitten can look at it and live.’”

What a weird prescription!

Why was this God’s fix?

In the hymn Amazing Grace, we sing, “‘Twas grace that taught my heart to fear and grace my fears relieved.”

Before we’re ready to receive the undeserved grace of God and the forgiveness of our sins, we have to be aware that we have sin that needs to be forgiven.

Before we can have our relationship with God restored, we need to know that we’re separated from God.

As you've heard me say before, God doesn’t force forgiveness and new life on us. We must receive it by faith. When the Israelites turned to the bronze serpent, they were reminded that their sin was what triggered their situation. Forgiveness, healing, and life could only come to them when they acknowledged their sin and trusted in God.

Now look, please, at John 3:14-15, from today's Gospel lesson. Some 1500 years after the incident in our first lesson, Jesus is speaking to Nicodemus: “Just as Moses lifted up the snake in the wilderness, so the Son of Man must be lifted up, that everyone who believes may have eternal life in him.”

In the wilderness, the bronze serpent became the repository, the scapegoat, for the rebellion and sin of God’s people and through their honest repentance, the means God uses to turn their attention and allegiance back to Him so that they could be restored.

In our own wilderness, it’s easy for us to wander away from God, to get caught up in our own agendas, to think that God has wandered from us. It’s easy for Christians to say, “I know what God says about sexuality, or covetousness, or loving others, or trusting alone, but I just don’t agree with Him.” (As though anyone can disagree with God!)

That’s where the Savior on a cross comes in. 2 Corinthians 5:21 says of Jesus: “God made him who had no sin to be sin for us, so that in him we might become the righteousness of God.”

Jesus volunteered to be the repository, the scapegoat, for our sin.

He calls us to turn our eyes away from the wilderness and turn instead to Him.

Every time we picture Jesus on the cross and remember again that He had no sin, but that our sin--your sin and my sin--put Him there, we’re forced to acknowledge our need of Him.

We confess our sin and we put our trust in Him alone. When that happens, our faith in Him is renewed and the life and forgiveness that only Jesus can give floods us once again!

The wilderness in which you and I live each day can be hard. But God lets us decide whether he or our sin have the last word over our lives. Look at Jesus‘ words to Nicodemus in John 3:16 to 18:

While we’re here in the wilderness we will never have all of life’s answers. But it’s clear to me that life without Jesus leaves us with nothing to hope for, while life with Jesus is filled with God’s presence now and with hope for eternity with God.

A man rode a unicycle on a taut rope above Niagara Falls. “I couldn’t have done it,” a friend told him. “Every time I pedaled, I’d see 167-feet of churning water below me.”

“If that’s what I’d looked at, I couldn’t have made it across, either,” the unicyclist said. “But I was focused on the solid ground ahead.”*

Keep your focus on Jesus, our solid rock.

He will forgive your sin.

He will stand by your side.

He will lift you up.

And He will give you life, here, now, in the wilderness...and beyond. Amen 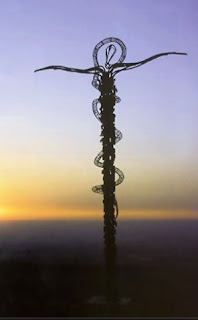 [This sculpture, conflating the bronze serpent on a pole about which we read in Numbers 21, with Jesus' crucifixion, is a memorial to Moses on Mount Nebo. Mount Nebo is the place in the last book of Deuteronomy from which Gods allowed Moses to see the promised land before he died.]

*This story is fictional, although several people have walked or taken wheelbarrows on tightropes above Niagara Falls and others have ridden unicycles on ropes strung between skyscrapers. The words of the fictional unicyclist are consistent with what such daredevils often say.