Why Shepherds? Why You? Why Me?

[This is the message prepared for last evening's Christmas Eve services with the people and friends of  Living Water Lutheran Church in Centerville, Ohio. But something the nurse practitioner at the doctor's office called viral gastroenterits hit me yesterday, meaning that I shouldn't be around people. Living Water's worship and music director Mark Brennan shared the message while doing all of his other work. Thank you, Mark!] 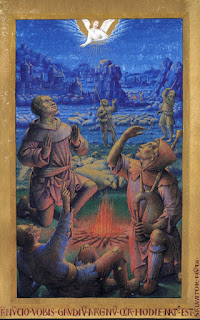 The accounts of the first Christmas in Matthew’s and Luke’s gospels are filled with characters.

Of course, there’s Jesus, God the Son Who comes into the world as a baby Who will one day die and rise to give forgiveness and everlasting life to all who believe in Him.

There are Mary and Joseph, the couple chosen by God the Father to be Jesus’ earthly parents.

There’s Caesar Augustus, the most powerful of the Roman emperors, who ordered a census in his conquered territories, meaning that to register, Joseph and Mary, both descendants of David, had to travel to Bethlehem, where the Old Testament prophecies said the Messiah would be born.

There are the angels and the animals.

Later, there are King Herod, and scribes, and wise men from the East who, following a portentous star, arrive sometime after Jesus’ birth to bring gifts to the Baby they perceive to be a King.

In their way, the appearance in the nativity histories of each of these characters makes sense.

It’s easy to understand why Mary and Joseph are in the story.

Easy to understand too the presence of Caesar, who turned the lives of ordinary people upside down when he ordered them to walk distances of eighty miles or more just for the privilege of being taxed by a foreign overlord. That order meant that Jesus would be born in the right place.*

It’s even easy to understand the presence of the livestock.

Unlike kings, emperors, and wise men though, the shepherds had no earthly power. Shepherds were poor. Shepherds had no influence. They were vulnerable. And they were thought of as among the lowlife of society. No Judean child thought, “When I grow up, I want to be a shepherd.”

And unlike the animals at the manger, the shepherds would not have been physically close to the place where Jesus was born. They had no reason to be in Bethlehem; their place was in the fields.

Yet it was to shepherds keeping watch over their sheep that God sent an angel to announce the birth of the Savior of the world.

But God must have thought the angels were important on this night.

And just in case the shepherds thought the angels’ message was really for someone else, just like all the other good news and happy blessings of the world always seemed to be, the angel’s message could not have been clearer. He tells the shepherds: “...I bring you good news that will cause great joy for all the people. Today in the town of David a Savior has been born to you; he is the Messiah, the Lord. This will be a sign to you: You will find a baby wrapped in cloths and lying in a manger.” (Luke 2:10-12)

The shepherds weren't a Christmas afterthought on God's part. It's significant that the angel didn’t go to the powerful king, priests, or scribes in Jerusalem to let them know. The big shots in Jerusalem were too busy being big shots to rejoice over an angel pronouncing the Messiah’s birth. Besides, as Matthew tells us, it was these elites who regarded Jesus as a threat and determined that any newborn Messiah would need to be exterminated in his crib.

The shepherds have none of what the Jerusalem elites have.

They have no power, perks, or comfort.

Like the poor and weak of every age, their daily lives show them how vulnerable and fragile they are.

And it is precisely to people who see their vulnerability that Christ comes.
God sent the angel to announce Jesus’ birth to the shepherds and so fulfilled what Mary, the virgin chosen by God to be Jesus’ mother, had said would happen when the Messiah arrived.

She had told her kinswoman Elizabeth that her soul magnified God because “He has brought down rulers from their thrones but has lifted up the humble. He has filled the hungry with good things but has sent the rich away empty...just as he promised our ancestors.” (Luke 1:52-53, 55)

God comes to those willing to cast aside their delusions of self-sufficiency, self-importance, and self-righteousness.

The God we know in Jesus comes to those willing to pray, “Hallowed by Your name, Father. Your kingdom. Your will be done, Lord.”

It is to  just such people that our Savior comes today so that He can raise them with Jesus.

Friends, the angel’s “good news of great joy” is for you. The Savior Jesus will give never give life with God to those who are too busy being busy or pretending to be self-sufficient to hear His call to new and everlasting life. But Jesus does give life to those who, like the shepherds, listen to God’s voice and follow where Jesus leads.

And Jesus does give life to those who, broken by the knowledge that they are sinners in need of a Savior and made new by the Gospel Word that God so loves the world--God so loves you--that He gave His Son to live, die, and rise for you, replacing your sin and death with His righteousness and His risen life.

To you this day Christ has come.

To you every day Christ comes.

Run to Him when He calls you, then tell the good news of the Savior Who, unlike kings or scribes or presidents or emperors, is always and forever and totally for you.

God knew that that message would mean everything to the shepherds and that because of it, they would run to see the baby and then tell others about the Savior.

May the angels’ message given on the first Christmas mean everything to you and me too, so that every day, we run to spend time with Jesus and every day, we point others to Jesus.

*Eighty miles is the approximate walking distance from Nazareth to Bethlehem.

[I'm the pastor of Living Water Lutheran Church in Centerville, Ohio.]
Posted by Mark Daniels at 11:06 AM